On Tuesday morning about 300 miles off the coast of Oregon, an intense swarm of moderate sized earthquakes began on the Blanco Fracture Zone (BFZ). This is active, unusual, and interesting, but not concerning. Let’s take a deeper dive.

As of the writing of this blog (Dec 9, noon), 88 earthquakes have popped off on the Western extent of the Blanco Fracture Zone. Fifteen have been magnitude 5.0 and greater with the two largest events being M5.8. The smallest (reported) earthquake is M3.2 though there surely are many smaller ones, but the seismic stations used to detect and locate the events are 300 miles away on land. At those distances, the ground motions from smaller earthquakes will fall below background noise levels and thus go undetected. The magnitude scale is logarithmic, such that a M5.0 earthquake releases 32 times the amount of energy as a M4.0, so the vast majority of action has been properly detected, characterized and cataloged. Note that while the USGS lists all of the event depths as 10 km, their actual depths are best described as “shallow”. Constraining depths with data from stations far away and for shallow events is very difficult, so 10 km is just a default number given for shallow events with source-station geometries like we have here. 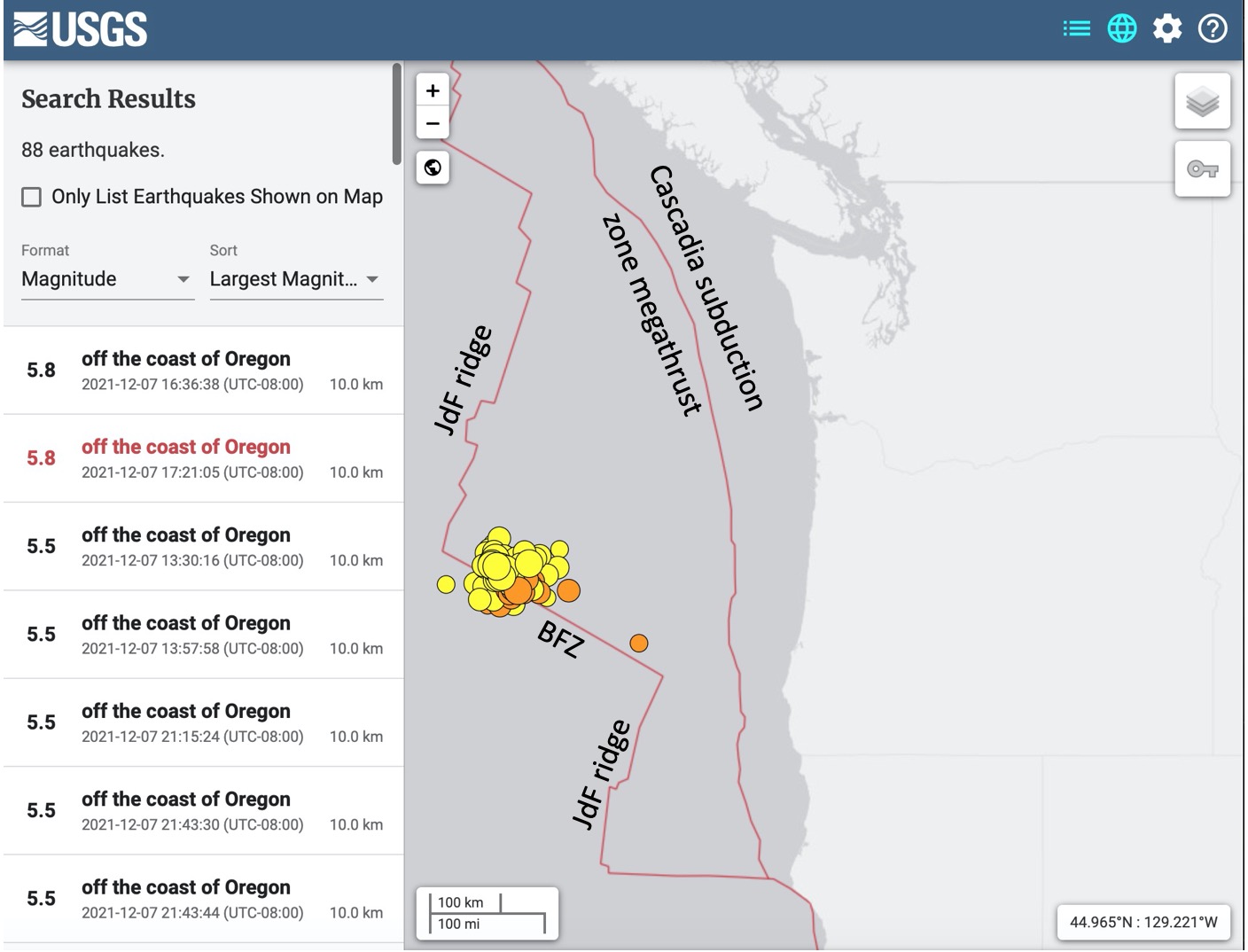 Map of earthquakes within the swarm from earthquake.usgs.gov with the most recent events in orange. While the seismicity appears to be a cloud scattered about the BFZ, the actual locations of the events are likely much more linear. The events are difficult to precisely locate since all of the stations that locate the quakes are at least 300 miles away and to the east. 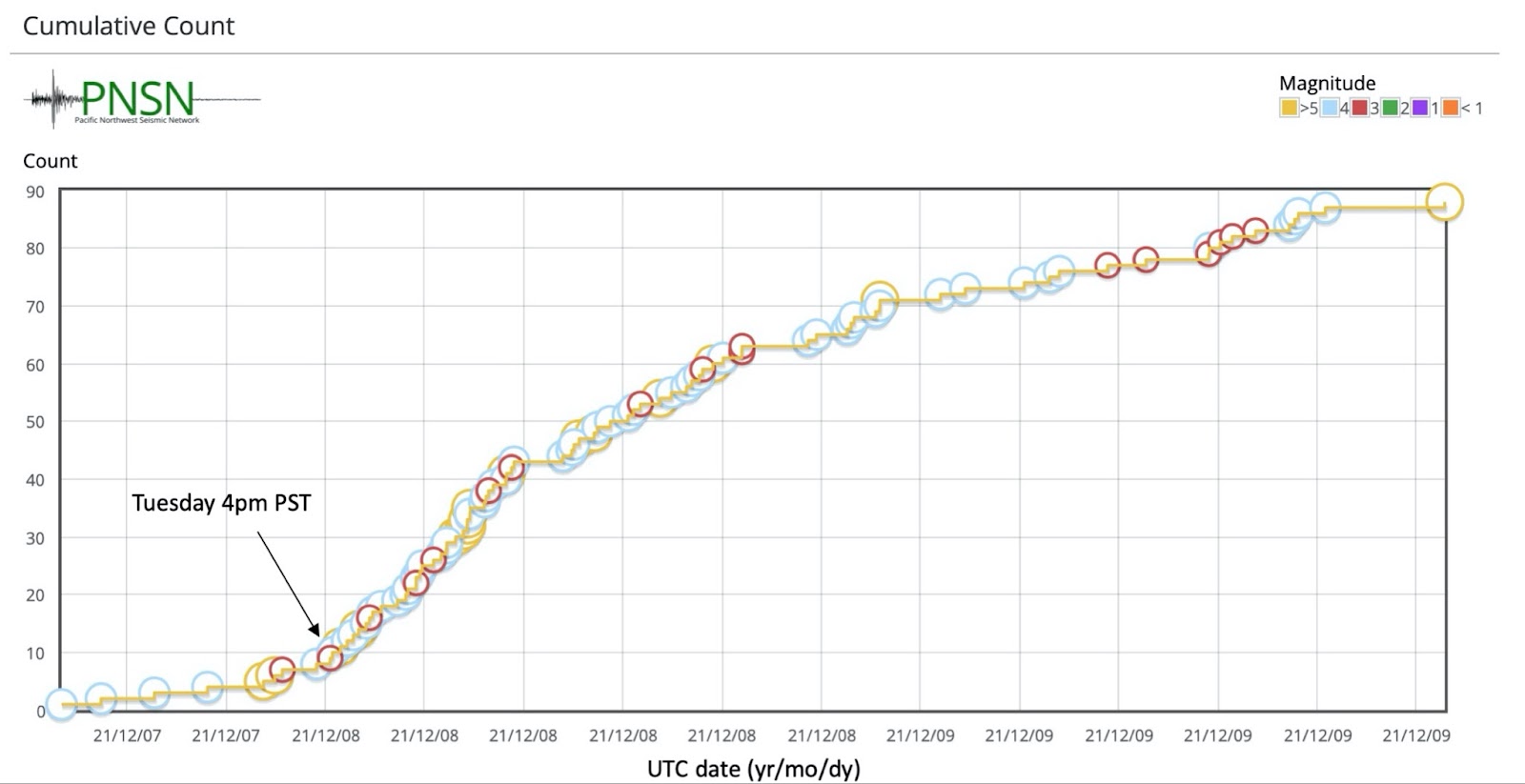 Figure of cumulative count of earthquakes over time from December 7 to December 9 (UTC time) from pnsn.org/earthquakes/recent (--> Analyze). The most intense period of time was on Tuesday when there were around 40 earthquakes from about 4-8pm PST.

How unusual is this? In the history of well-recorded M4.5 and greater earthquakes in this region, which is about five decades long, there have been many other swarms, including in the summer of 2019 when the largest event was a M6.3. However, there has not been as active a swarm as this one in terms of number of moderate sized events (see the figure below).
What defines a “swarm”? It’s a nebulous term that generally means a group of earthquakes close in space and time, depending on the background seismicity and how long a time window you are considering. Those can vary greatly, but in general we talk about swarms as being within a distance of a few rupture lengths of the largest event(s) and lasting a few days in time. What are the rupture lengths of these events? The two M5.8s probably had rupture lengths of a few miles long, which may have seen slip of maybe a foot or so. If these events were on land and you were nearby, 24 magnitude 4.5-5.8 earthquakes within a day would be a lot of shaking!  And maybe some cracked streets and foundations and a few broken plates, but probably not collapsed buildings. 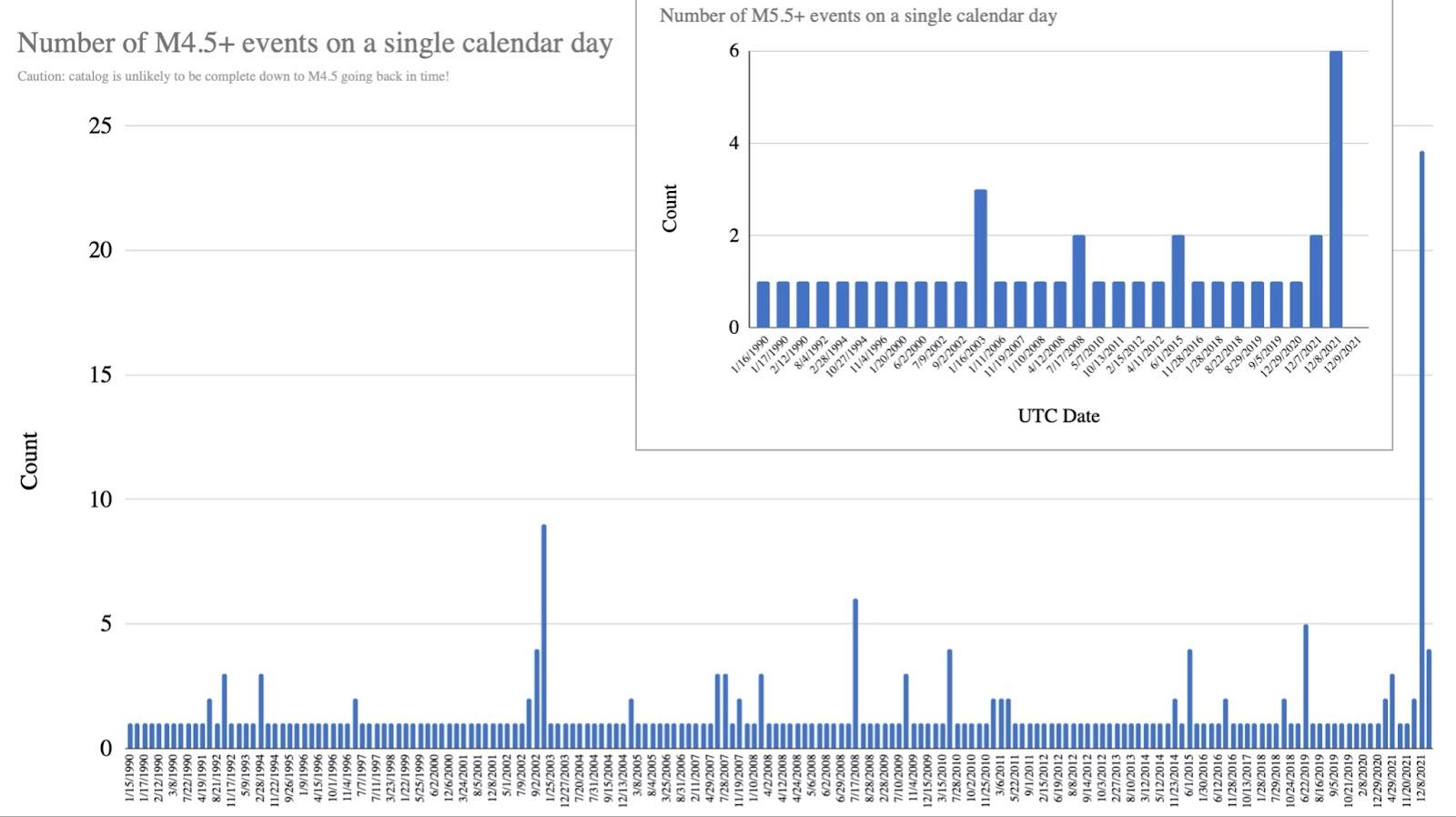 Figure showing the count of BFZ earthquakes greater than M4.5, and inset: greater than M5.5, within one calendar day over the last 30 years. Note that the dates along the horizontal axis aren’t regularly spaced, but rather just sequential. However you plot it, it’s clear this swarm is much more productive in terms of number of earthquakes than any of the others.

So how does this swarm compare to others? The figure above clearly shows many more events, but simply counting earthquakes doesn’t tell the whole story. What seismologists usually care about is total energy release - OK fine we actually care about moment release, but energy is good enough here (check out this USGS seismo-lingo cheat sheet).  Remember that 32x difference in energy release for every magnitude unit?  Well if you add up all the energy released from these 88 events, it would be about as much as from that one M6.3 in 2019, which saw no follow up increase in seismicity on the Cascadia Subduction Zone (CSZ). Even a M7.0, which may have a rupture length of about 20 miles, on this western segment of the BFZ would be unlikely to significantly load the CSZ, though that’s based on observations of earthquakes that didn’t happen following other earthquakes far away.
The slip on these earthquakes are unlikely to have caused significant changes in stress along the Cascadia Subduction Zone 200 km closer to shore, which in the past has produced M9 earthquakes as recently as January 26, 1700. This is true for a few reasons:
1) Changes in static (background) stress following earthquakes don’t reach very far, maybe only a few rupture lengths; remember the largest rupture in this swarm was likely, at most, only a few miles long. There can also be dynamic changes in stress as the shaking from seismic waves pass a loaded fault ready to go, but this usually only follows truly massive M8+ earthquakes and the triggered earthquakes are usually small.
2) This region is characterized by young crust freshly born (geologically speaking) at the nearby Juan de Fuca Ridge. Young crust will “absorb” changes in stress more than brittle old crust - think of applying stress to a gooey cookie fresh out of the oven that easily breaks into many small pieces rather than a week-old brittle cookie that breaks in half. So basically, the CSZ sitting 200 km away across relatively gooey crust, would unlikely notice the equivalent of a M6.3ish earthquake (all 88 swarm events combined).
By the way, 1) is much more important than 2) with the distances involved. It’s as if a baby was screeching right next to you at the dinner table, in what seismologists call the “near field”. Your ears would hurt and there would be significant stress changes (ha!). But if you’re a few houses away, in the “far field” like the CSZ is to these events, the only way you’d know something happened was if seismo-dad gave you a link to a recording of the screeching which would be far less stressful and maybe even enjoyable.
Got tsunami? Tsunamis are generated when a not-small chunk of the seafloor moves up or down in an earthquake or underwater landslide. The BFZ is a transform fault boundary, like the San Andreas Fault, where the relative motion across the fault is horizontal. So no vertical movement, and no tsunami.
In summary, there was a pretty interesting swarm of 88 earthquakes way out offshore, but the hazard along the Cascadia Subduction Zone is not measurably higher today than it was at the beginning of the week. The Pacific Northwest is still earthquake country so stay prepared - check out this great earthquake kit. And if you feel shaking or get a ShakeAlert Message: Drop, Cover, and Hold On.

Dec 16 update:
In the past 6 days since the blog was published, there have been only four earthquakes with magnitudes between 4.1-4.5 and not surprisingly, no change in activity on the CSZ.