With the numerous big quakes around us in the last few weeks: the M7.7 up the coast; the M6.3 off Vancouver Island; and the M7.4 with loads of aftershocks near Guatemala, we've been struck by the quiet in Oregon and Washington since network manager Paul Bodin and I arrived in 2006.

I've been meaning to explain that Canadian M7.7 earthquake in the next blog, but I don't understand myself, yet.  It was a thrust event right next to a strike-slip fault, and I'm waiting for the Canadians to explain that to me so I can explain it to you.  The Canadians, in turn, have responded by installing numerous temporary instruments in the epicentral region, which will doubtless illuminate the fault system well, but will require a few weeks or months until we see the results.

The PNSN cannot be given credit for the peace and quiet.  Furthermore, given the variety of locations that earthquakes struck, most of these 10 earthquakes are unrelated to each other.  Our peaceful 6 years has been due to random chance.

Here is the map view of these M3+ earthquakes - they cover our region.  These are the earthquakes large enough to reliably feel, if one is close enough to the epicenter. 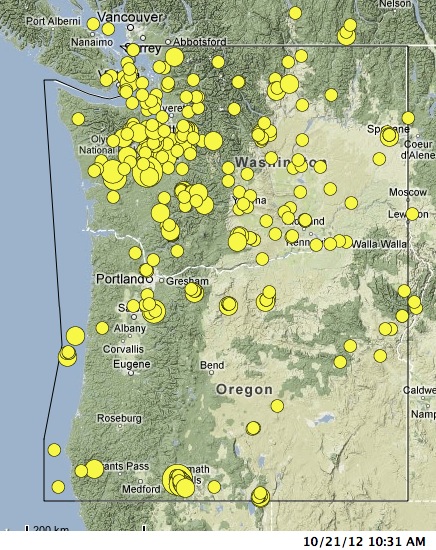 The real point is that, on average, we expect $500M a year in damage from earthquakes each year in Oregon and Washington.  That's the average, but in most years, there is $0 damage, and a few years are horrific.  The Nisqually quake was a relatively mild earthquake, yet in 2001 we had several $B in damage.

And so we stay vigilant and watch.

(You can make any of these plots yourself and see which earthquake is which with the Custom Search option under Earthquake on the left PNSN menu.)