Our coast, like other subduction zones around the world, rattles in M9 earthquakes every few centuries.  The stark results of M9 events in 2004 in Sumatra and 2011 in Japan have made forecasting the likelihood and details of our local megaquakes a priority for geologists, emergency responders and planners.  People near the red lines with the little teeth below are all in a similar predicament. 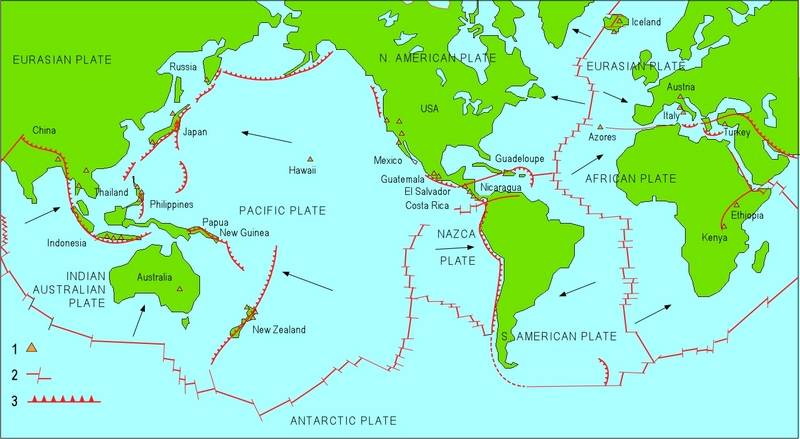 We are fortunate here in the Pacific Northwest to have a fairly good idea of the last 10,000 years of large earthquakes, much longer than available almost anywhere else.  This history comes from geologists’ studies of on- and offshore stratigraphy, which is the layering of the soils at the surface and at the seafloor, in combination with geochemical tools for dating the layering.  Earthquakes leave distinctive disturbances and deposits.  Chris Goldfinger at the Oregon State University and Brian Atwater with the USGS in Seattle are the two leaders in this subject, which is termed paleoseismology.

Paleoseismology is invaluable because without it, we would have only a vague idea of the recurrence intervals and rupture patterns.  The theory of earthquakes combined with mapping where are the faults cannot substitute for direct paleoseismic observations to see how faults behave.

We see 19 earthquakes in the last 10,000 years that ruptured the entire length of the Cascadia fault, which requires roughly an M9 event to shift the 1000km coastline by the 10-20 meters expected.  The last one, in 1700AD, was not proven until the 1990s.  The interval between events has been observed to vary from 200 to 800 years, so if the future is like the past, the event is likely to hit any time from now until 500 years from now.  The long thick lines in the figure are these biggest events.  This and the last figure are from a recent review of the history of faulting along Cascadia inferred by Prof. Goldfinger.

With each passing year, according to models constructed from the history this and many other faults, the odds of the “big one” rise each subsequent year that no earthquake happens as the stress on the fault rises.  Now, after 311 years without an earthquake, the odds are about 50% higher than the long-term average, about a 1 in 350 chance each year, or about a 15% chance every 50 years.  Even after a long hiatus, however, the odds only rise to about double the long-term hazard.  Thus, claims of faults being "10 months pregnant" implies an inaccurate model, odds never skyrocket.

There are three unfortunate complications about the “big ones”.  (1)  It is conceivable that the interval between events changes over time – perhaps there are thousands of years during which the average recurrence is shorter, while during other intervals the recurrence rate is longer.  This is a clustering model, and has been claimed for Cascadia in some studies.  Unfortunately, if there is clustering, it is not clear whether we are now in a cluster or just past a cluster, and the distinction makes a difference in the current danger by a factor of two.

(2)  Perhaps not all great earthquakes rupture the entire subduction zone at once.  It could be that some recurrences take the form of a string of smaller events, perhaps three M8s, for example, different than the entire-fault event in 1700AD.  Such cascades of ruptures have been seen on other faults.  If I were bold enough, I'd guess that 1/3 of the recurrences might consist of such cascades.  Any but the last of the thick lines in the figure above could be such cascades rather than a single huge earthquake.

(3)  Isolated M8 to M8.5 events occur in addition to the biggest events, not as part of an unzipping of all Cascadia.  Paleoseismic work has identified 20 such potential great but not super-great events in the southern half of Cascadia, and a few in northern Cascadia.  These 20 are shown as the thin lines in the figure above.  So far, about 10 of the southern events are well-enough observed to inform hazard maps, which raises the odds of strong shaking in the southern half of Cascadia.  The elevation of the southern danger is enhanced because the more complete picture of both whole and partial Cascadia ruptures make the southern stretch more “overdue” than the north.  The south faces a 20-25% chance in 50 years (35% if all 20 of the claimed M8+ events are proven) of great earthquake shaking, compared to 15% in the north, which only anticipates shaking in the entire-fault ruptures.

Another confusing aspect is the use of various different statistics.  The relevant one is chance of an earthquake in the next interval of time, which we've given above.  One could also usefully consider numbers such as "80% of the time, the interval of time between great earthquakes in southern Cascadia is less than the time since the last event".  This may be true, but gives no indication of the current danger, which instead depends on how the fault behaves, given that it has not moved in the last 310 years, which is a different question, technically called a conditional probability.

Unknown details also matter to the danger, if not the odds of a quake – the precise area that breaks, how energetically it snaps when it breaks, whether the shallow fault movement makes a big tsunami, and even the time of year for the severity of triggered landslides, and of course how well we have prepared, for example, but the big picture has been clearing up in the last two decades.

Knowing the odds does not tell us when the next quake will come, however - it still could be tomorrow or it could be 500 years away.