On Feb 25, 2014 a strong seismic signal lasting a couple of minutes was observed on all the seismic stations on Mount Rainer.  The figure here shows seismograms from several of the high stations on Mount Rainier for about the first minute of this event.  The tics at the top are one second marks.  This event had impulsive enough first arrivals to time them and get a rough location near the top of the Nisqually Glacier. 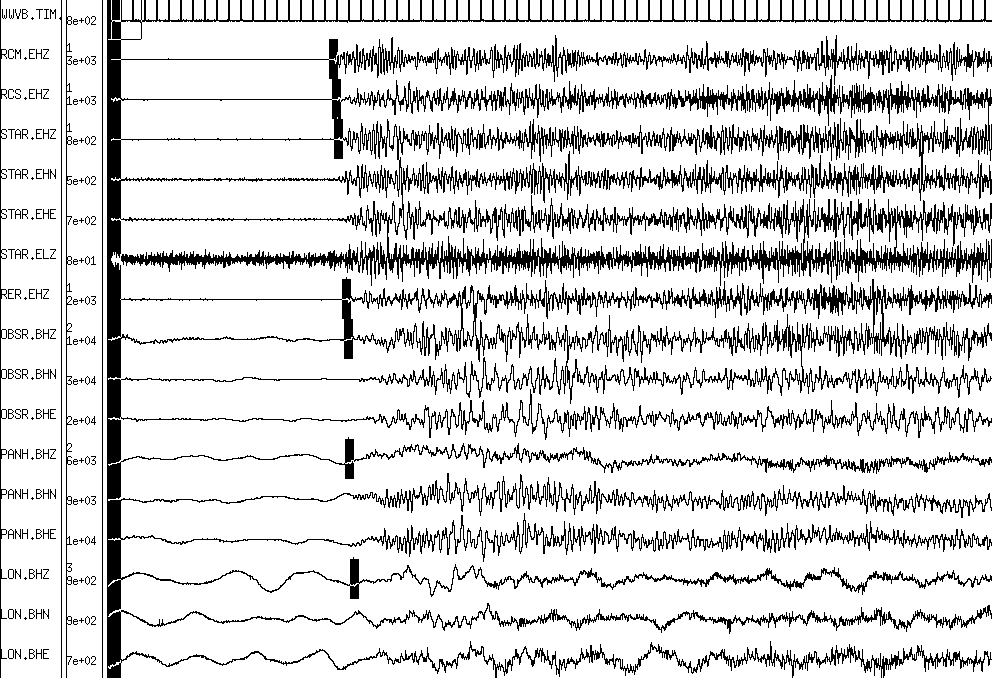 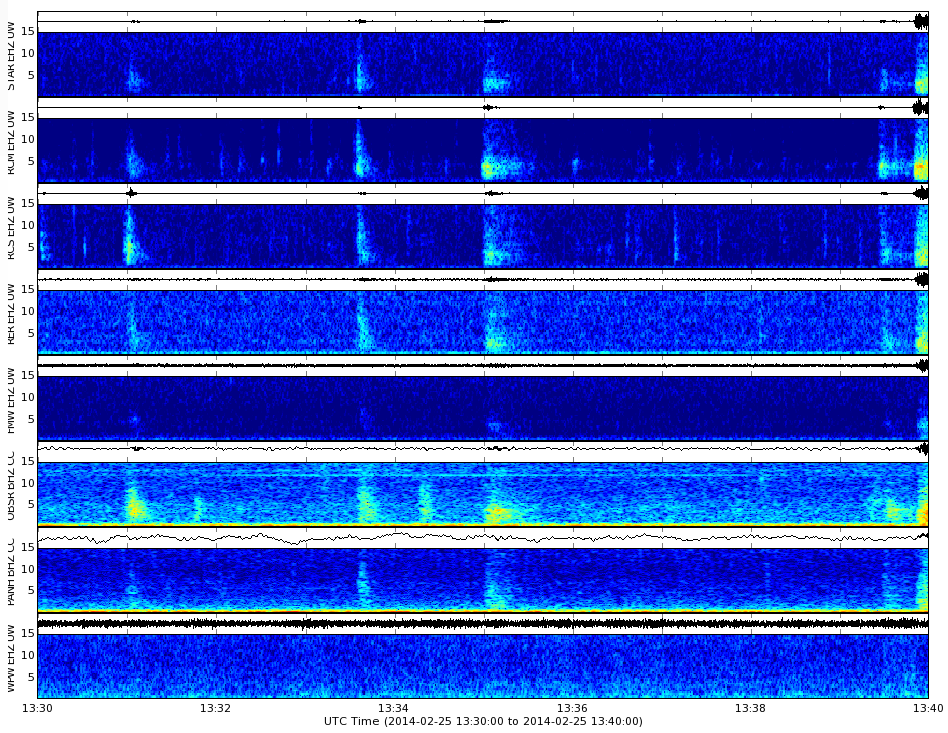 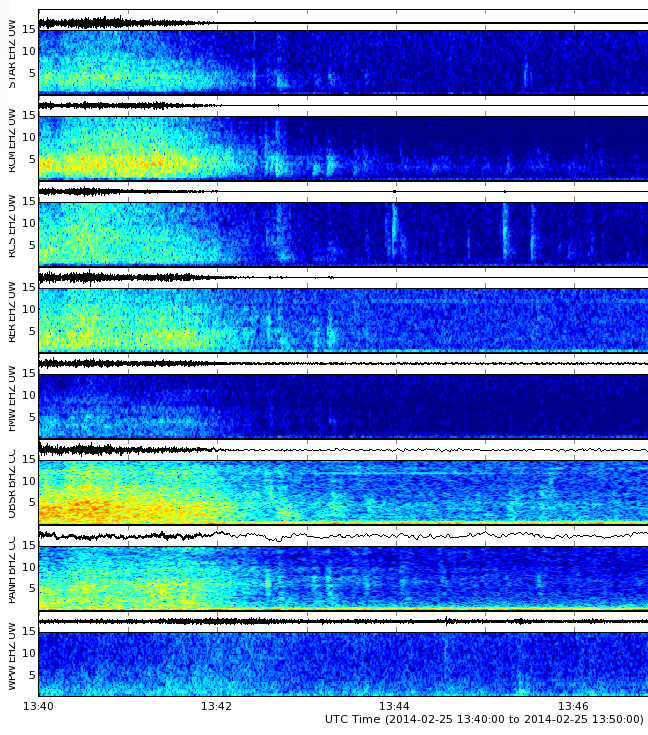 Seventeen minutes of spectrograms are shown in these next two figures.  The main event starts at about 13:39:49.5 UT (05:39 AM PST).  However, at least three much smaller events but similar spectral content can be seen in the previous eight minutes and there are no events of a similar nature following the main event.  As Jackie Caplan-Auerbach of Western Washington University has reported from studying ice avalanches on Alaskan volcanoes, increasing numbers of small events preceding the main one probably represent increasing slip at the bed of a glacier near its calving front.  Once a main block has broken loose and avalanched the ice left behind is again stable and so the seismic events stop.  This interpretation is based on the seismic records alone but we are fortunate in this case to have some "ground truth" by way of photos taken the day after the event. 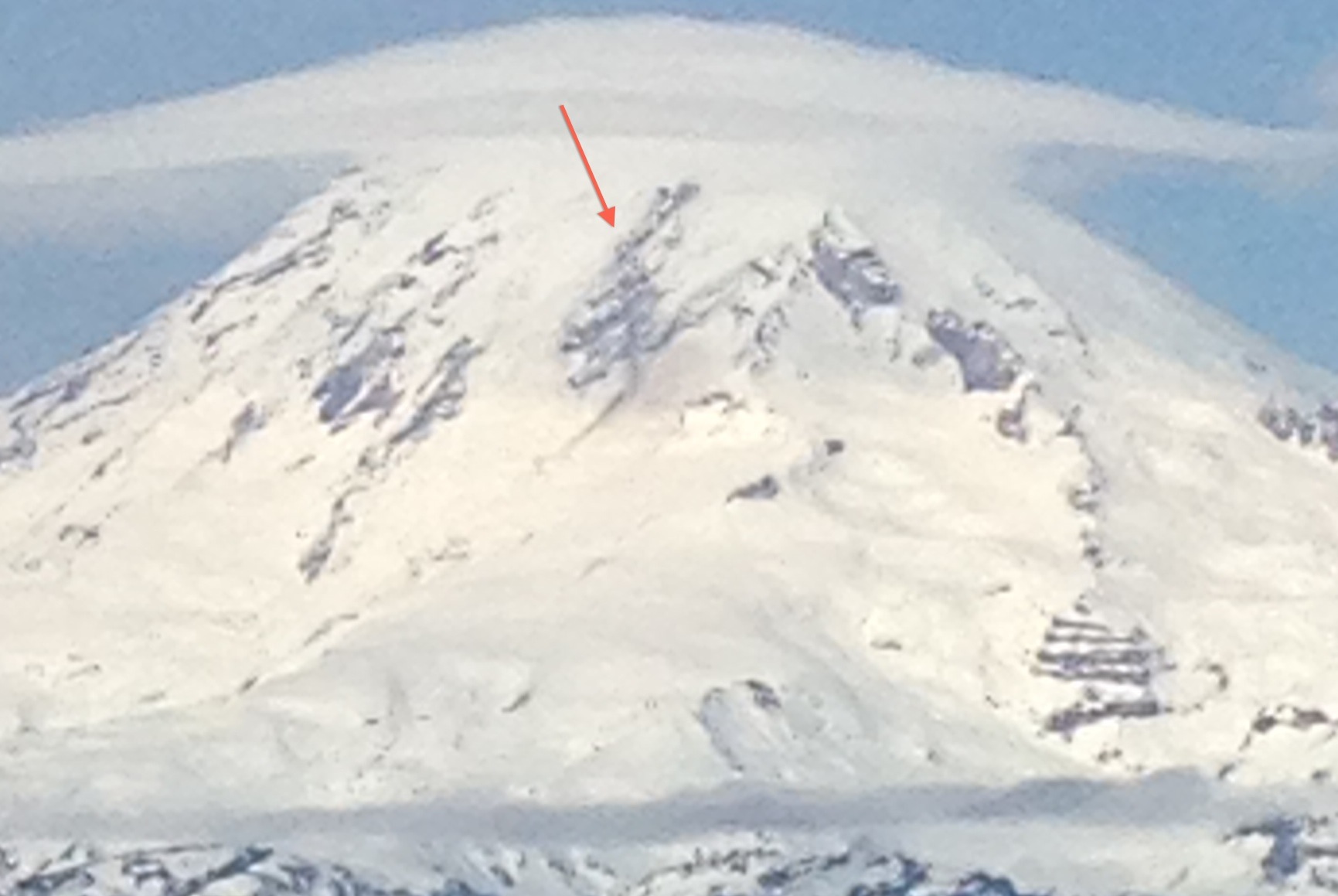 Here is a photo taken by Scott Beason (Rainier Park geologist) from near White Pass (ie looking north-west).  The red arrow points to an area just above the Nisqually Cleaver about where the seismic event was located.  Note the discoloration starting in this area and spreading down onto the main part of the glacier below the Cleaver.  Our model is that as a large ice block fell down the steep slope where it entrained rocks and soil as it broke into pieces.  Hitting the main glacier below it spread out entraining more snow and thus dissipating the discoloration. 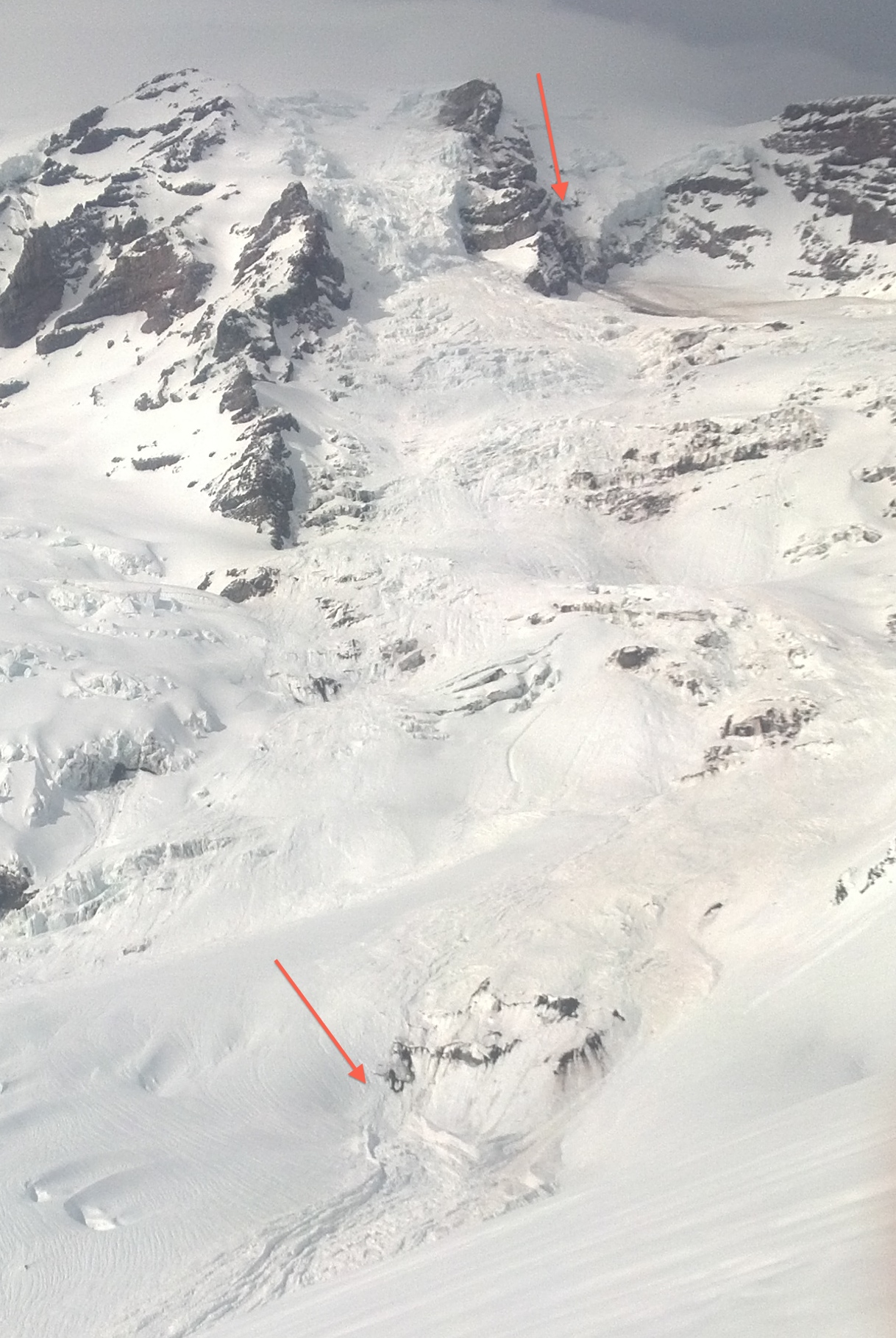 A closer photo taken from Glacier Vista above Paradise in the Park by Carolyn Loren, a seasonal Park ranger on a snow shoe trip, shows some of the same features but also shows that the slide transitioned into a more conventional snow avalanche (complete with fracture lines) and then a wet snow slide as evidenced by the large levies showing up in the lower, flatter part of the glacier. It appears that this slide terminated somewhere around or slightly below Glacier Vista a distance of about 4 km from the source.  The seismic records indicate it lasted a little over two minutes, say 140 seconds and so the average speed of the avalanche was about 100 km/hour (60 miles/hour).  It certainly would be faster than that for the first part where it is in near free fall but much slower than that in the very lowest part where the levies are being built.

Besides the Mount Rainier event there was one on Glacier Peak on Feb 27, 2014 at about 12:55 UT (04:55 AM PST).  The figure here of a spectrogram shows it only on the seismic station GPW located high on the west flank of Glacier Peak.  Because no other seismograms recorded this event (the next nearest station, WRW was down at the time) we can not located it other than to say it was on Glacier Peak.  Note on the spectrogram that there are many events preceding the main event and nothing afterward.  Thus, like the Rainier event we suspect that this was an ice avalanche, but smaller than the Rainier one.

We feel these ice initiated avalanches have some seismic characteristics that are different than pure snow avalanches or rock falls.  A large snow avalanche last fall on Mount Baker also generated a strong seismic signal but does not show the small precursor events such as the two events reported in this blog.  That Mount Baker avalanche and other snow avalanches observed seismically in the past on other mountains may also entrain rocks and soil and look very impressive in photos but likely have a different initiation process than the ice triggered ones. Both of these sorts of events are also very different from the rock-fall/debris-flow avalanches such as the one on Mount Adams in 1997. Such events can have similar looking seismic signals but typically will be much larger and recorded over a very large area.

After writing up my observations of this event I got some additional information from Stefan Lofgren, Rainier Park Climbing Ranger, who went up to Camp Muir on Feb 28 and observed the avalanche deposits from close up.  He sketched the extent of both the ice/rock fall avalanche and the snow avalanche and could determine that they were NOT directly related.  That is the deposits of the two are distinctly separate.  Thus the ground truth here suggests that my previous interpretation above is wrong. 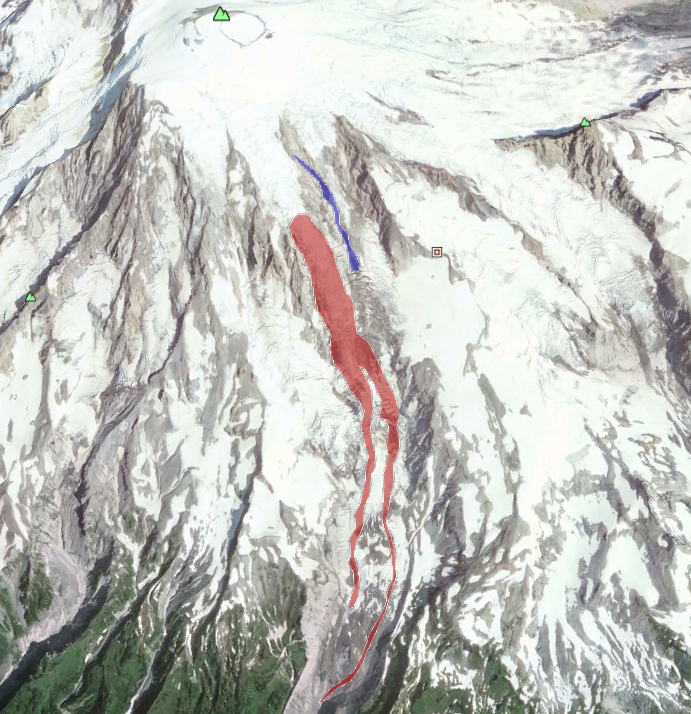 The figure here is a Google Earth image showing Stefan's estimates of the extent of the two different slides (blue is the ice/rock avalanche, orange the snow avalanche-flow).  I had previously assumed that these two morphologically different deposits were from the same event.  Bad assumption.  Besides being chagrined at my incorrect assumption I am left wondering how to interpret the seismic records.  It is possible that these two events occurred at totally different times.  However, on the seismic records I can find no other signals that might be interpreted as the snow avalanche.  Its possible that it was not energetic enough to show up but the RCM station is only about 1 km away from its nearest part so it should have had a signal.  The snow avalanche may have been remotely triggered by and thus almost simultaneous to the ice/rock-fall avalanche.  However the seismic signal doesn't last long enough to explain the whole thing. 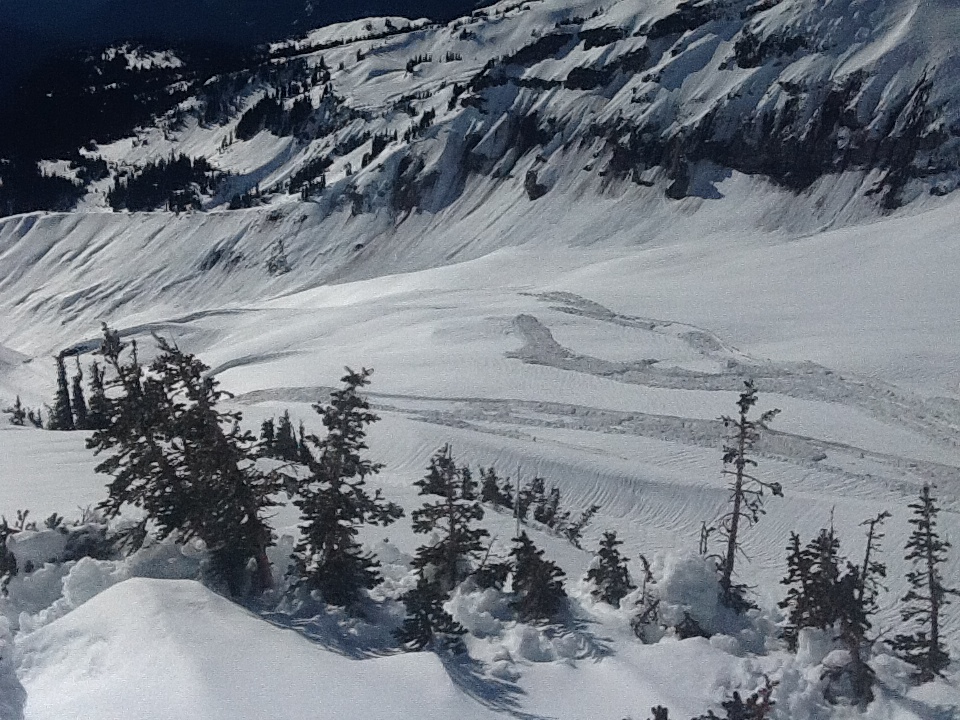 From Stefan's mapping and some photos (shown here) it seems this flow went all the way to and beyond the terminus of the Nisqually a distance of ~ 4 km.  If the whole thing was seismically recorded this would imply an average flow speed of ~100 km/hour, much faster than such wet snow-flows are known to travel.

Thus (as is often the case in science) we are left with a quandary as to how to explain the seismic signals in light of the other observations.  Plans are under way here in the lab to find and catalog other avalanches with seismic signals and see if looking at more cases will help with our interpretations.

We are greatly indebted to Mount Rainier National Park staff for assisting with interpretation of such events in the Park.