How big was that earthquake?

How big was that earthquake?

As background there exists a very good previous blog by Paul Bodin (PNSN Network Manager) about "how earthquake magnitude scales work".  In a nutshell, our legacy (pre-2012 and our use of the standardize AQMS system) magnitude estimates were always determined by the Coda duration (Md) technique.  Back in the 20th century many of our stations were not calibrated nor broad-band, thus using amplitude methods for size determination were not possible.  The duration of seismic shaking at many of our stations provided a good proxy for the amplitude measurements that are the basis for most (and best) magnitude estimation techniques.  These duration estimates are somewhat subjective based on an analyst determining when the seismic trace returns to near "background" levels of shaking.  All of our seismic analysts were trained to use the same way of making these measurements but still there is always subjectivity to the values.

When we changed to the AQMS system coda durations were determined automatically by the software.  While this technique is less subjective (to human interpretation) it turns out to be easily fooled by all sorts of things in the seismic data; such as unusually quiet traces, small noise glitches, calibration problems and strange local seismic responses particularly characteristic of stations located on volcanoes.  Over the course of the past couple of years many of us have been quite disappointed in the quality of the coda duration magnitudes (Md).  With many more well calibrated and broad-band instruments now available the more traditional method of using trace amplitude measurements to compute what is called "local magnitude" (Ml) can be more routinely done.  To use almost all of the seismic stations in the PNSN careful attention must be paid to station "response information" (ie its ground motion amplification at all frequencies) and local station site corrections must be determined.  This "site correction" is due to local geology under a seismic station that may amplify or attenuate the actual ground motion.  It can only be determined empirically by observing many earthquakes recorded at all stations and determining which stations (on average) have higher or lower ground motions.  Once these site corrections have been determined, then true automatic, fairly reliable magnitudes (Ml) can be now calculated.

Using a suite of about 1,000 earthquakes from both the legacy system (pre-2012) and the new AQMS system, multiple runs of the local-magnitude computation engine were done to iterate to find a set of site corrections that would give a consistent set of magnitudes.  Of these events good determinations could be made for 961 of the events. 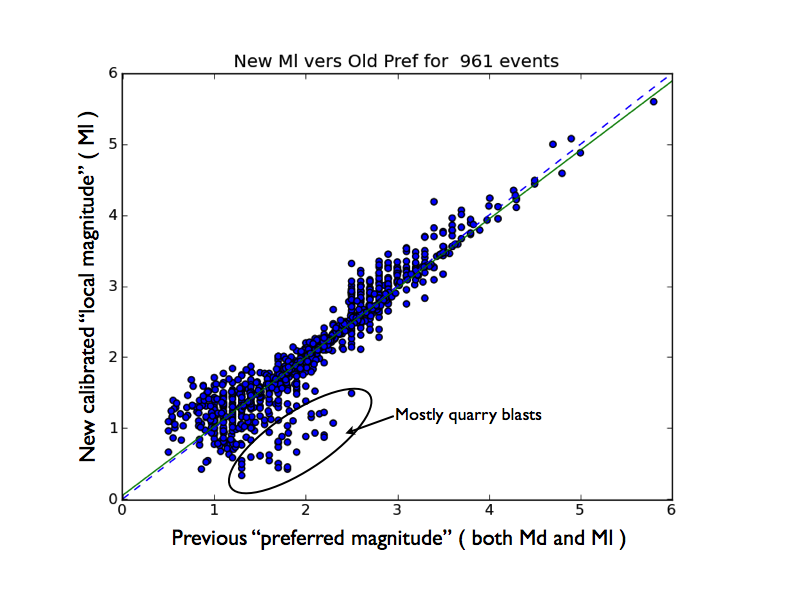 The above figure compares magnitudes computed with the new calibrated set of station corrections (vertical axis) with the previous "preferred" magnitude in the published catalog (horizontal axis). The preferred magnitude was sometimes a "local magnitude" computed with a small subset of calibrated stations but more often was a "duration magnitde" computed either from our legacy system or the new automatic AQMS duration procedures.  The dotted black line is the one to one line where both magnitudes would be exactly the same.  The green solid line is the least squares best fit to the data.  Note that they are almost the same indicating that there is little average bias in our new technique versus the old ones.  Most of the points in the circle are for quarry blasts, which are known to have extra long duration for their real size due to their very shallow depth.  Thus the duration magnitudes were frequently greatly over-estimating the size of these events.

We have started using our new calibrated "Ml" magnitudes for all local earthquakes and quarry blasts beginning on Sep 1, 2015.  Over the next few months we will be working backward to re-determine magnitudes for older events.  Of the several hundred thousand earthquakes in our catalog (since 1969) we will probably only be able to go back 10 or 20 years with this techniques since it requires a number of well calibrated and broad-band stations to work over a wide range of magnitudes.  Such stations only became available in the mid-1990s.

In any case earthquake magnitudes reported in our online catalog will be changing.  We are confident that these new magnitude estimates will be more accurate.