Mystery offshore earthquake and a reprise an hour later in 1992

Mystery offshore earthquake and a reprise an hour later in 1992

At the PNSN, we're switching software this year, which makes it a good time to improve the earthquake catalog.  I spent today pulling weeds from the list of earthquakes offshore Oregon and Washington.

Here is a minor mystery, the only near-shore events between 1980 and now that are puzzling.

There are a pair of M2.4 and M2.5 events that are 90 minutes apart and nearly identical, and odd in other ways as well!  They struck in the late afternoon, on September 2nd 1992, 20 km offshore (see map).  All the surrounding events from all the years of the catalog looked much more normal (higher in frequency content, with clear S waves). 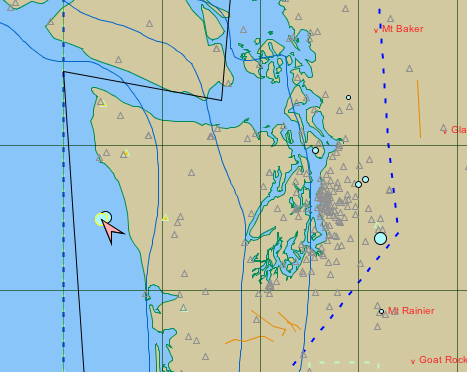 These are the two closest stations, OOW and OSR, the little tick marks are one second apart.   The P waves are unusually long-period,  and the seismograms show no S waves, and so I suspect non-earthquake origins (but 20km offshore?).  To be precise, they struck at at  23:13 and 00:44 UTC, on 9/2 and 9/3.

Here's a closer look in the 3rd figure, click on it to zoom in, the seismograms are VERY similar.  Even the second or two BEFORE the clear arrival looks somewhat similar, maybe the start of the signal at this station is emergent, although it starts abruptly on adjacent stations.  They start to differ 30-40s back, toward the end of the plot.  Maybe that could be used to estimate the distance between the two sources.

Here are all the stations for the second event (click to zoom) to illustrate the quality of the data.  Not great, but enough to locate it and see that the S waves are negligible, at best.

Any ideas?  Explosions at sea?  Undersea sliding?  They could just be two earthquakes that happen to be very similar, but then why so long period and without S waves?

It's the day of a famous M7 slow Nicaraguan earthquake that caused a tsunami, but that's probably irrelevant.