Back in December tremor picked up in central Oregon around the 5th of the month. Since 12/27/17 tremor events have decreased in the Portland and Medford area and appeared to die out by January 7th.

Below is the total tremor profile for Oregon with dark blue signifying the earliest tremor events and dark red the latest.  Tremor lasted for 33 days, about a week shy of the previous tremor which began in January of 2016 and continued until March of that year. 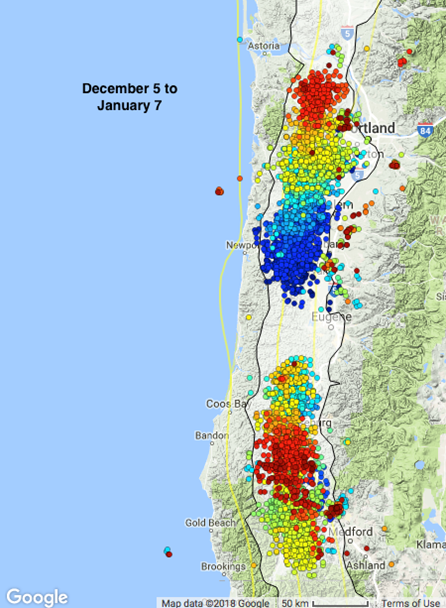 The wech-o-meter shows that tremor for central Oregon showed a strong trend right at the beginning and peaked around December 10th before halting on the 27th. Southern Oregon peaked in the days leading up to the 24th and resurged around the 1st before it stopped at the 7th.  Northern Oregon, had some variability throughout the run peaking early, again around the 24th and just after the first of the year.

Comparison to the Previous ETS

There were some similarities and differences between the 2016 and 2018 Oregon event.  Both events stayed along strike and followed the previous tremor paths.   Both were over a month long, and both were about 22 months apart.  Interesting differences were that this year’s ETS started in central Oregon and then split into opposite directions.  The density of plots for this year was concentrated more in southern Oregon.  In 2016 density was noted mostly west of Portland and Salem.


We’ve noticed a gap that occurred south of Eugene during the 2018 ETS event and one also to the north of Roseburg in 2016.  The last time that area was filled in was in June of 2015.  Here we see a gap northwest of Medford.  It will be interesting to see if this gap continues to show up during the next Oregon ETS.

Could southern Washington be experiencing another ETS event or is this just the continuation of Oregon? 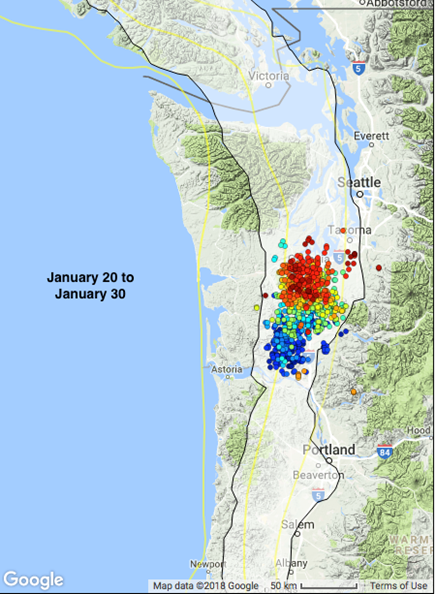 We’ll be keeping an eye on this one and do some more deep diving next time!

Here are some previous blogs to that highlight past ETS events in Oregon and Cascadia: