Next ETS Expected any time now

Next ETS Expected any time now

The next 14-month Magnitude 6+ slow earthquake (Episodic Tremor and Slip) event is expected after a quiet period in Cascadia... or has it been that quiet..  (skip to: Winter 2017 ETS page because it was going again but over as of Apr 6)

Tremor throughout Cascadia seems to have been relatively quiet over the past four months; only 5,600 tremor locations from the wech-o-meter compared to an average of 15,300 for the six previous four month periods.  In fact the whole past year seems quieter than previous years.  Here is a table of number of tremor locations for the past seven years (Jan 15 - Jan 15).

Because this seemed so unusual we wanted to make sure it was not due to a problem with the wech-o-meter or some trace data problem and so started looking at the details of when things changed and why. Ken Creager made some interesting plot comparisons that showed which seismic stations participated in generating tremor over the past few years and also what stations have been dead for various reasons.  Here is an example of a plot showing the tremor detections at each station in the Northern California sub-group (NC) by month (blue is Jan., yellow is Dec.) for the past three years. 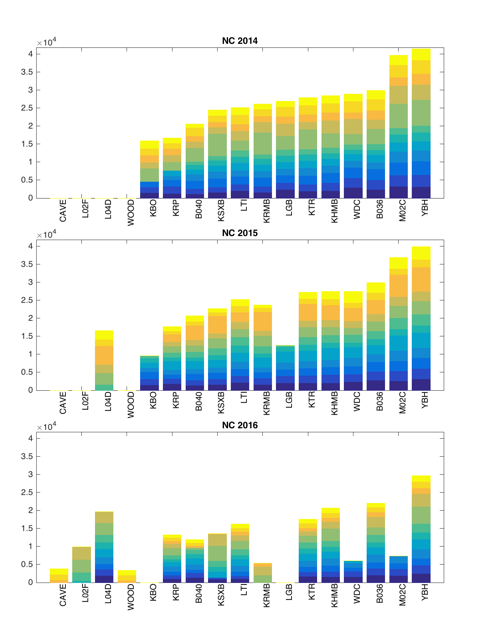 It is difficult to interpret this in detail without knowing more about station histories.  But it is obvious that more stations participated in more tremor detections in 2014 than in 2016.  Some stations such as LGB stopped working midway through 2015 and others like M02C and WDC stopped working in the fall of 2016.  Others such as WOOD and CAVE started working some time after those others stopped working. 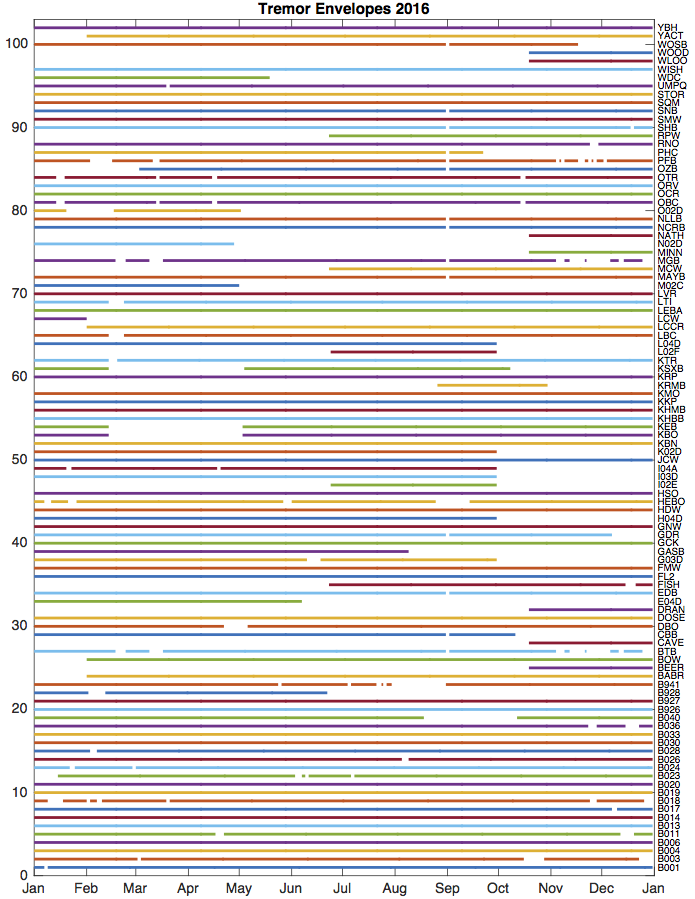 Here is a detailed summary of the changes in sensitivity by sub-region progressing from south to north we have gleaned from these and other plots:

CC - Because of the loss of four important stations in May 2016 it seems that this subnet’s sensitivity was greatly reduced from then on.  The addition of new stations on Jan 23, 2017 may restore that sensitivity but remains to be seen.

NC - The loss of the above mentioned stations had little effect here. This regions sensitivity was only very slightly degraded until end of Sep 2016 when the TA stations were removed.  The combination of this loss and another station in Oct has made this subnet quite insensitive until new stations were added on Jan 23.  It remains to be seen if this will restore the previous sensitivity.

SO - All was OK here until end of Sep when the TA stations were removed.  Even with their loss some tremor at the end of a northward moving ETS was located into Oct.  Some replacement UO stations for the lost TA ones came on line near the end of Oct and was fully restored by late Nov.  While this region has not had many locations since then we think its sensitivity has only been slightly decreased (other than the ~3 week period in early-mid Oct.

CO -  This is the same as SO.  Only degraded for ~3 weeks.  This region has traditionally had very few tremor locations other than during the big central Oregon ETS.

NO, SW, NW, BC - Do not have any obvious degradation.  While there is a station or two down from time to time, nothing systematic or significant enough to make much difference in sensitivity.

NV - On or about Nov 12 three key stations went down that likely has reduced sensitivity here.  They are still down and may be for a while yet.  However, we have asked the Canadians to send us some more/different stations in this area that may improve things a bit.  Tremor in central and nothern Vancouver Island is being detected from time to time despite missing these stations.

On Jan 23 we updated the configuration of the wech-o-meter to make sure it is running as well as it can.  In particular the southern three subgroups have had new stations added so we may again see an average amount of tremor in the far south start showing up again.  Unfortunately there are no additional stations in the far north and so we must wait for repairs or some new stations on northern Vancouver Island before the system will be fully sensitive in that region.

With the next main ETS likely to occur within the next month or two we are again starting up a blog to track this event.  Though we don't expect anything much different than previous ones.  Check it out at ETS Event of Winter 2017.