The following “blog” entry was written by Nicholas Park, a student intern from BASIS Chandler High School in Chandler, AZ who has spent the past month at the PNSN helping us with a variety of tasks and learning about earthquake and volcano hazards.  I encouraged him to summarize his understanding of Earthquake Early warning (EEW) and the National Volcano Early Warning System (NVEWS).  The following is his “compare and contrast” of these two efforts with only light editing by myself.

Earthquakes and volcanic eruptions are some of nature’s scariest demonstrations of power. From the ground shaking like a block of Jell-O, causing bookshelves to topple and entire buildings to crumble, to a volcano emitting a hot, raging torrent of debris, water, and rocks that wipes out everything in its path, it is hard to say whether experiencing a major earthquake or volcanic eruption is worse. Moreover, these terrifying events regularly occur in many parts of the world, including the portion of the Ring of Fire called the “West Coast of the US.” Doesn’t this mean large cities like Seattle, Portland, San Francisco, and Los Angeles are at high risk? Unfortunately, yes. Thus brings the burning question: how should one respond and ultimately stay safe given that a monster earthquake or volcanic eruption happens? Earthquakes and volcanic eruptions are two very different disaster types, each having its own set of hazards. For emphasis, one of the most pronounced differences between the two is that it is possible to get some forewarning when a volcano is about to erupt due to its conspicuous precursors but impossible to know when an earthquake will occur (earthquakes strike suddenly like a horror movie jumpscare). Luckily for the US, two proposed warning systems that would deal with earthquakes and volcanic eruptions are beginning to take form: Earthquake Early Warning (EEW, which currently has a prototype called ShakeAlert) and National Volcano Early Warning System (NVEWS). The main purpose of EEW and NVEWS is to notify people of a disaster’s characteristics and what to expect as fast as possible in order to ultimately minimize the number of human casualties, and economic losses. While EEW and NVEWS share other fundamental similarities such as a centralized structure, they chiefly differ in the time to react to a disaster’s onslaught and methods of keeping people and infrastructure as safe as possible.

The US Geological Survey (USGS) has been the main organization to advocate for the establishment of both EEW and NVEWS.

EEW and NVEWS address the issues of effectively ensuring the safety of people and the mitigation of economic damage in the event of an earthquake or volcanic eruption (respectively).

EEW and NVEWS hope to allow everyone in affected regions (including the general public, power infrastructure workers, emergency responders, business owners, and medical service staff) time to take safety measures to prepare for an upcoming disaster.

EEW and NVEWS incorporate elements of centralization to maintain organization and the proper release of information, such as a processing station for EEW and a 24-hour open national “watch” office for NVEWS.

Both warning systems are predicted to come in handy when geological disasters strike. Major scenarios include a possible magnitude 9 earthquake in the Cascadia Subduction Zone for EEW and the eruption of Mt. Rainier for NVEWS. 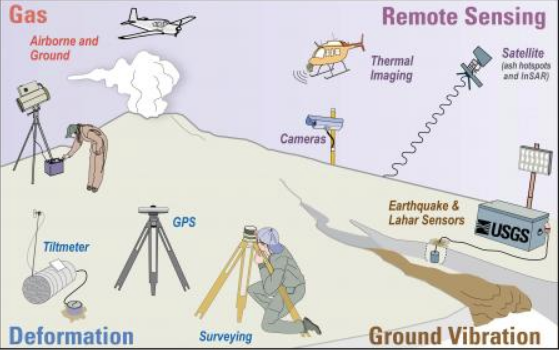 Thanks to the USGS, here is a picture depicting the various scientific techniques and technologies that would play major roles in monitoring volcanic activity (which are necessary for the successful implementation of NVEWS). 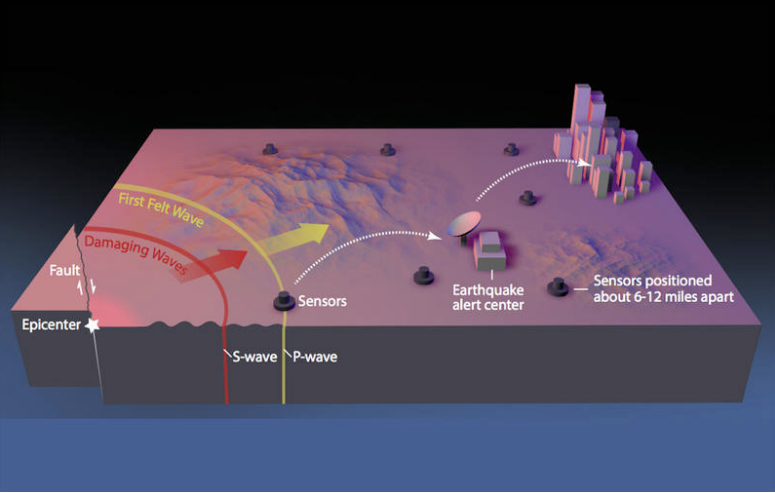 Here is a simple diagram of how EEW operates. When a P-wave is detected, the central processing station analyzes it and determines the location and size of the earthquake it originated from. The station then sends out a message alerting people who are farther from the earthquake how severe ground shaking will be. These help them prepare for the later arriving more damaging S-waves and surface-waves.

Due to the sudden nature of earthquakes without any precursory signs of unrest, EEW is only capable of giving warnings that range from a few seconds to minutes in advance. It is possible to know days and even months in advance of a volcanic eruption, so the NVEWS is capable of providing people with more time to respond.

EEW follows a strict, procedural technique in alerting the public of an earthquake. Based on the characteristics of an earthquake’s P-waves, a central processing station determines the magnitude and location of an earthquake as well as sends out an estimation of the level of ground shaking expected in neighboring places before the stronger and potentially more devastating S-waves arrive. On the other hand, NVEWS follows a more general safety protocol, including requiring people to have knowledge of the danger levels of 169 volcanoes in the US and how to react to the hazards (such as lava, lahars, and ash) that each of these volcanoes pose. NVEWS bases its claims primarily off of scientific technologies that are responsible for monitoring the behavior of a volcano, such as satellite imagery, GPS, and gas release inspections (see Image 1 for more details).

The idea of an EEW system officially came into place during the 1990s, with Mexico being one of the first countries to employ such techniques (especially after the catastrophic 1985 Mexico City Earthquake). The idea of NVEWS officially came into place in 2005, with a bill that authorizes $55 million in funding to implement the National Volcano Early Warning and Monitoring System Act being passed by the Senate in 2018.

Locations of most usefulness:

While EEW’s implimentation is currently limited to the three contiguous US states that border the Pacific Ocean (currently known as ShakeAlert there), NVEWS would be applied to volcanoes in the west coast states and also in Hawaii, Alaska, and Wyoming due to their notable volcanic threats (to name a few, Kilauea, Redoubt, and Yellowstone respectively). 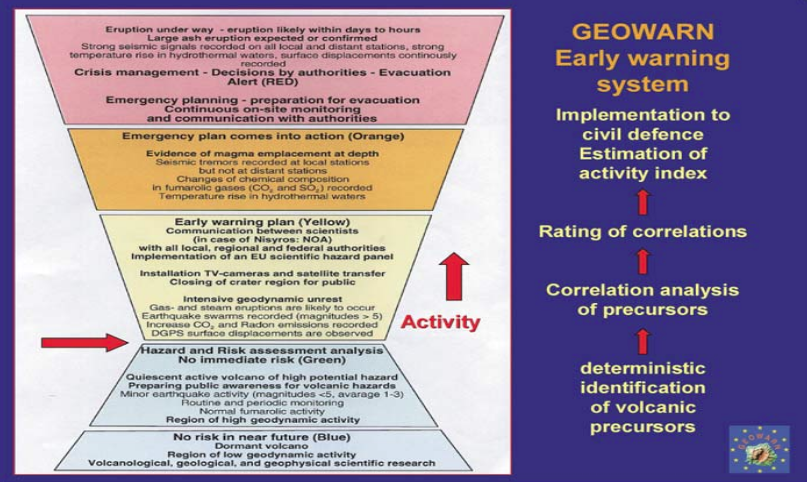 Here is an example of the color code that NVEWS would implement regarding the danger level of a volcano. The colors range from no future risk (blue) to eruption under way (red). Different actions are required depending on the risk level.

In summary, the idea of warning people that an earthquake’s destructive waves are approaching or that a volcano near their town will erupt is not new. However, efforts to create complex, orderly, and robust warning systems to more efficiently execute earthquake and volcano-related safety actions are taking shape. Early warnings have already been issued for the 1991 eruption of Mt. Pinatubo, the 2011 Tohoku Earthquake and the 2014 South Napa Earthquake. These and other cases of warnings have illuminated a hopeful path toward bolstering the well-being of society. For the US, there are plans to implement EEW and NVEWS soon, which will process crucial information regarding the nature of a disaster and immediately alert the general public and emergency responders. Whether it is warnings of only seconds or of weeks, EEW and NVEWS highlight how science has greatly advanced throughout the past decades and will continue to do so, giving us an ever-changing understanding of how to co-exist with the ultimate boss of the planet: old Mother Nature.