Don't Sweat the Little Ones

Don't Sweat the Little Ones

Recently, there have been more earthquakes than usual in the Puget Sound region (see map below), including a magnitude 3.0 in Stanwood, WA on November 30. Does this increase in size and frequency of earthquakes mean that the “big one” is coming soon?  In a report on KUOW last week, Washington’s state seismologist, John Vidale, said that these earthquakes are a coincidence and not part of a larger trend. 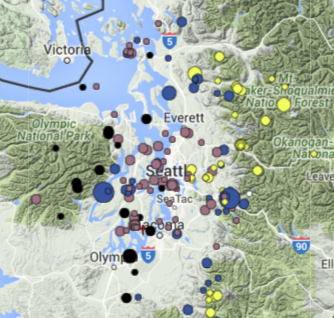 Earthquakes in the Puget Sound region between September 1 and December 11, 2015.  The size of the dots indicates the earthquake magnitude (the biggest are magnitude 4.0) and color represents earthquake depth (yellow is shallow, black is deep).

Earthquakes of magnitude 3.0 or less happen all the time. They are not damaging or even noticeable unless you are directly above the earthquake source.  Shaking from a magnitude 3.0 earthquake would feel similar to the vibrations produced by a heavy semi-truck rattling by. In most cases, little earthquakes are nothing to worry about.

When should you worry about little earthquakes? Changes in the number, magnitude and characteristics of little earthquakes near a volcano could indicate that magma is moving through the crust and consequently that there could be an impending volcanic eruption.  The figure below1 shows earthquake activity beneath the summit of Redoubt Volcano, Alaska between 1989 and 2010.  There are significantly more earthquakes around the times of the 1989-1990 and 2009 eruptions. 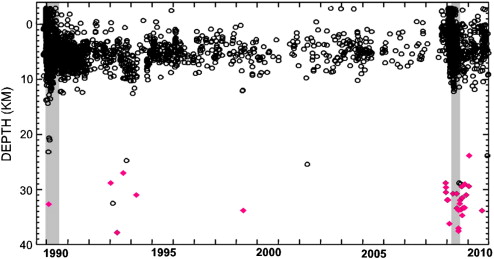 Time vs. depth plot of earthquakes (black dots) recorded below the summit of Redoubt Volcano, Alaska. There are many more earthquakes during eruptions (grey bars).

Changes in seismicity before large earthquakes is less obvious and not distinct enough to predict earthquakes. In fact, when there is a foreshock, we usually do not know it is a foreshock until a bigger earthquake occurs after it. In addition, precursor earthquakes tend to happen in the vicinity of the main shock, which in the case of the Cascadia “big one” would be off the Washington coast and not in the Puget Sound area.

One month prior to the magnitude 9.0 Tohoku earthquake on March 11, 2011, seismic activity, including a magnitude 5.5 event, started in an area ~50 km to the northeast of the main shock.2 While in retrospect we can say that these earthquakes were foreshocks, at the time they occurred scientists could not tell that they were leading up to Japan’s “big one.”

Is the magnitude 9.0 going to happen in the next month?  Probably not.  There is approximately a 1 in 100,000 chance that the “big one” will happen each day (or about a 1 in 300 chance it will happen each year).  This extra earthquake activity does not change that.  So, don’t sweat about these little earthquakes. Vidale says, “We’re watching the map a little more closely than usual, but that’s about all this burst of activity deserves.”  In other words, they are probably nothing to worry about.