Saved version of the Hawk-O-Grams (seismograms) are available.

This blogger was out of town in the wild mountains of eastern British Columbia during the game. However, he was able to find a bar with WiFi and TV showing the game and thus was able to "study" all the shaking going on. One thing discovered was that Canadian TV seems to have only about a 5 second delay while US TV has about a 10 second delay. Go figure. Also, the "Quick Shake" application worked like a charm even way out here in moose-land. There were no glitches.  It was designed to handle both old style browsers (using the "socket.io" library) and modern browsers (using the "ws" library) which 94% of our users have. The PNSN web site got lots of action but less than half has many hits as for the last game, probably because the novelty has worn off for many.  In both cases 2/3 of the hits were from new users so the word was still spreading.

However, more importantly we now have the proverbial nail in the coffin as proof for the source of the seismic signals we have been calling "Dance Quakes." Not only that but the "Dance Quake" following the go-ahead touchdown and 2-point conversion seems to be the biggest seismic signal yet seen associated with a Seahawks game (Wrong! See Note Below). Those of us watching on TV directly saw the source of the shaking. For some reason the TV broadcast did not break away for a commercial as is typical after touchdowns.  Instead it showed several different scenes of the crowd. It was very obvious that large number of fans were jumping up and down in unison at a rate of about 2 1/2  jumps per second. Our staff in the press box said that the whole place was shaking so much they thought it might be a real earthquake. 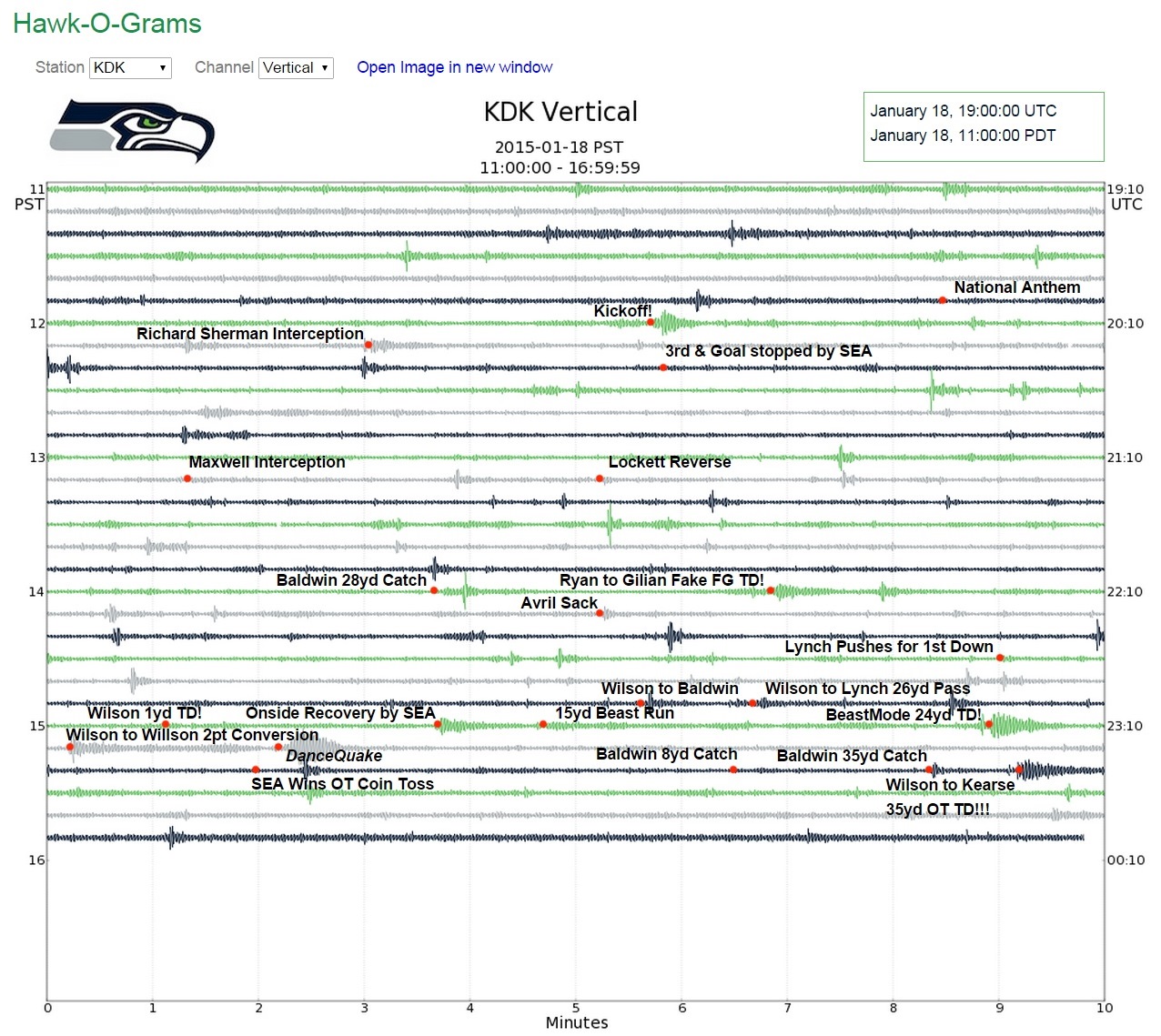 Here is an annotated version of the KDK Hawk-O-Gram record for this game (click on it for a larger version). All of the Hawk-O-Grams are available also. The text annotations are for the red dot that is placed just before the seismic signal being described. Note that some of the largest signals are near the end of the game. There are many small signals without annotations, many of which are probably trucks starting up the ramp to the Alaskan Way Viaduct, which is very close to this station. One of the largest signals is the one two minutes after a small signal labeled "Wilson to Wilson 2pt Conversion" (on the gray line and labeled "Dance Quake". 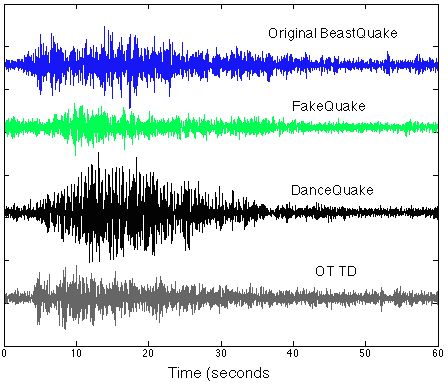 Again our Seahawk fan/student, Kelley Hall has produced a comparison of the original "Beast Quake" (blue) with some of the large signals from this game. The "Fake Quake" (green) was due to the crowd's reaction to the fake field goal and TD pass and the "OT TD" (gray) was the reaction due to the winning touchdown in overtime. The biggest signal of all was the "Dance Quake" about two minutes after the go-ahead touchdown and 2-pt conversion. At this time the crowd was pumped up and really jumping in unison while waiting on the following kick-off.

After a night's rest and some help from others, here is a bit more analysis for you seismo-football geeks out there. It seems that there were two periods of "Dance Quake" after the go-ahead TD and 2-pt conversion with only the second one large enough to claim seismic supremacy. 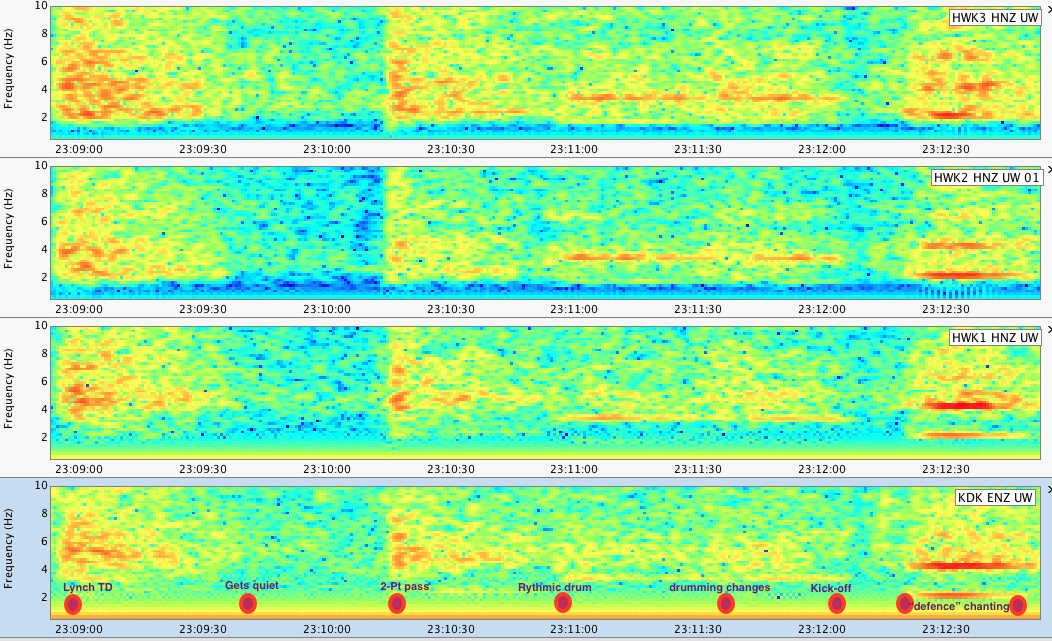 Here is a spectrogram similar to one shown in the blog for last week's game. (Time axis is in UTC which is PST-8).  It starts just before the go-ahead touchdown at 3:09 pm PST and ends just as the big "Dance Quake" quiets down four minutes later. Note that at about 3:10:15 the burst of energy is for the Wilson-to-Wilson 2-pt conversion. This is followed by a comparatively mild "Dance Quake" from 3:11pm to just after 3:12pm. Then there is a short pause before the mother of all "Dance Quakes" begins. Note that these appear to be at different frequencies.

ATTENTION New Information as of Jan 21: Our staff at the game have loaded some video clips they took from the press box of critical parts that illustrate the different crowd reactions. By getting approximate times (within 10-15 sec) of when things start or stop I have been able to identify pretty much exactly what generates what sort of seismic signal. The spectrogram above has been annotated with my observations from the video clip. The major discovery here is that while most "Dance Quakes" are indeed associated with fans dancing to music (drumming in the period between 2-pt conversion and kick-off) the "mother of all "Dance Quakes" is really a defense "Chant Quake", fans jumping and chanting what sounds like "De-fence-now". While the earlier "Dance Quakes" have a beat of more than 2.5/sec the "Chant Quake" has a beat of about 2.1/sec. These differences match the frequency differences as illustrated below. Therefore, ergo, ipso facto, quod erat demonstradum, QED it seems that, at least in this case,  fans' enthusiasm for defense is even bigger than for beast-mode. Sorry Marshawn, the numbers don't lie.

I include short clips from the video I used to confirm the differences between "Beast Quakes" and "Dance Quakes". For the latter the sound track is quite important as one can barely here the chant that sounds like, "de-fense now" over and over again getting louder and then finally dying out.

Above is a 20 second clip of the go-ahead touchdown near the end of regulation time. Note the fans randomly jump and cheer as they see the play develope. Ignore the local talking near the camera and focus on the background cheering.

Here is a 40 second clip following the Seahawk kickoff and going until just before the first Packer play from Scrimmage. Note while the teams are doing their substituting the fans start chanting. Its hard to hear at first but gets louder part way through. While hard to see there are places where one can see whole sections of people all jumping in time to the chant. It is the fact that the crowd is in unison that makes for the stronger seismic signal for this "Dance Quake" than when the crowd randomly jumps. 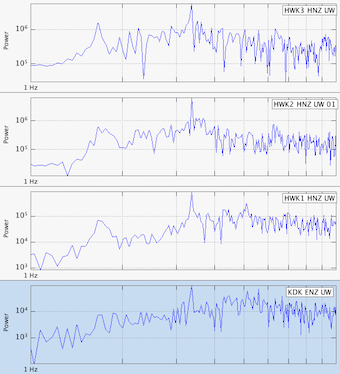 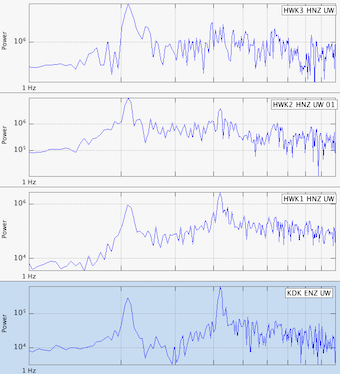 Here are two FFT plots of all four stations for the two different "Dance Quakes". Note that the first one has a strong peak at a frequency of 3.37 Hz and a weaker one at about half that, 1.67 Hz.

The second and larger (largest ever) "Dance Quake" has a very strong peak at 2.1 Hz and a peak at 4.2 Hz that is even stronger on the two ground level stations (HWK1, KDK). Why there is this doubling of frequency is still not understood. The two upper deck stations (HWK2, HWK3) have more complicated higher frequency content just over 6 Hz. Clearly while most fans were jumping up and down in unison there were many who were either not very coordinated or JUI (Jumping Under the Influence). We have checked out the music being played at these two different times and see that the of rhythms drive what sort of jumping/dancing. See note above. 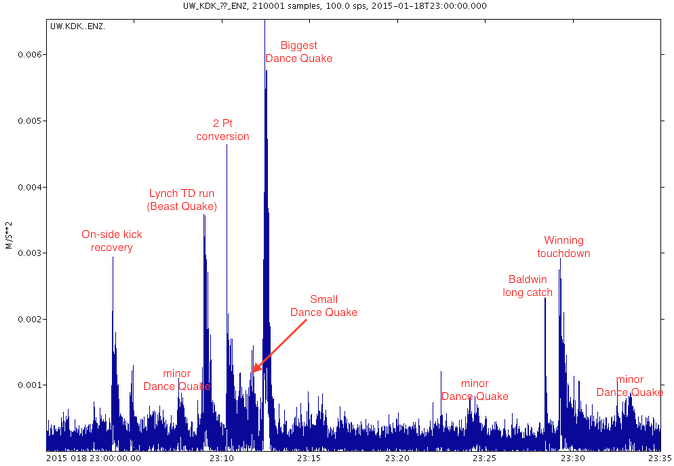 And finally, one more analysis plot of the final 35 minutes, including overtime. Paul Bodin, the PNSN manager (and Seahawk fan), used plotting facilities at the Incorporated Research Institutions for Seismology (IRIS) to produce an envelope function for 35 minutes starting at 3pm. This envelope plot can be considered the average energy taking place in the 1-10Hz frequency band on station KDK. Most peaks are labeled based on critical Seahawk plays. The three marked "minor Dance Quake" are interpreted as such from the frequency content.

I think we pretty much have this all figured out. Indeed football fans generate recognizable seismic signals depending on what's going on. Seahawk fans do get coordinated and move together with appropriate music on the stadium sound system. The only thing left for an experiment in the future is to determine if Seattle Sounder fans can generate as much or maybe more shaking with their frequent coordinated jumping in support of the game actually played with the foot.

To round out this blog with a bit more geeky stuff, our staff Angel Ling has compiled lots of information about our social media activity. This is one area where it seems people keep their interest up.

The total impressions on Twitter for the last 2 weeks is 1.2M! Thank you for everyone's support to make this a great success.

What a way to finish the Seahawk season in Seattle! Too bad we will not be seismically monitoring the Super Bowl 49. It's time for us to go back to our day jobs monitoring PNW earthquakes and earthquakes, and building an earthquake early warning system.