Seeing Through Rocks: Seismic Imaging of the Cascadia Subduction Zone

Seeing Through Rocks: Seismic Imaging of the Cascadia Subduction Zone 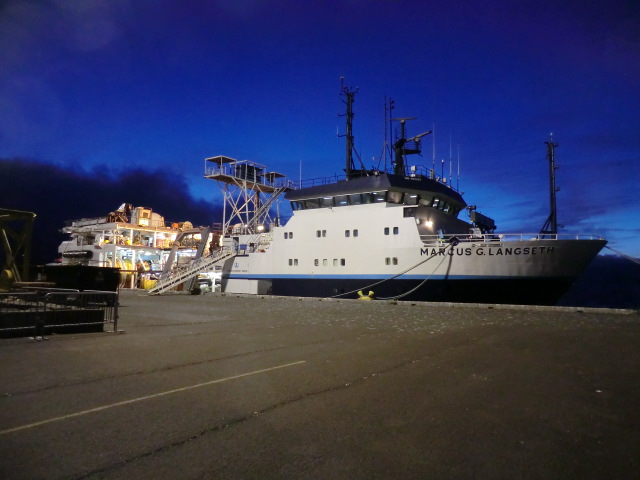 I recently returned from two weeks at sea aboard the research vessel, the R/V Marcus G. Langseth, where I was fortunate to be a part of the Cascadia Open Access Seismic Transects research cruise. The scientific objective of the cruise was to obtain high quality seismic images of the Cascadia subduction zone: the interface between the downgoing Juan de Fuca plate and the overriding North American plate that can generate the magnitude ~9 megathrust earthquakes that we’re always talking about.

The technology we used, called “reflection seismology,” is the sort of technology that oil companies use to search for oil reservoirs. Basically, we send seismic waves into the earth and the waves bounce off the contrasts between different rocks in the subsurface. We record these reflections with seismometers and turn them into an image, allowing us to see into the earth and study the subsurface. This can be done on land or at sea.

Here’s how we did it at sea: first we unrolled a 5-mile long “streamer” off the largest spools known to mankind and strung it out straight behind the ship. The streamer looks like a fire hose but is actually a string of seismometers spaced every couple of feet. We attached an orange “bird” to the streamer every so often that keeps the streamer at a constant depth below the water. The bird tips its wings if it gets too deep or too shallow and "flies" back to the correct depth. You can see a picture of Jackie carrying a bird over to be deployed and a bird going out on the streamer behind the boat below: 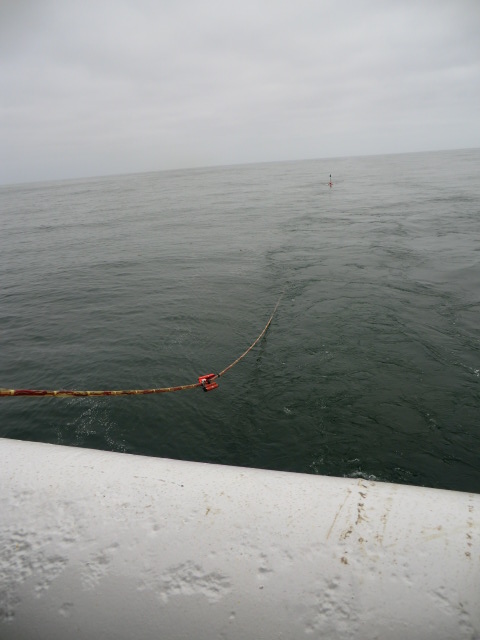 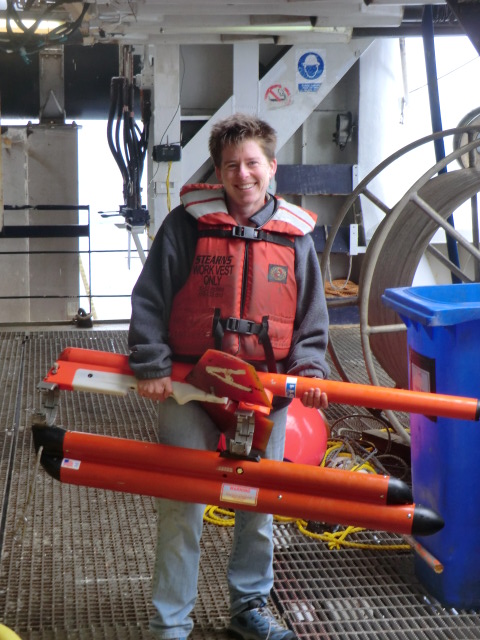 Next we deployed our seismic source, the “airguns." Each of the 36 “guns” holds 2000 psi of compressed air. To “fire,” it simply releases that air into the water. The bubble of air collapses instantly under the pressure of the water and makes a loud boom when it does. That boom generates seismic waves that propagate down through the water and into the earth, bounce off rock layers, folds, and faults, and make their way back to the streamer where we record it. Then we process this data and turn it into images. We monitored the acquisition of this data along with other data we were collecting such as detailed topography of the ocean floor and magnetic and gravity variations, from a wall of monitors that defeated our monitor set up at the PNSN hands down. 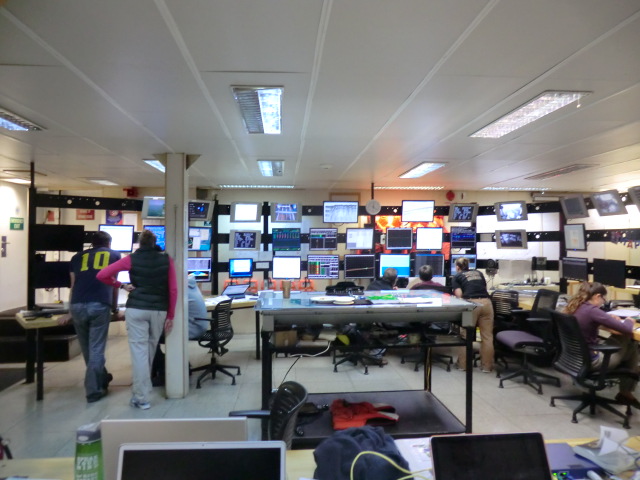 The boat moves along in a straight line at about 5 mph dragging all this equipment behind it. We set off the guns every 20 seconds and recorded the seismic signal on several hundred seismometers in the streamer each time. We were at sea for about two weeks and we were collecting data in this way 24 hours a day for most of it. So as you can imagine, we collected an awful lot of data. And we spent an awful lot of time in front of computer screens processing this data to turn it into images. But as a result, we have an awful lot of cool images to show for it. A secondary objective of the cruise was to train young scientists, such as myself, how to do marine seismic imaging, so they let us newbies do the processing. Despite our inexperience, we were able to produce some stunning preliminary images of the subduction zone, but before I show some of them, here is a map showing the seismic lines that we shot overlain on the topography of the sea floor. You can see the outline of Gray’s harbor and Long Beach Peninsula at right. to orient yourself. The black wiggly north-south-ish line at left indicates where the Juan de Fuca plate begins to subduct. The black lines show where we collected data to create 2D seismic images. 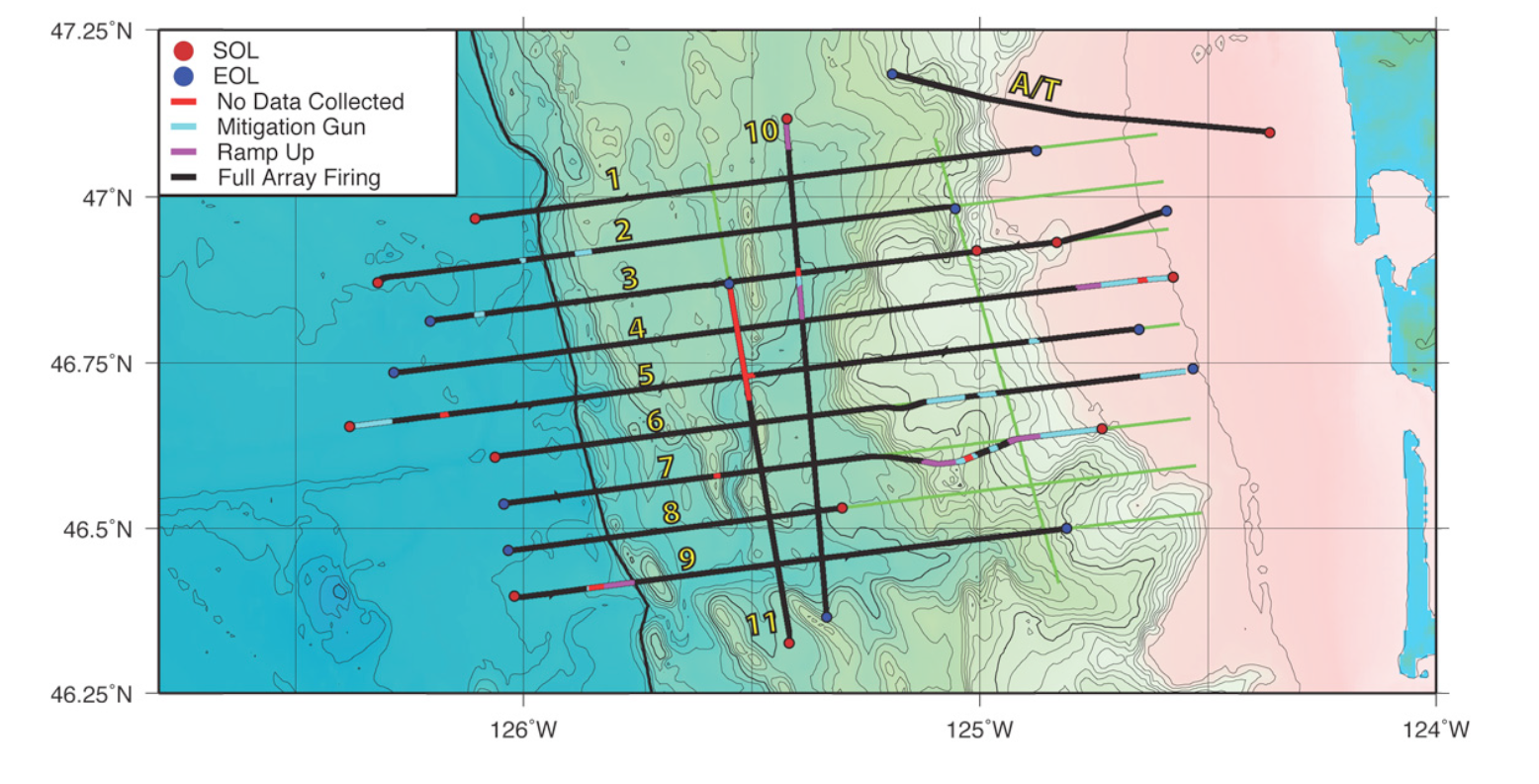 You may notice some sections of the seismic lines are colored on the map. These are holes in our data where we had to shut down the air guns. They are there because of whales and dolphins. No one seems to be sure if the sounds of the airguns is bad for marine mammals or not, in fact sometimes big pods of dolphins would come swim along with the airguns for a while and seals would play around them (and we shut them off of course, perhaps to their disappointment). But to protect these valuable species just in case, we had five Protected Species Observers on board. Their job was to sit up in a watch tower all day and watch for whales, dolphins and other species (a perfect job when the weather is nice) and to tell us to shut down the air guns when they spotted any of these animals within a certain calculated radius. It turns out that the Washington coast is teeming with humpback whales this time of year (we saw 20 or 30 at once one time) and right-whale dolphins that come in pods of several hundred. These swarms of little black dolphins jumped in and out of the waves in synchrony by the dozen. It was an incredible sight for me, having never seen dolphins in the wild before, but bittersweet because we were not able to collect data when they were around and as a result we have a lot of holes in our images. But I digress. Let's look at some images of our subduction zone!

First, here is a cartoon from Oregon State showing what is going on in the subduction zone. The Juan de Fuca plate, composed of dense oceanic crust and is covered in layers of sediment that has hardened into rock, is running into the North American plate. Where they collide, the denser Juan de Fuca plate dives under (“subducts”) and the locked interface between the two is the Cascadia fault  that breaks in magnitude 9-ish earthquakes every couple hundred years. The sediment on top of the Juan de Fuca plate is scraped off and folded and faulted in what is called the “accretionary wedge”, which is essentially a wrinkled up rug of rock. That is what we can see best in these preliminary images, but the deeper subducting plate should be more visible out once the experts work their processing magic.

Here is one of my favorite seismic lines, line 5 on the map above. Click on it to expand. I added some labels to help with the interpretation: 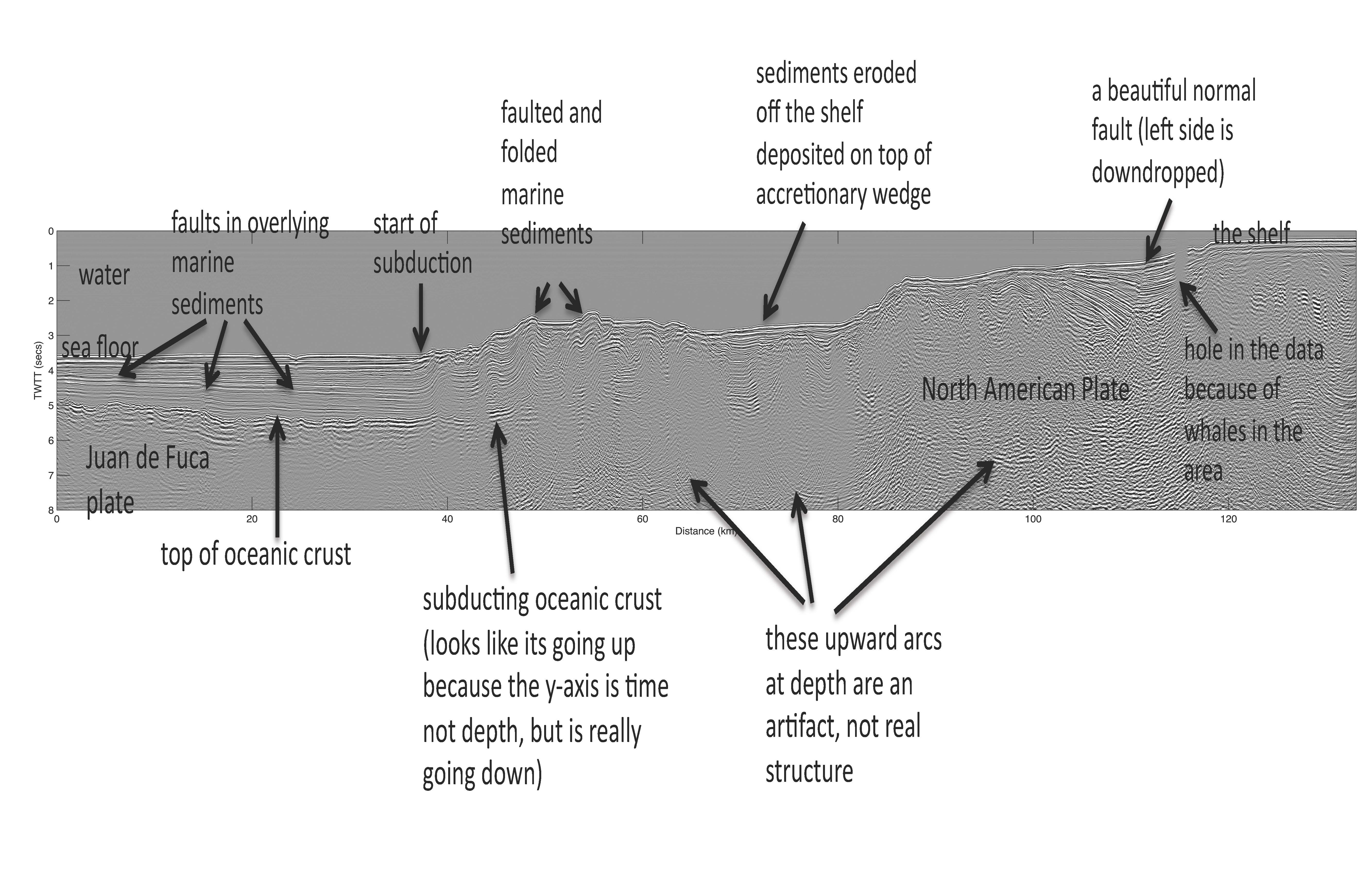 This is called a “time migration” plot. The y-axis shows how long it took for each wave reflection to go down from the surface, bounce off the reflector, and go back to the surface. Layers that transmit seismic wave more slowly, like the water column and less dense sedimentary rocks look thicker than they actually are and faster rocks like the dense oceanic crust look thinner than they are. This type of plot also makes it look like the oceanic crust is going up, when it is actually going down. It takes more sophisticated processing to turn this into a “depth migration” where the y-axis will actually show depth. That endeavor is currently underway in Wyoming.

It amazes me that the little thread of a streamer we sent off in the water, combined with some air bubbles, smarts, and processing artistry, allows us look so vividly several kilometers into the earth.

The greatest thing about this particular research cruise is that it was done under an “open access” model, meaning the data will be available to anyone who wants to look at it or do some science with it almost immediately. This is an experiment to see if this sort of model will allow science to progress faster by having more people working on the same data set sooner. Even you can use the data if you want (but brace yourself for scary data formats). Sometime in the next few weeks you will be able to find it on these two sites: http://www.marine-geo.org/portals/seismic/news.php and http://www.ig.utexas.edu/sdc/ You can also learn more details about what exactly we did and what life is like at sea (including details on our high-seas ping pong tournament) by reading the blog we kept while at sea or downloading the cruise report.

And with that I will leave you with another seismic line for you to ooh and ahh over. I left off the comments to challenge you to interpret it yourself.