Two large and damaging explosions recently took place in the central Puget Sound; one a propane tank explosion in a home in Port Orchard on Feb. 23 resulted in two fatalities.  The other was a natural gas explosion in the Greenwood distinct of Seattle on Mar. 9, 2016.  Both explosions were widely heard and also reported by some as feeling like an earthquake.  BUT, were they earthquakes?  Technically, no, they were not earthquakes but may be reported in earthquake catalogs.  Such explosions may shake the ground at the source like an earthquake but this is relatively small potatoes compared to what people report and what we record on our seismographs.

Explosions such as these generate a large pressure pulse in the atmosphere that propagates as an acoustic wave in the air rather than as a seismic wave in the ground.  Seismic waves travel at speeds from 5-6 km/sec (P-waves) to 2.5-3.5 km/sec for S-waves and Surface-waves.  Acoustic waves in the air travel at only 0.325 km/sec, over ten times slower and so it is very obvious when we see "arrivals" on seismograms that are traveling so slowly.  Here are the seismograms from some of the early arriving stations for the Mar 9 explosion.  The nearest instrument, QBOG is only a few 100 meters from the exploding buildings as reported in the press.  At a distance of 7.4 km (about 4 1/2 miles) station, NOWS has an arrival over 20 seconds later. In fact, not shown here but arrivals at distances out to almost 25 km can be seen on stations to the northeast. Direct seismic waves would arrive at this farthermost station within 10 seconds but nothing can be seen on any of these distant stations at these earlier times. 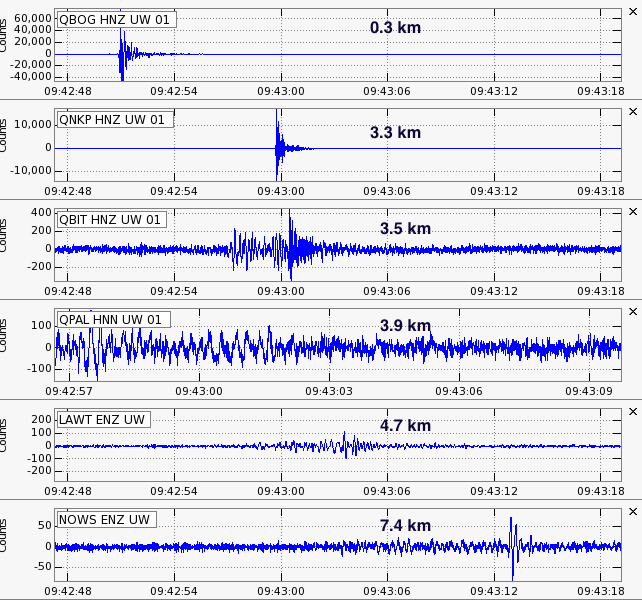 A similar set of seismograms (different stations) is seen below for the Feb 23 explosion.  In this case the nearest station was over 10 km away and good arrivals on seismic stations can be seen out to almost 20 km.  Again, not shown here but there are clear arrivals out to almost 30 km for this event. 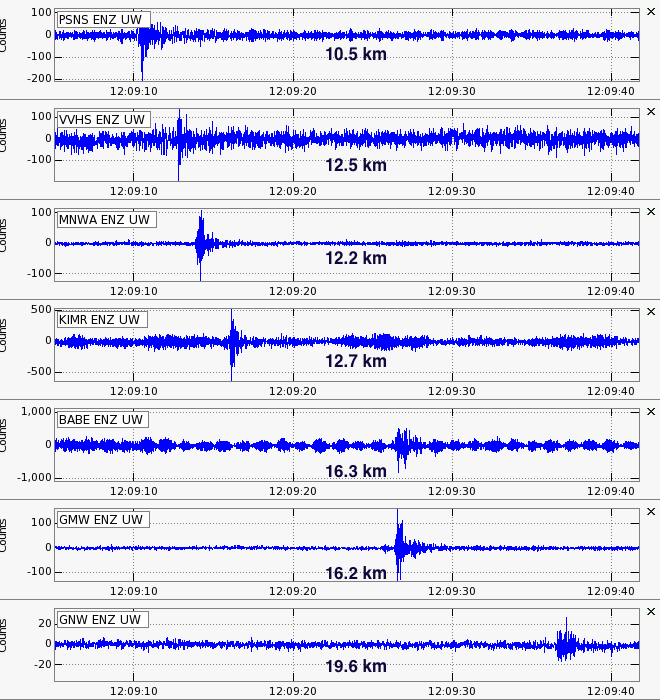 Since we know the speed of sound in air quite well then we can locate the source of the explosions using the arrival times of the acoustic airwave.  Timing these arrivals and using a standard earthquake location program but with the velocity set to 0.325 km/sec rather than that appropriate for seismic waves we can get fairly accurate locations for both of these explosions.  Below are the output listings for running each of these events. 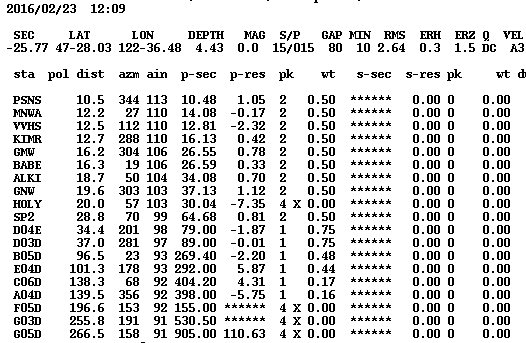 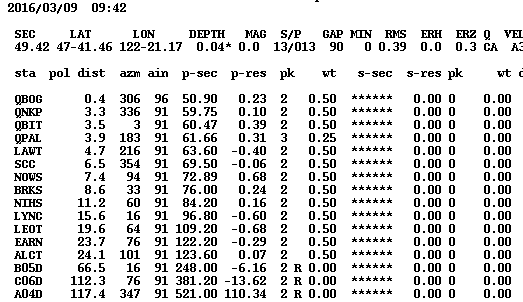 These listing may not be all that interesting and difficult to interpret the locations so below there are close up maps of the explosion source areas with our seismically determined location shown by the small orange pin-drop. The large red circle includes the area that the explosions, as reported in the news media, took place.  The distances between the center of the circle and our seismically determined location using the acoustic arrivals is about 100 meters.  Thus, even when the nearest station is almost 10 km away we can get pretty accurate locations for these events. 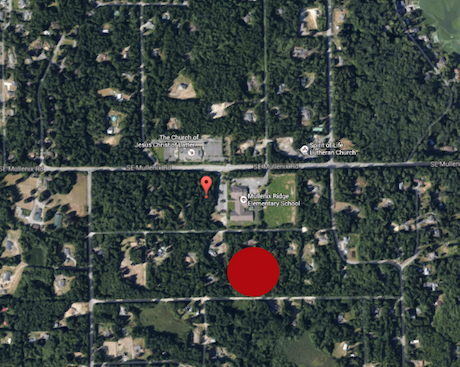 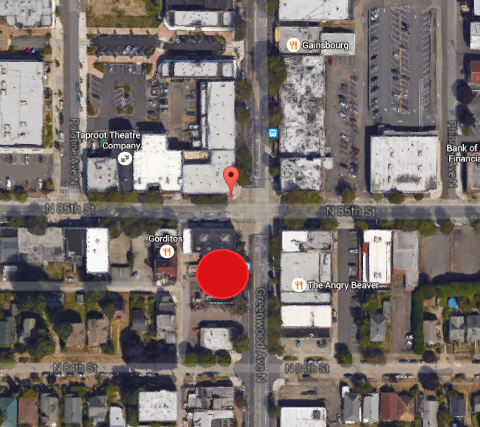 That is not the whole story.  We often wonder why acoustic airwaves record so well on seismographs that are made to detect ground motion not air motion.  A strong acoustic airwave certainly must shake the ground, but it also may cause our sensors themselves to respond through non-linear effects.  It's very difficult to take these two aspects apart.  The vertical component of seismic instruments may respond to air pressure changes because of buoyancy, and the horizontal components should have a much smaller response.  It would be really nice if we knew what the actual pressure changes were at or near one of our stations.  A query to Cliff Mass, a local atmospheric science guru about the availability of such data in Seattle turned up nothing.  It seems metrological instruments do not normally record at a high enough sample rate to see such rapid pressure fluctuations.  (See the Cliff Mass Weather Blog for some of the details.).

HOWEVER, EarthScope to the rescue.  It turns out that many of the Transportable Array stations of the EarthScope project include a high data-rate channel for a microbarograph.  These are co-located with seismic channels so we have an opportunity to do a direct comparison.  Plotted below are the three seismic channels and the pressure channel (component "EP.BDF") for station, D03D, located about 37 km south of the Feb. 23 blast. Note that the vertical channel (BHZ) and the pressure channel have many similar characteristics while the horizontal channels (top two) don't show this same effect.  This seems a confirmation that, at least for this type of seismic instrument the response is mostly due to the pressure changes and not due to ground shaking.  Of course different types of instruments may have a different response so this observation may not apply in all cases and there are ways, depending on local stuctures and the seismic vault for the pressure wave to generate actual local vertical ground motions. 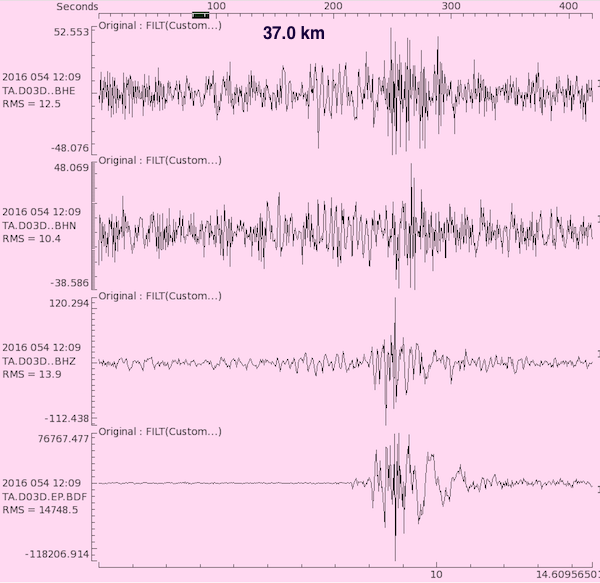 So, did the people reporting what they thought was an earthquake really feel the ground shaking? Probably not.  I suspect that they may have felt their house or building shaking.  The airwaves certainly would shake a large structure with air inside.  The differential pressures as the wave passed by could be quite large even at a distance.  Of course, near by this is what caused windows to blow out.  I would suspect that anyone out of doors would report hearing an explosion while people in doors might think it was an earthquake.

These pressure waves on microbarographs can be detected at much greater distances than when using seismographs.  After all, seismographs should not respond too much to pressure changes since we want them to accurately record ground motion.  So looking at the pressure sensors at more distant EarthScope stations for the Feb. 23 blast we can see arrivals all the way out to almost 140 km distant (Station A04D located up near Bellingham). 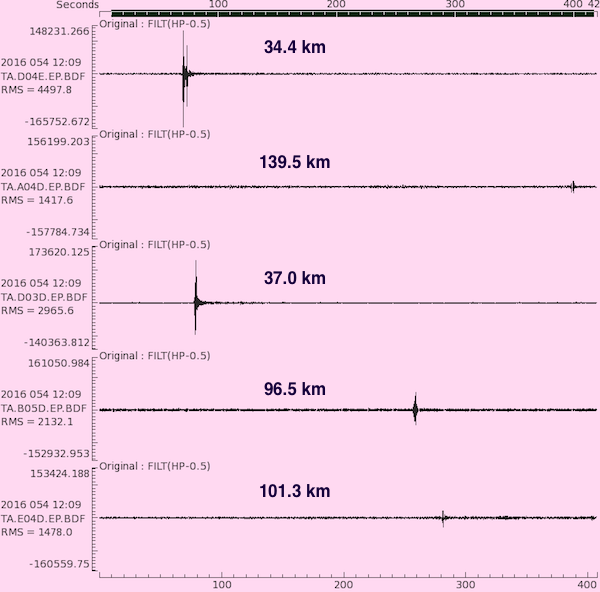 We are always asked about magnitude; I.E. "on the Richter Scale".  Asking about what the magnitude was of these explosions is an interesting question but really not appropriate.  Magnitude is a measure of an earthquake's size.  These explosions are not earthquakes.  They have a very different type of source and, as we have seen above, do not shake the ground in the same way as an earthquake.  Our seismic records record very little if any direct seismic shaking thus if we used those to calculate magnitude it would be VERY small; much less than magnitude 1.

However we can compare the relative sizes of these two events by how strong the the airwave was at different distances from each.  For a first guess it would seem that the Feb. 23 blast near Port Orchard is noticeably larger.  It records on more instruments over a larger area and seems stronger at the same distances.  Without some detailed quantitative work (beyond this retired guys interest) I can't say more.