Ground does not get hot before earthquakes

Ground does not get hot before earthquakes

Another recent article in GRL by Balckett and others examined the speculation that the ground heats up days before earthquakes, providing a way to predict them.  Last blog entry attacked the false idea that the Earth is expanding, this time I'll harass another unfounded and counterproductive idea.

Several decades, ago, it was reasonable to consider that a large area around a fault about to break might start to flex and creak, but that was before we knew that there is rarely widespread foreshocks or deformation seen before large earthquakes.  Now we know that most earthquakes do not begin with days or weeks of slow deformation, at least not enough to reveal itself to our very sensitive instruments.  The idea of disturbed ground giving away coming quakes lives on, however.

Here is the most cited example of an observation of ground heating up several days before an earthquake.  The earthquake is the M7.9 Bhuj event in 2001, which killed many people in India.  This figure is from Satellite thermal IR phenomena associated with some of the major earthquakes in 1999-2003, in Physics and Chemistry of the Earth, by Ouzounov and others, 2006. 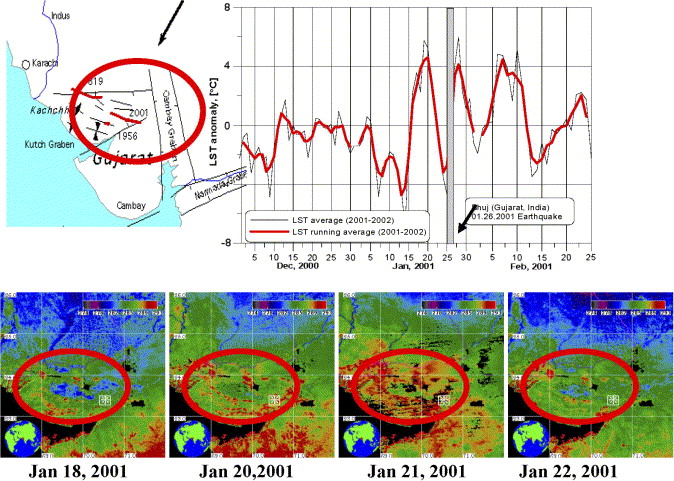 You can see that the area of the quake inside the red circle gets browner - the original claim was that the ground got several degrees warmer.  Later theories by the same authors modified the idea to hypothesize that the ground LOOKS hotter to satellites, but really something more exotic (Google p-holes and earthquake prediction for the inscrutable "new physics").

The Blackett paper linked in the beginning re-examines the surface temperture in this region to see what is happening in more detail.  The details are gruesome, but truth is clear.  The original paper compares 2001, the year with the earthquake, only to the following year 2002.  The more careful Blackett examination of the year of the earthquake with the surrounding SIX years shows that the temperature variation before the earthquake is not unusual.  The only observation that seems unusual arises because some areas that tend to be anomalously warm are covered by clouds after the earthquake, which can be misinterpreted as the ground cooling.

Unfortunately, the idea that the ground heats up before earthquakes still appears in the press several times a year.  The prospect of easy-as-pie earthquake prediction by watching for toasty ground makes the public impatient with the less effective and more difficult ways earthquake hazard is actually being reduced - by careful geological studies of where and when ancient earthquake struck, complex simulations of the pattern of strong shaking in future earthquakes, and trying to tease out the intricate way current deformation and shaking will set off future events.