Mine blast masquerades as volcanic tremor

Mine blast masquerades as volcanic tremor 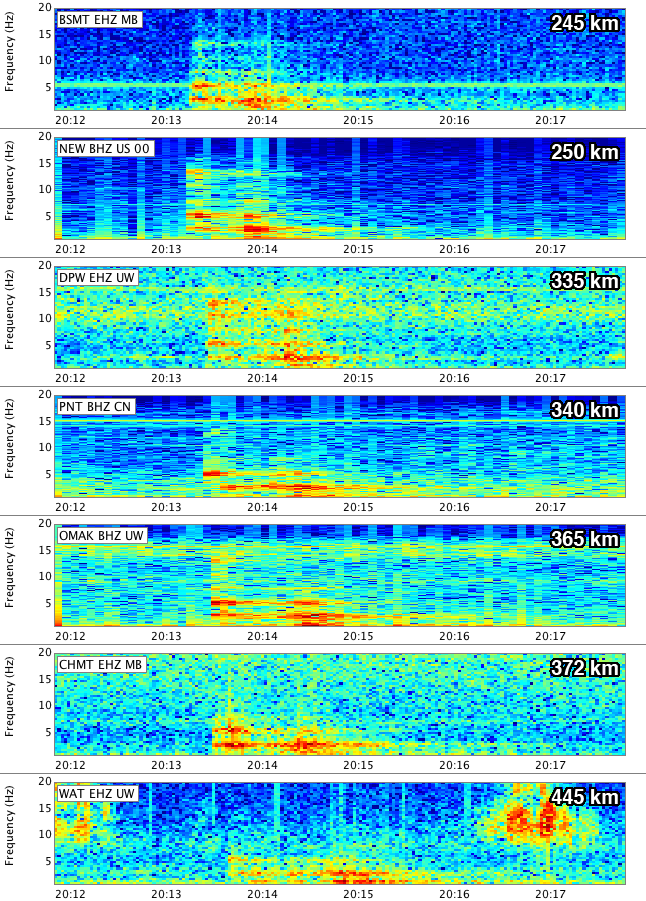 As part of our routine volcano monitoring, we look at spectrograms of the stations on all the volcanoes to find tremor or small swarms our automatic system might miss. Around noon on February 9th, a strange harmonic signal showed up on multiple volcanoes. John asked me to look into it further, since harmonic tremor is kind of my thing.

Originally, it looked like it was only showing up on a handful of short-period stations, and could be some sort of weird telemetry or electronic noise. Sometimes we get noise that looks harmonic like this, so maybe our stations were acting up and needed fixing? Last week, John blogged about some other harmonic signals local to Mount St. Helens, but it was just so weird that this was showing up on just about all the volcanoes: Baker, Glacier, Rainier, Mount St. Helens, and Hood! I started rooting around in the data and found the signal all across our network, including a few broadband stations.

On the above left are several spectrograms from across the network that I have quick access to (click here to see more). I sorted the stations by distance and noticed that there was a distinct and systematic lag in time between when it would first show up (anywhere from 1 to 25 seconds), and that it was both earlier, stronger, and with more overtones the further north and east I looked. The signal seemed to be real, and terrestrial at that. The waves appeared to be moving at P-wave speed as opposed to air-wave speed, and I could also see something resembling an S-wave several seconds later... so I took a stab at trying to locate it. The distances on the spectrograms reflect the distance from my assumed source location.

Turns out the signal most likely originated in southeastern British Columbia, somewhere near Elkford. I Googled the area, and there are several sizable coal mines nearby. One of the techniques used to efficiently extract material from mines is something called ripple-fire blasting. Charges are set off with short but consistent time delays, usually around a tenth of a second apart. These small delays create the harmonic nature of the signal, and the spacing between the overtones is inversely related to these delays. Looking at the spacing in the overtones (approximately 2.7, 5.4, 8.1, 10.8, and 13.5 Hz in the top image), I'd say the charges were about 0.37 seconds apart. I'm not sure how many blasts there were, and I can't tell exactly which mine it came from... but so far it's our best guess and seems to make sense. 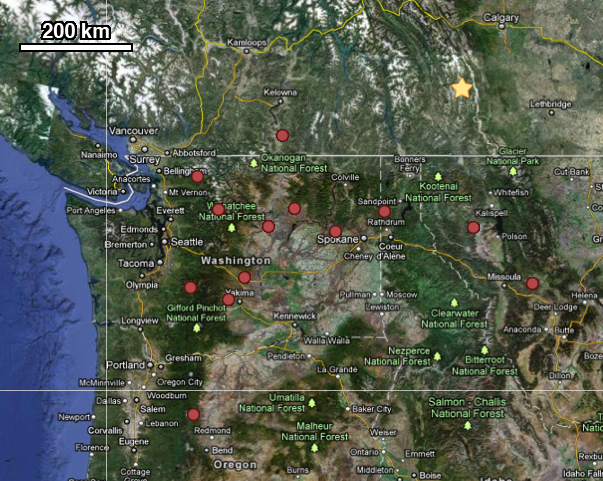 Above is a map of where the blast was probably located (yellow star), and a handful of the stations where the harmonics showed up (red dots). There are still a few nagging details that we haven't quite worked out yet. The harmonics show up weakly, but visibly, on a station on Mount Hood that's a whopping 713 km away from the assumed source. Ripple-fire blasting is an anthropogenic, shallow process, and although this isn't the first time we've seen ripple-fire blasting, this is the first time we've noticed it this far away. The harmonic tremor on Redoubt had energy barely visible out to 100 km, and that was pretty impressive for a volcano.

I found a few scientific papers on ripple-fire blasting, mostly on discriminating between them and nuclear blasts. Near as I can tell it's not unheard of to see these signals between 30 and 300 km away, but I haven't explicitly found anything significantly higher than that. Supposedly, these blasts are performed on a daily basis, but we don't notice them very often here in Washington, and certainly not in Oregon. Was this particular blast favorably oriented toward us? Was it especially big? Was it something else entirely? For now, these are questions that will have to remain unanswered, but at least we can rest easy knowing that it isn't emanating from our volcanoes.