Silent Rumbles Under Our Feet: Slow Slip Events in Cascadia

Silent Rumbles Under Our Feet: Slow Slip Events in Cascadia

Did you know that nearly every year a ground shift equivalent to a magnitude 6 earthquake occurs below the city of Seattle? And that these shifts happen so slowly, that no one on the surface can feel them? These slow earthquakes are known as slow slip events, and they happen periodically as the Juan de Fuca and North American plates slide past each other. Slow slip events are accompanied by a seismic phenomenon known as tremor, which registers on seismograms as imperceptible vibrations that are recorded up and down the Pacific Northwest (denoted as blue dots on the map below). This simultaneous  but repeating over time occurrence of slow slip and tremor is commonly referred to as Episodic Tremor and Slip (ETS). Although ETS events fill a continuous zone along the entire Pacific West Coast from northern California to Vancouver Island (what is called, Cascadia), they actually rupture distinct patches through time. The Pacific Northwest Seismic Network (PNSN) monitors the tremor in near realtime and provides a historical record of past events in the general Puget Sound region.

Figure: Map of Cascadia showing the location of all individual tremor bursts over the past two years. 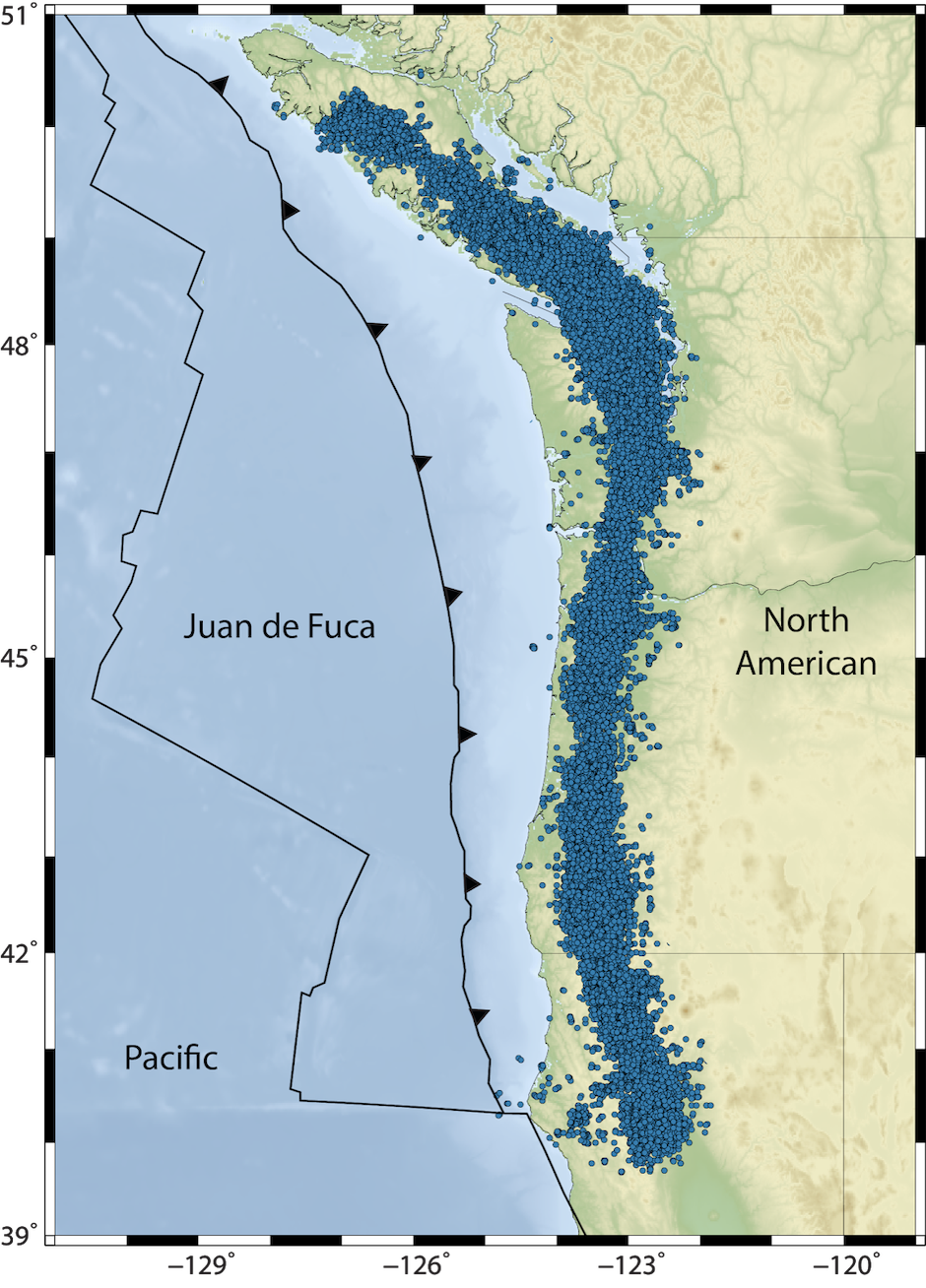 As mentioned above, ETS events occur periodically. However, the periodicity at which these events occur, or the recurrence interval, is location-dependent. For example, ETS events occur more frequently in northern Washington (obout every 14 months) than they do in central Oregon (about every 22 months). This can be seen in the tremor-over-time figure below, where instances of tremor are shown as black dots through time. A vertical streak of black dots indicates elevated levels of tremor and the occurrence of an ETS event. The red circles and numbers associated with each streak represent the hours of tremor during the event, with larger circles and numbers indicating larger and longer events. From this figure, we see that Cascadia is roughly split into three segments (north, central and southern Cascadia), with breaks at about latitude 47N and 44N.  Each segment has its own unique pattern of recurrence intervals. 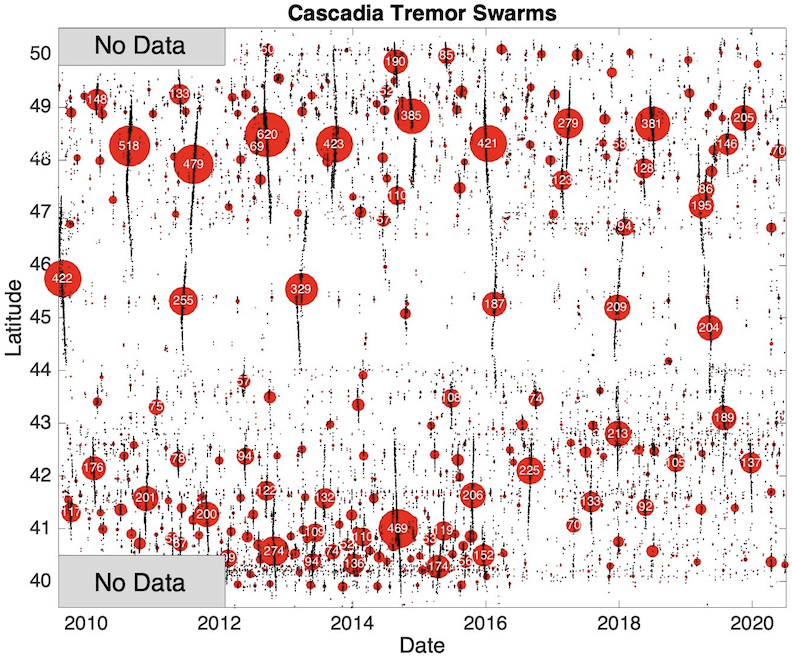 The geological processes that control when ETS occurs in Cascadia are still relatively unknown. Southern Cascadia stands out as having more frequent events, but it is unclear why this is the case. What sets southern Cascadia apart from the rest of the margin and allows it to have such short recurrence intervals between ETS events? One possible explanation may be its proximity to the northern San Andreas fault system. In northern California, the Cascadia subduction zone ends, and the plate boundary transitions into the San Andreas fault, a strike-slip system between the Pacific and North American plates. Located less than 100 km apart, it may be possible that activity on the northern San Andreas fault is encouraging slow slip to occur in southern Cascadia and shortening the recurrence interval in this region. For example, preliminary work has found that there may be a correlation between low-frequency earthquake (LFE) activity on the two fault systems. Tremor is thought to be made up of many small LFEs occurring so frequently that their seismic waves blend together looking like a continuous signal (tremor). This finding suggests that small stress changes on the northern San Andreas fault may be influencing the timing of ETS in southern Cascadia. Further work is needed to evaluate this hypothesis, but researchers at the University of Washington are hoping to tackle this question by creating an extensive catalogue of LFE events and comparing the relative activity on the San Andreas and southern Cascadia megathrust faults. If both of these fault systems exhibit elevated LFE activity around the same time, then this could be a fascinating example of how two major fault systems can interact with each other.

In addition to recurrence intervals, another outstanding question for southern Cascadia is how much slip occurs during ETS events in this region. For example, we know that an average ETS event in northern Cascadia results in ~2 cm of slip on the fault at depth. Determining the amount of slip that occurs during ETS events in southern Cascadia is important for understanding how much strain these events are releasing along the megathrust fault. Ultimately, this strain may be transferred onto the locked seismogenic zone, bringing it incrementally closer to failure. For this reason, ETS events play an integral role in the seismic cycle throughout Cascadia. Information on slip amounts during ETS events can be gained through GPS data, which measure crustal motions on the surface of the Earth. The figure below shows an example of GPS displacements for an ETS event in northern Cascadia during the summer of 2011. The red vectors indicate motions at GPS stations (a few mm of movement), while the blue-purple dots denote tremor locations colored by the number of days since the first tremor occurrence in this ETS event. 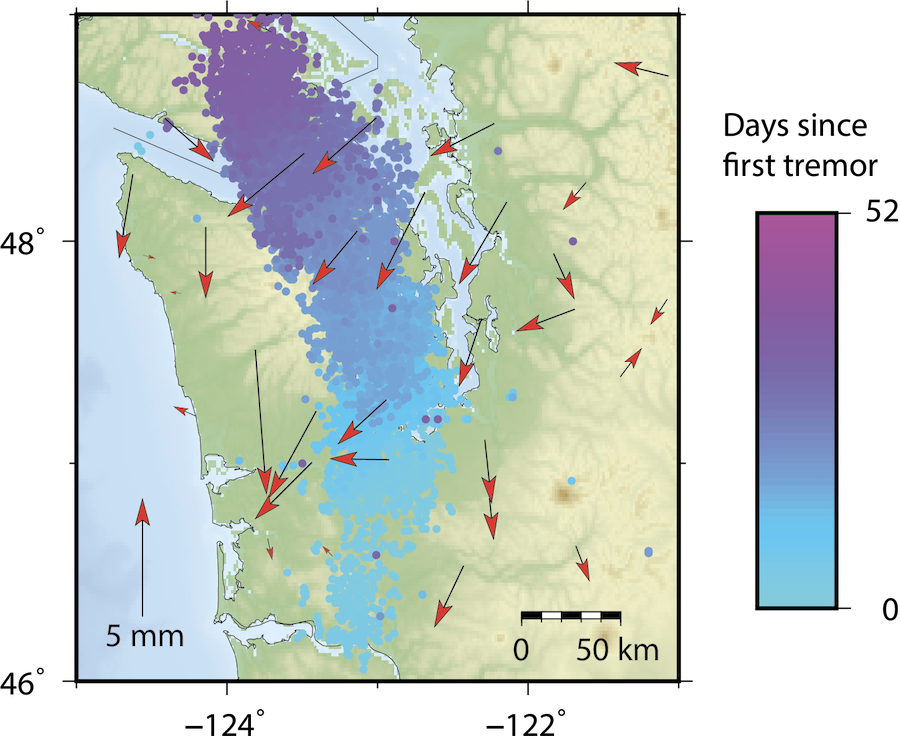 Note how many of the GPS stations near the band of tremor moved towards the coast during this event. This westward motion signals the sliding of the North American plate past the Juan de Fuca plate. These GPS surface displacements can be used to model how much slip is occurring on the plate interface during an ETS event. Unfortunately, the GPS data in southern Cascadia is rather complicated due to the interaction of many geologic processes in the region (subduction, slow slip, regional earthquakes, the San Andreas Fault, etc.), and this has made it difficult to identify and isolate slow slip signals in the GPS data in the past. Fortunately, with increasing GPS data availability in southern Cascadia, there is a growing number of relatively large events that can be recognized in the GPS data. Researchers at the University of Washington are hoping to study these large events and use them to determine how much slip is occurring during ETS events in southern Cascadia

Overall, ETS in southern Cascadia is relatively understudied in comparison to northern and central Cascadia. Despite this region having the most frequent ETS events, it is unclear why these events happen so often and how large any individual event is. However, it is essential that we address these questions if we want to gain a full picture of how slow slip impacts the locked zone in Cascadia, the zone where large earthquakes originate.