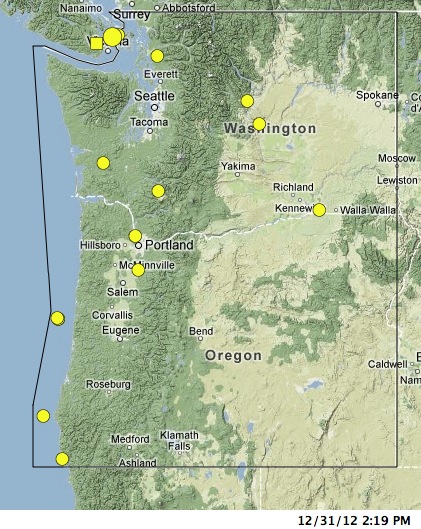 In 2012, Washington and Oregon were relatively quiet earthquake-wise, despite more than 4800 little events.  Here are the locations of all events larger than M3.  The earthquakes are spread across the region, mostly on the western side.

From the timeline of the seismicity, we can see that the largest event of the year, an M4, was less than a km inside Washington State, near Victoria yesterday.  It was felt and reported to our web page by about 800 people.

While several volcanoes had small swarms, nothing alarming was seen.

The most-felt event of the year, an M3.5 south of Portland in September, drew more than 1000 felt reports. 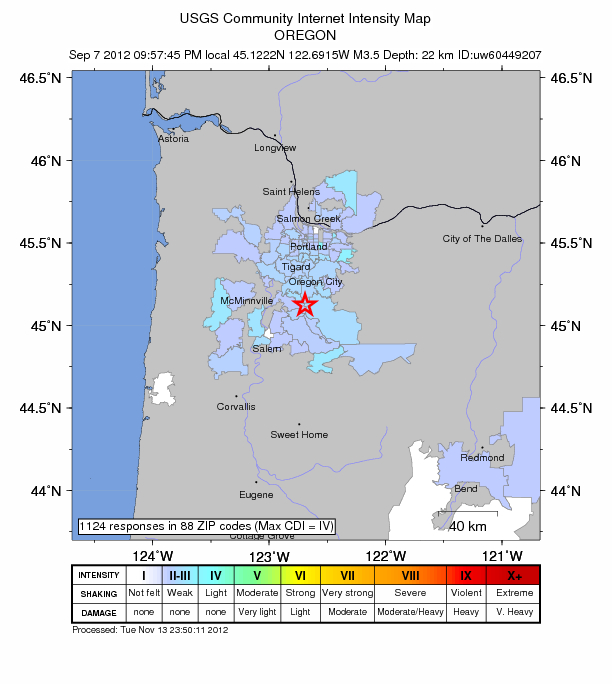 8 more hours left of 2012 in local Pacific time, but the New Year has already reached England as I write this.

There was lots of scientifically interesting earthquake news in 2012.  The M8.6 April 11th earthquake in the Indian Ocean redefined how big might earthquakes be on strike slip faults such as the San Andreas in California, which had previously been thought to top out at M8.  Cascadia had an unusually prolonged termor and slow slip episode reported by our tremor blog and on NPR, which made us ever so slightly nervous.

Finally, a little earthquake humor in reference to the turmoil from the M4.5 earthquake in Maine in October, which did little damage.