We're generally aware that we can barely feel an M3 earthquake, an M6 event can cause some damage, and an M9 can wreak havoc on an entire coast.  But what do those numbers mean, and why do seismologists talk about several different magnitude scales?

Here's a dirty little secret: most seismologists hate to talk about magnitude scales with non-seismologists, for several good and related reasons. First, the whole concept of magnitude reduces a complex and variable process--slip on fault patches with differing strength and frictional properties driven by non-uniformly stressed rocks--to a single number. Second, magnitudes are interpretations derived from quantitative measurements (of ground motion recorded on seismographs), not actual measurements themselves. And third, non-seismologists frequently are impatient with the uncertainties arising from the two reasons just stated. Often folks focus on differences between magnitude estimates for the same earthquake reported by different methods and/or organizations, or magnitude estimates that change in time, as being evidence of some vast conspiracy of government scientists to hide evidence of either ineptitude or deceit (so we seismologists are often a bit defensive).

Chuck Ammon at Penn State provides a good basic overview of how earthquake magnitudes are determined.

Here we just want to point out a few basic ideas that will help non-seismologists understand some of the technical issues the next time a journalist is making a big deal about, say, an earthquake that PNSN reports as an M3.2 and the NEIC (National Earthquake Information Center in Golden, CO) reports as an M3.5 (or whatever). First of all, of course, we're right! Well, so may be the NEIC. As right as anyone can be, at any rate, and here's why. Oh...and I'm only going to talk about what is called Local Magnitude, a measure based on the largest signal (peak amplitude) measured on seismographs. Other magnitude scales are based on the duration of shaking or matching the seismic waveform wiggle-for-wiggle to a model. Those are for a different blog (and our soon-to-be-published "Discovery & Outreach" wepages) and they are all, ultimately tied to the Local Magnitude, (or ML).

Back in the day (1930s), magnitudes started as simply the logarithm of the amplitude of the largest oscillations written on a specific seismograph at CalTech (a Wood-Anderson torsion seismograph measuring horizontal motion, if you must know!). The instrument Charles Richter used was the standard. Really for no other reason than that he had it and so he used it. He used the logarithm of the amplitude because there was such a large range of amplitudes that the compression of scale you get from taking logs made things easier to plot. Some darned earthquake that was 100 km away, made a trace with a peak displacement of 1 mm on his seismograph and he called that the standard earthquake--magnitude 1. An earthquake at the same distance that made a displacement of 10 mm was a magnitude 2, 100 mm was magnitude 3, and so on. "Smaller" earthquakes closer to the lab or "larger" earthquakes more distant might produce the same peak amplitude, so the formula includes a distance correction for earthquakes not at the standard distance. This explains an enduring mystery to many folks--negative magnitudes. An earthquake that wrote a record with a peak displacement of 0.1 mm would be a magnitude 0, right? And if that earthquake were closer than 100 km, well ... it would have a negative magnitude. Remember: Magnitudes are a relative size estimate. Nothing absolute about them (but, perhaps, Charlie Richter's arbitrary "standard" earthquake and seismograph); no physical units ascribed to them.

What do you mean by "bigger"?

But why do I feel compelled to encase the terms "smaller" and "larger" in quotes so much? Well, because earthquakes, like elephants or people, get bigger in different ways. Both a basketball player and a sumo wrestler are clearly "bigger" than a child or a short lightweight person, but that doesn't make them equally big or similar in appearance. Bigness, it turns out, may be in the eye of the beholder. When physical scientists wander into pickles like this they usually turn to the concept of energy to compare things. And so, too, with earthquakes. 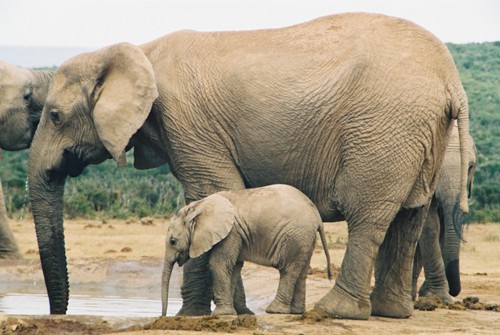 An earthquake is slippage of one side of a fault against the other side of a fault. It turns out that a more robust measurement of the energy it releases is the distance it slips times the area that did the slipping. An M6 earthquake, for example, might involve a meter of slip on a fault plane 10 km by 10 km.  The simplest measure of the size (as energy) of the resulting earthquake, called the moment, is proportional to the area (length times width) of the fault, times the average amount of slip.  And since fault ruptures range from cms to hundreds of km in dimension (and slip from millimeters to meters), the difference in moment between the smallest and largest earthquakes varies by many, many orders of magnitude (getting the idea how the name "magnitude" for earthquake size originated?), and those non-logarithmic numbers are inappropriate to give to the public, most of whom (like me) are buffaloed by balancing a nice linear checking account balance. (Imagine: Nicely coiffed news reporter asks "Dr. Bodin, how big was the earthquake?", frowzy grumpy seismologist answers: "Oh it was approximately 54,000,000,000,000,000 newton-meters, give or take a few million, Bob". You see the problem....)

There are invariably devils amongst the details.  It turns out that earthquakes radiate different amounts of energy as seismic waves in different directions, for example. (One way we tell the orientation of the fault that broke). And even the direction a rupture propagates can lead to different amplitudes in different directions (called "rupture directivity"). For this reason the number and geometry of stations around an earthquake, and how you average them (remember---magnitude is ONE number!)  is important in coming out with that one number everyone craves. Also, the soil or rock that a seismometer is placed on can de-amplify seismic motions, or even amplify them, so each site should have a "site correction" in addition. Also, the background noise at the time of the earthquake signal's passing can add to, or subtract from, the peak amplitude measured. Another reason to average in as many station estimates as you can. You get the idea.

So it's really quite easy to see how early on, we compute an automatic ML without looking at the traces, but then upon review decide that we should throw out channels that are really too noisy, or that may have been really broken at the time. And that changes the magnitude estimate to one we're more sure of. And how NEIC and/or PGC in Canada, and/or CISN in California look at the THEIR stations and compute a different magntitude value. As a rule of thumb, though, I'd say most seismologists aren't at all surprised by differences of up to .5 magnitude units in early estimates. However, when different organizations report the same magnitude type that vary by more than that after about 1/2 an hour from an earthquake, there was probably a more significant error involved.