The events surrounding the 2009 L'Aquila earthquake have been well covered in the general press and the scientific press, and there are several lessons to learn - how to deal with long-term hazards, how to deal with amateur doomsayers, how to deal with uncertainty, how to cover one's butt. An excellent overview is the report by Tom Jordan and colleagues. Two figures from Richard Walter's GRL paper show the setting - the earthquake-peppered Apennine mountains in Italy, and the local faults and topography around L'Aquila. 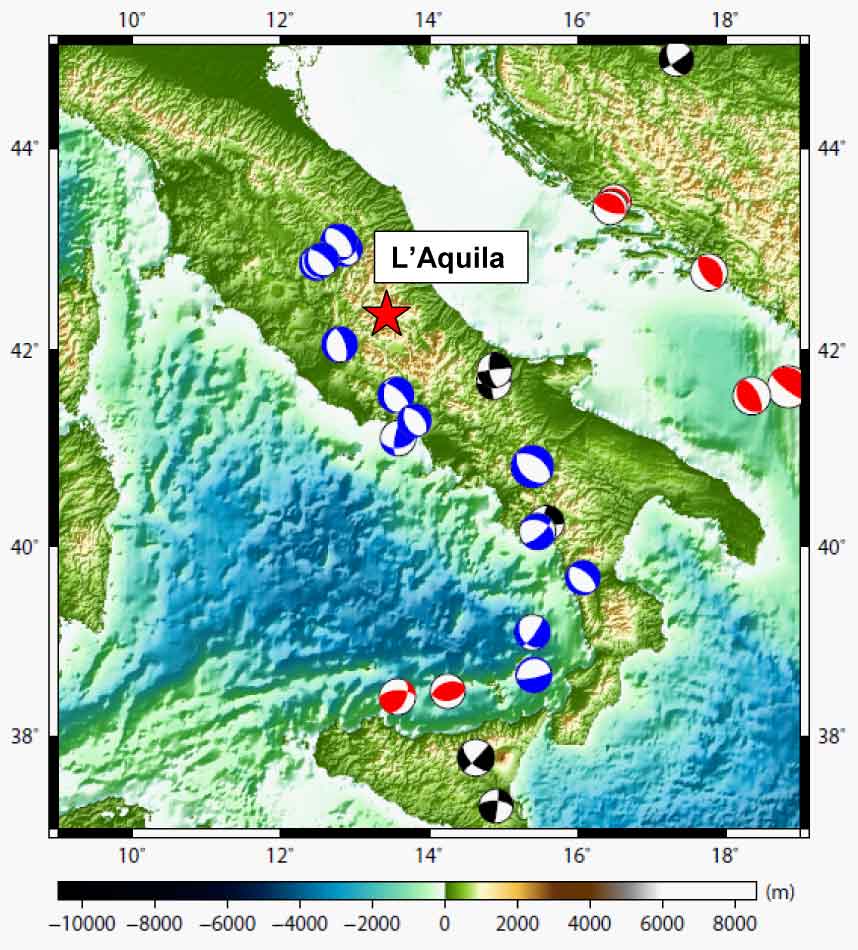 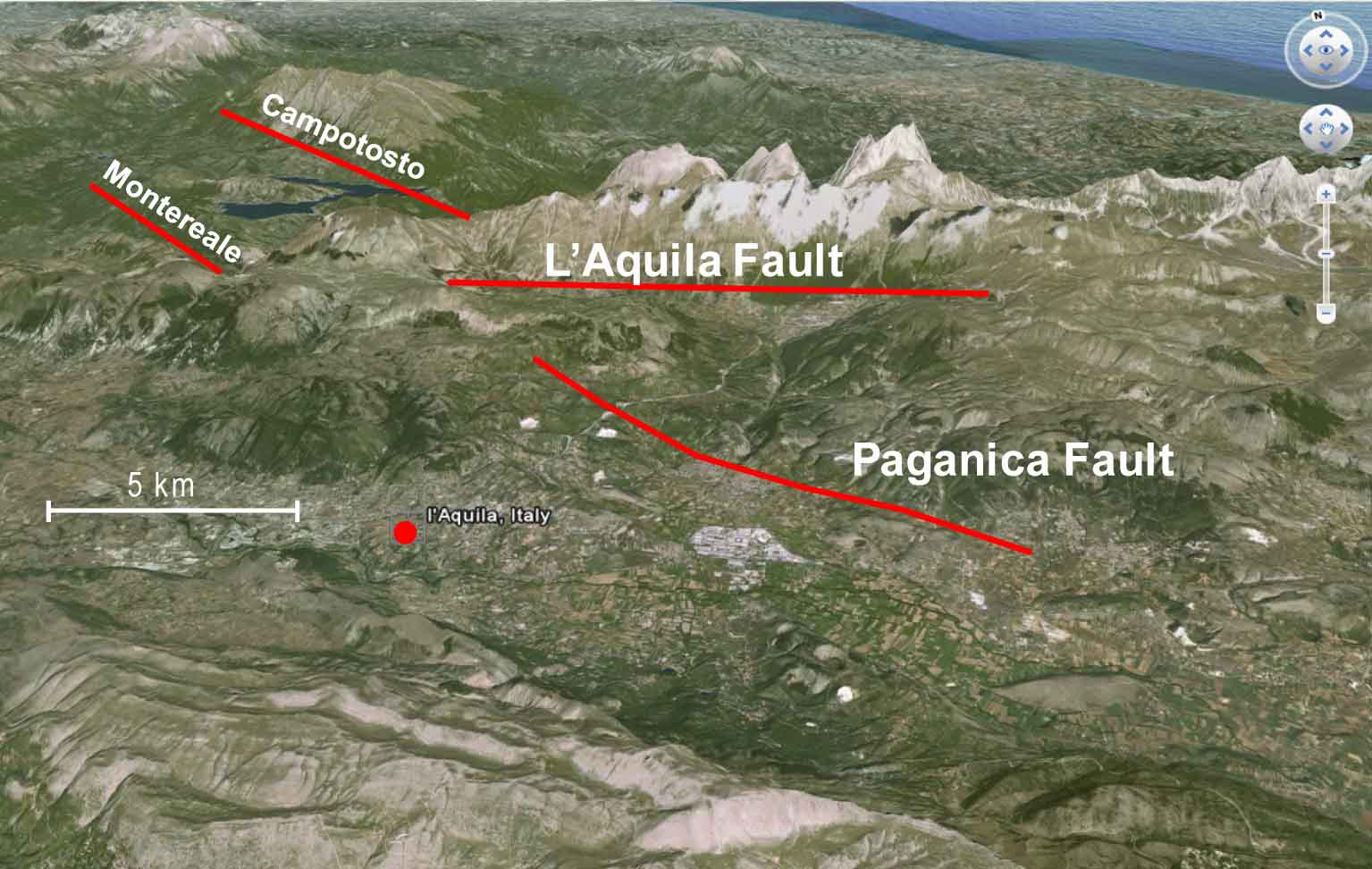 I'll concentrate on one, the impossible job of a scientist to inform the public of the known, the possible, and the unknown.

Many complications were present. An energetic earthquake swarm was shaking the countryside daily. A technician who thought he had discovered the Holy Grail of earthquake prediction, but was deluded like thousands before him, was driving a van with loudspeakers telling the citizens to evacuate a nearby town. The seismologists had been telling the government for years that the buildings in the area of L'Aquila needed reinforcement, and been mostly ignored. Resentment of the incestuous system of hiring Italian government workers generated distain for the scientists and emergency managers.

The simple story is that an emergency manager told the population not to worry, "earthquake swarms release pressure, have some wine and relax", and the scientists, who were not present, did not later issue a rebuttal. An M6.3 quake struck several days later and several hundred were killed. The scientists, which include the nation's top seismologist, have been charged with manslaughter. The trial may take years to reach a conclusion.

People have taken one of two sides. Scientists say the trial is a farce - no one can predict earthquakes. Italian prosecutors seem to say no, the scientists are being tried for not properly advising the citizens, they did not recommend commonsense steps to avoid the earthquake danger while the swarm persisted, whether or not the earthquake struck.

Both sides miss the pivotal point, in my view, which I've offered generously, for example in this correspondance to Nature.

Plagarizing my letter:  At the heart of this case lies one fact — the danger to L'Aquila residents at the time of the earthquake. More precisely, what was the chance that a particular individual would be killed in the subsequent 24 hours, given the frequency of low-magnitude tremors around that time and the best available science?  That probability, even in L'Aquila's weakest class of building, has been estimated at less than 1 in 100,000 on the night of the earthquake. The occurrence of many little earthquakes does not make the chance of a big earthquake very high.

The hazard level in L'Aquila in the days before the earthquake was insufficient, by two to three orders of magnitude, to justify evacuation of even the weakest buildings. The scientists were right: sitting tight was a good recommendation and, in view of the low risk, all the published quotes from the seismologists were accurate.

If the danger was high, the seismologists should tell people to take action. But the danger was too low to justify any action except taking the long-term, permanent steps to fortify buildings. However, the actual level of danger at the time, so far as I can tell, is considered irrelevant for the trial. The unstated assumption is that if the earthquake happened, the scientists should have seen it coming, i.e., predicted or at least forecast it.

Even worse, the one seismologist reported as a witness in the trial, Lalliana Mualchin, testified "Frequency is not important, what really matters is the largest earthquake we can expect", as reported in Nature. Again, the argument is the true odds of disaster are irrelevant, we should always prepare for the worst possible case, no matter how unlikely, which would basically require leveling the historical hearts of many cities in Europe. As the swarm does not change the worst case - this swarm was not unique - adoption of Mualchin's argument is, in my view, more of an indictment of the local building laws for the past decades than the response of scientists to an ongoing swarm. 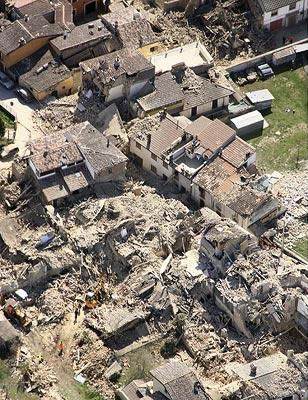 The lesson here?  We should estimate, as accurately as possible, the danger of earthquakes, and take the mitigation steps justified by a cost-benefit analysis. With accumulating scientific evidence from around the world, our estimates are getting better. In contrast, given the infrequency of bad earthquakes at any one place and the documented inability of people to intuitively assess risks of rare events, winging it without scientific and political judiciousness is foolish.

The situation in Italy is worse than foolish, and underlying human frailties may be present in many countries. The trial lies midway between Monty Python and Franz Kafka, and is terrifying to me as the seismologist responsible for monitoring the US Pacific Northwest.