Nature delivers sound and fury from above as well as below at volcanoes.

The lightning in big storm cells packs a punch, focused at the top of tall cone-shaped volcanoes.  The high ground is effectively a lightning rod, providing an easy path down from the heavens for the current.  Also, the steep topograph can cause updrafts, hence convection and storms.

Mount St Helens and Newberry volcanoes show a fair amount of lightning, perhaps because both have many seismometers nearby and Newberry is out east in thunderstorm alley.

Which brings us to this week's activity.  Thursday a half hour burst of energy showed up on many of the stations around Newberry volcano.  10 minutes with five bursts are shown below (click to expand).  The plots show records from nine station in the form of spectrograms.  The crude location map below shows the four bursts I was able to locate near the peak, and three more that I just located at the station reporting the first arrivals.

Newberry has proven a rich source of mystery signal with the new instrumentation installed by CVO last year - one we haven't figured out and ice quakes in the mountaintop lakes. 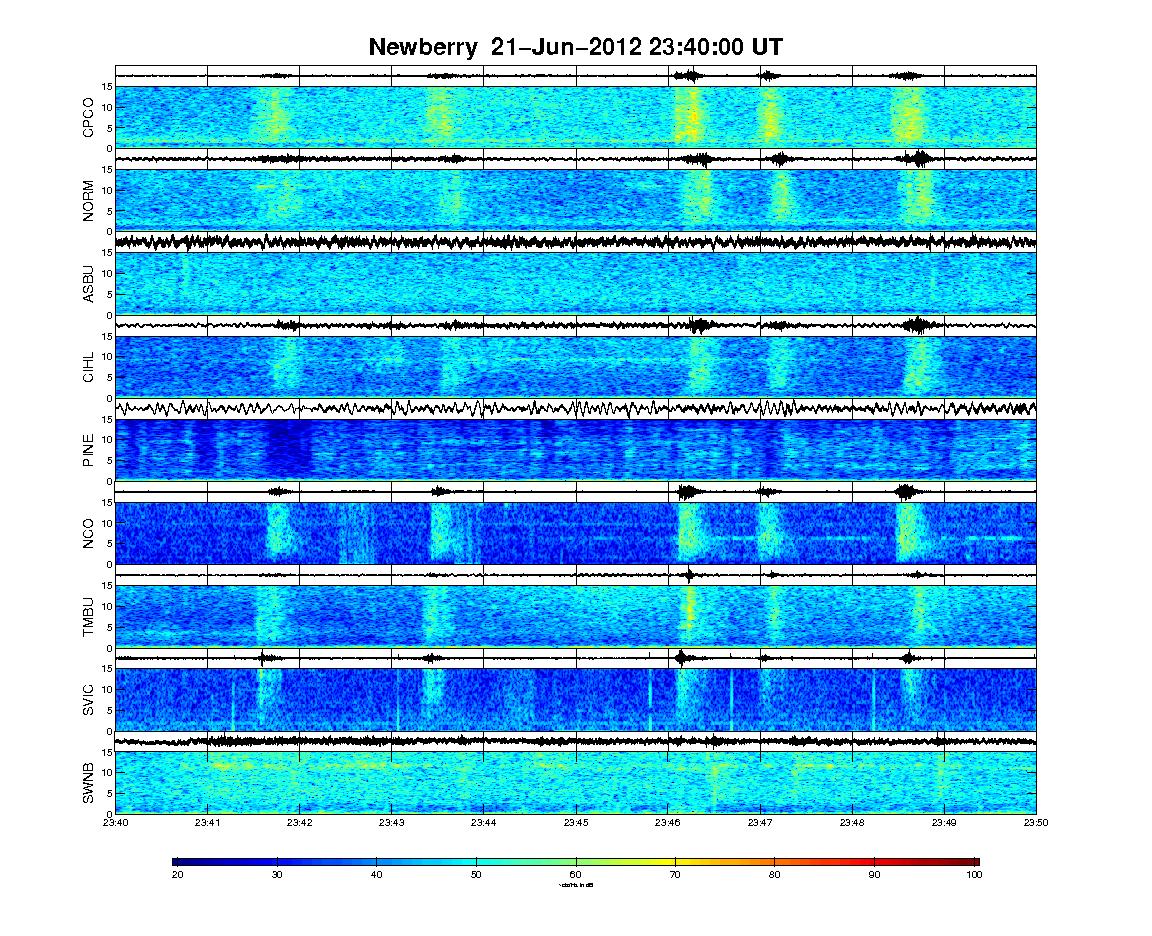 Initially, I thought this bursts were seismic waves.  The spread in timing is not as great as would be expected for acoustic signals - sound waves travel only 300 m/s compared to seismic waves, which zoom at kms per second.  Seismic events near the volcano could be either volcanic or related to the lakes nearby (or something else). 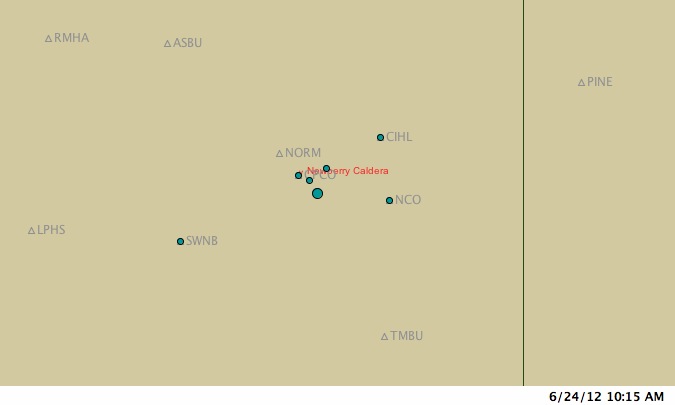 But several details revealed the true source.  First, station SVIC (second from the bottom) below shows a short burst about 15 seconds before each rumble.  This is likely the EM pulse of the lightning, traveling at the speed of light, disturbing the seismometer electronics.  A time separation of 15 seconds suggests the thunder was generated about 5km above the ground (321 m/s X 15s).

Second, Seth Moran of the Cascade Volcano Observatory reported storms in the vicinity, and the possibility that the lightning was cloud-to-cloud, which could arrive at many stations at nearly the same time (sounds generated near the surface would be many seconds earlier at some stations than others).  Third, the folks at Altarock, who are testing new geothermal drilling techniques on the side of the volcano, reported having to flee the volcano due to the repeated thundrous peals of lightning and thunder.  Finally, the EarthNetworks lightning network detected of several cloud to cloud and ground lightning strokes at these times. 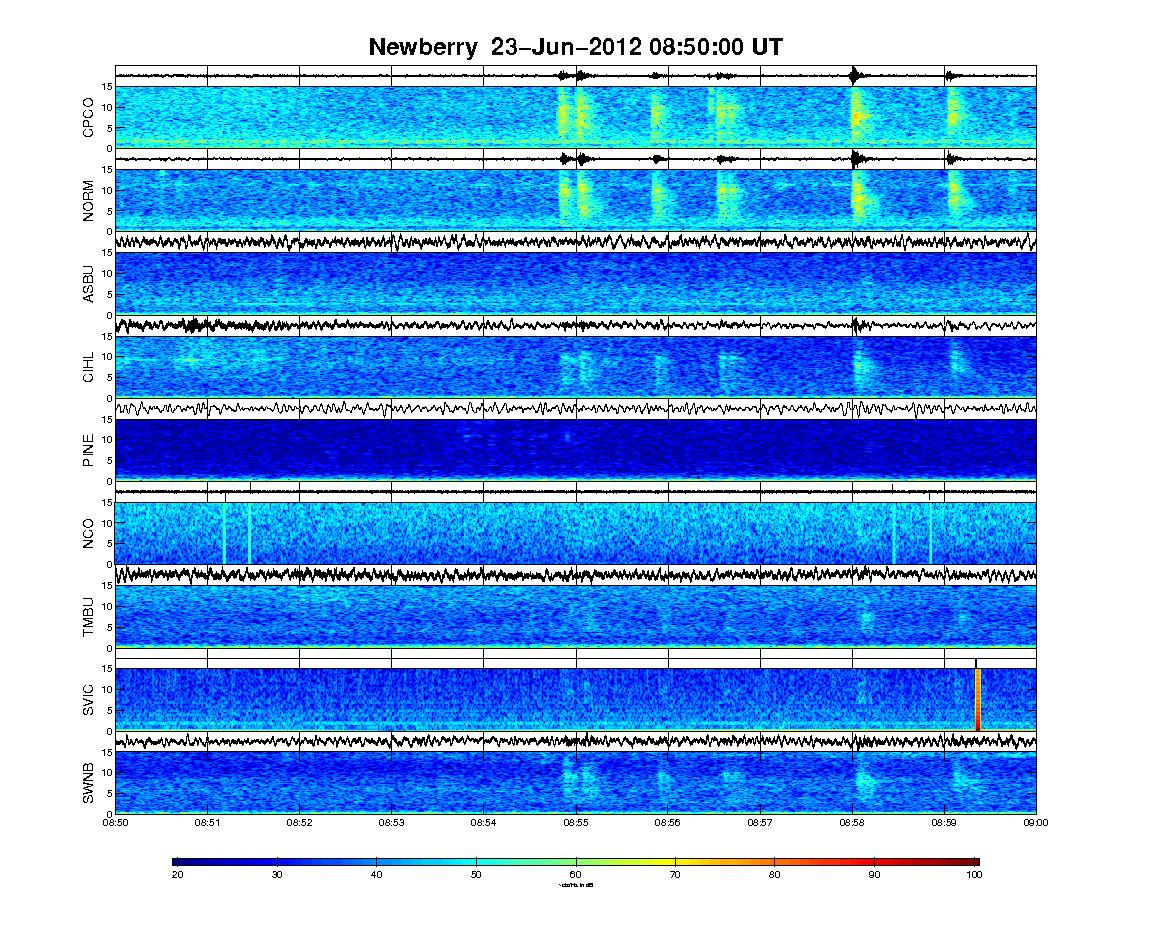 Once I realized these facts, the burst of events on Newberry on Friday (last figure) was not a mystery.

Dr. Seth Moran of CVO and Profs. Bob Holzworth and Steve Malone at UW contributed vital information for this post.