Is the plague of great earthquakes this decade a sign of increased danger?

Is the plague of great earthquakes this decade a sign of increased danger?

It has been the decade of very large earthquakes, with ones in 2004 in Sumatra, 2010 in Chile, and 2011 in Japan, plus several others. This led to speculation that we are now in a time of enhanced risk for an M9 on our local Pacific Northwest coast. The topic was mentioned in articles in OregonLive two days ago and yesterday. Most notoriously among scientists, Time magazine published the bizarre idea that the occurrence of the Japan, Sumatra, and 2009 New Zealand quakes is ominous for the Pacific Northwest. I've been following this discussion as a member of NEPEC. 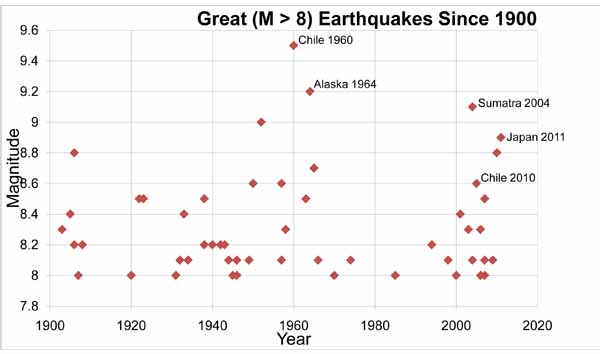 Last week, a new paper emphatically said that the spate of numerous very large earthquakes in the last 10 years is likely a coincidence, NOT due to the first events helping to trigger the later events, which would have implied that our coastline has just been encouraged to spawn its own megaquake. This report may have triggered the OregonLive reports. The author, Peter Shearer, is known for his careful and authoritative work, and is one of the few seismologists who is a member of the National Academy of Sciences.

While the details are technical, basically there has been no surge in smaller earthquakes, and just a few more M9s than one would expect on average; not enough to indicate the rate of great earthquakes has risen. The most striking rise only shows up if one looks at the trends in just the right way - which is a red flag for scientists that a trend is not reliable.

It is certainly true that any earthquake raises the risk of more earthquakes for a while close to the first earthquake. And these recent great earthquakes have indeed triggered impressive local aftershocks. The 2004 Sumatra event triggered the 2005 M8.6 and 2007 M8.5 events just to the south and the Japan earthquake triggered an M8 twenty minutes later, an M6 event right under Mt Fuji, and is still triggering M4 and M5 aftershocks daily. 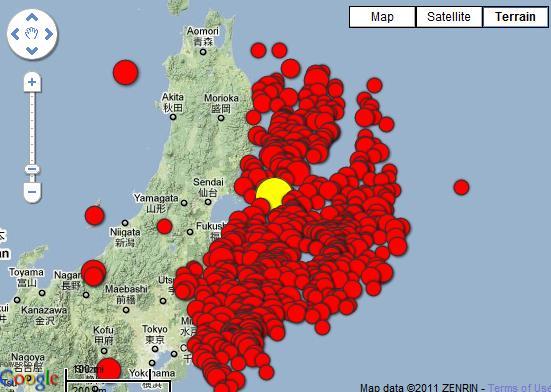 So our risk is about the same as it was ten years ago, and is likely to be ten years from now. Notwithstanding the attempts by the press to make news and arguments from unlikely speculations.

I'll talk about the consensus best-guess about our odds in the next blog entry.