When is an ETS an ETS?

When is an ETS an ETS?

After watching the Wech-o-meter for a few days I thought it might have already started early like the one last year did. Several days with strong tremor such as the 8 hours on Aug 14 shown here got our interest up. This region is close to that in which previous major ETS have started. 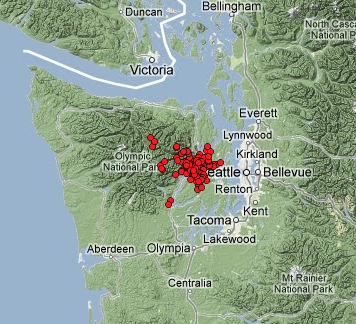 In preparation of being able to follow the next ETS we set up the a BLOG page for the summer-fall, 2012 ETS to put our observations as things progressed. We were ready, but did not "push the tremor start" button.

In discussing this amoung ourselves here at the UW calmer heads prevailed. Ken Creager did a few comparisons with previous ETS and with tremor bursts that were short lived. His comments and a figure are as follows:

To shed light on whether this current tremor activity represents the third August ETS in a row I have taken a look at previous moderate tremor swarms. Since 2006, Wech's catalog has 5 Northern Washington ETS events and 6 other Northern Washington tremor swarms that had durations ranging from 40 - 80 hours. The current event is just over 30 hours (through yesterday, being careful not to double count tremors from SW and NW). One of those 6 events was the 80-hour false alarm we called in March, 2008 that led to installing the Texans (and finding the first Cascadia LFEs!). So based on that I would give the current activity less than a 50-50 chance of developing into an ETS event. 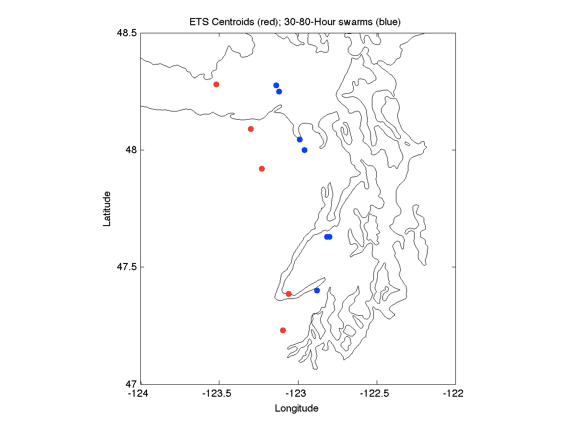 Note that the blue dots are all clearly east-northest of the red dots. Ken argues that these down-dip tremor periods are distinctly different than the tremor when a main ETS occurs. Ken's comments generated a response from none other than the orginator of the Wech-o-meter, Aaron Wech who is sniffing out tremor amoung other things on a PostDoc in New Zealand. Aaron observes:

An unsolicited thought regarding this question:
I'm wondering if it really matters though. Don't get me wrong, this isn't some jaded ex-Cascadia pessimism coming out. But I think the question of "is this an ETS?" is a bit of an antiquated one. A better question is "how big will this event be?". Slip is slip. These things happen all the time, all up and down Cascadia. Updip and downdip. Are we asking whether this one will be large enough for GPS to be able to resolve it? Or are we asking whether this one belongs to a special family of geodetically confirmed quasi-periodic events particular to the updip region of Northern Washington? If the latter, why would that matter? Different parts of the fault have different pediodicities, so I'm not sure thinking of it in a special "ETS" sense is that illuminating, unless one thinks that the difference between an 80 hour and 150 tremor swarm is more than just size. But asking how big this will be, where it will rupture, etc. is a different matter. In this sense, rupture history via past tremor/slip catalogs becomes important, as Ken is showing here.

Ken's resonse to this, thoughtful as ever:

I am not a big fan of the ETS label itself as I think it can mean different things in different places and different things to different people. However, I find myself using it as a short hand for very specific behavior in northern Cascadia.
As you point out, some more relevant questions are:
How big will it be?
What part of the interface will it rupture?
Are "ETS" events somehow special, or just part of a continuum of slow-slip events?
The ability to forecast the answers to the first two questions has been critical to field work for the 2008, 2010 and 2011 events because for each we needed to deploy power to sensors before active tremor lit up the region below our arrays. We have caught all three events and had one false alarm for the biggest interETS event ever that stopped after 81 hours in March, 2008. Aside from that, the ability to forecast the future of slow slip is perhaps less relevant, but pretty cool anyway.
The third question is an interesting one and I focus attention on Northern Washington because that is where you have the longest, relatively uniform, record. I do believe that events that we call ETS in northern Washington/southern Vancouver Island are different than the smaller swarms in the following ways:
• The smallest ETS event has three times the duration of the largest interETS event (see table below).
• All of the 5 most recent ETS (uniformly well recorded) events rupture the up-dip region from at least mid Puget Sound to southern VI.
• Few if any inter ETS swarms rupture the updip region and non have a very large along-strike distribution of tremor.
• All ETS events have a well organized along-strike progression with similar speeds of order 10 km/day.
Perhaps it is the well-organized progression and rupture of the updip edge that sets these events apart from other slow slip events. If so, as you point out, this should be tested Cascadia wide as well as in other subduction zones to see if this is unique to northern Cascadia, and/or if our observation window is too short and future slow-slip events blur the apparent distinctions described above.
For the smaller swarms, a progression is sometimes resolved, but these merit further study to estimate a propagation speed and direction.
So this is the way science gets done. Discussions back and forth with observations and analysis to back them up. I would throw a few comments into the fray here.
Indeed, Aaron is exactly and  totally right (he has a PhD to prove it). BUT, for public and operational purposes he is wrong.... or maybe just too caught up in the detailed semantics. I go along with Ken's comments about why it is "OK" to call the big Tremor periods with documented Slip that occur fairly Episodically "Episodic Tremor and Slip (ETS) even though the periods of shorter tremor may be (but with some differences) the same thing. Besides it makes the Canadians happy that we use their name. Other groups around the world use a bunch of different sorts of terms and names so us Pacific Northwesterners  and Pacific Southwesterners (Canadians) should stick together in the face of foreign terminology.
Stay tuned for the next couple of months to see when and how the next ETS gets going and will we lean anything new from it. Unfortunately, we have no special experiments in the field this time such as the Array of Arrays for the previous three years. So eyes on the wech-o-meter and/or follow the tremor-BLOG.