The Spokane Swarm about 10 years ago

The Spokane Swarm about 10 years ago

As the seismic activity in Oregon and Washington is mild this week, today I'll review a sequence of activity from about a decade ago.

Earthquakes can come either as a big pop and then some aftershocks, or else as a fairly steady dribble of earthquakes for hours, days, or months. The former is known as the mainshock-aftershock pattern. The latter, persistent activity, is known as an earthquake swarm.

Spokane in 2001 had the most noticed swarm in the northwest in recent decades. Dozens of earthquakes sputtered on for nearly a year. The largest of the quakes was only M4, so nerves were frayed but little damage done. As the fault moving in the earthquake was very shallow, in the top km or two, even earthquakes of magnitude 2 and less were felt as sharp pops. We installed several new seismic stations to watch carefully. 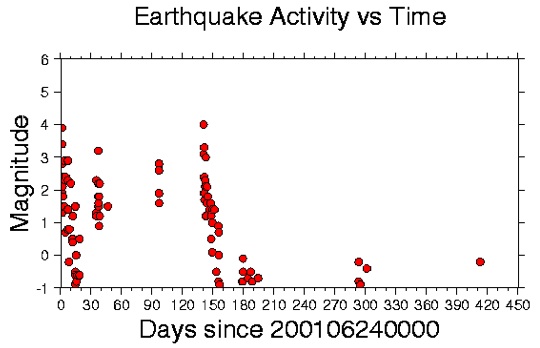 In June and in November, there were days with numerous felt events. The November booms were especially disconcerting in the aftermath of 9/11. We've found no report of a previous earthquake in the 120 years Spokane had been inhabited. Perhaps the earthquakes formed a line along a dimly perceivable fault trace, or perhaps the locations are not so accurate - not many instruments were in the area nor close when the action started. 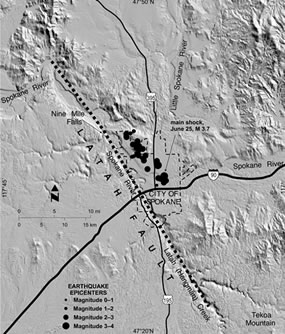 The events eventually stopped. To this day, we do not know exactly what process triggered the action. Scientists speculate about fluid migration through the ground, perhaps natural, perhaps induced by man, or else faults that are episodic in their activity for other reasons.

In retrospect, from the knowledge we have from watching swarms around the world, the danger of a disastrous quake never rose very high, but one never knows for sure what might have been coming. Or might come next year. In L'Aquila Italy in 2009, a similar swarm led to a devastating M6.3 earthquake, and the ongoing trial of the national seismologists for manslaughter for failing to predict it!

There are more details deep on USGS website and this NisquallyQuake wordpress site. This site has an excellent review of the sounds caused by earthquakes.