The two avalanches on the afternoon and evening of May 14, 2014 at Mount St. Helens had some of the same characteristics of a large avalanche in the spring of 2011.  These seem to have originated high on the east flank of Mount St. Helens and descended onto the Plains of Abraham where they converted into a very wet and slow slide/flow that continued down drainages for several kilometers.  The first event at 2:44 pm PDT (21:44 GMT) showed up as a very strong seismic signal at station EDM indicating that it may have passed quite close to this station on East Dome. It only lasted about two minutes indicating that it may have been smaller volume than the later slide.  The second starting at  5:47 pm PDT (01:47 GMT) did not produce as strong shaking at EDM but lasted for about eight minutes.  Both events had what looked to be a "stopping phase" near the ends of the signals.  We think this is when wet snow slides become highly chanalized and while flowing as a mass (slug flow) they loose enough fluidity to start stopping.  At some point the  whole thing refreezes and stops as a unit putting a large force into the ground that we see as a seismic stopping phase.

A friend and colleague flew over Mount St. Helens on May 15 and reported seeing two avalanches on the east side.  Additional details and photos will be posted here on May 19.

Here are the seismograms for the avalanche starting at 2:44 pm PDT as seen on eight seismic station on and around Mount St. Helens (see map below for stations locations).  Note that on station, EDM the signal is clipped (saturating the recording system) for almost two minutes.  Also, note that there is a small extra burst of energy just after 21:46 GMT that shows on most stations.  This we think is the "stopping phase" generated by a large mass of snow coming to a stop all together. 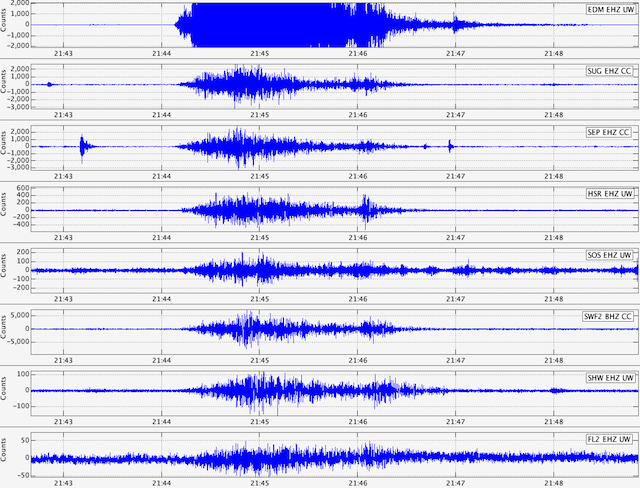 Here are the seismograms from the same stations for the second and much longer lasting avalanche that started just after 5:47 pm PDT. Note that the shaking is strong on EDM for about eight minutes but is never clipped.  The brief, sharp signal on station SEP at about 01:51:40 GMT is probably a very tiny, local event on the dome and unrelated to the avalanche. Note the very strong "stopping phase" in this case showing well on all stations just before 01:55 GMT. Estimate of the seismic wave arrival times on the different stations allows us to get an approximate location of this event which is about 8 km ESE of the center of the crater. 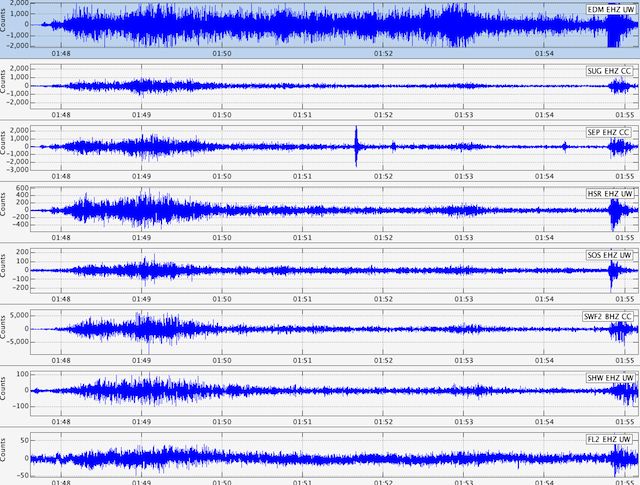 Here is a map of Mount St. Helens showing the location of the seismic stations recording these avalanches. Approximate locations as observed and photographed on May 15 were added to this map on May 20 after getting photos and descriptions (see below). 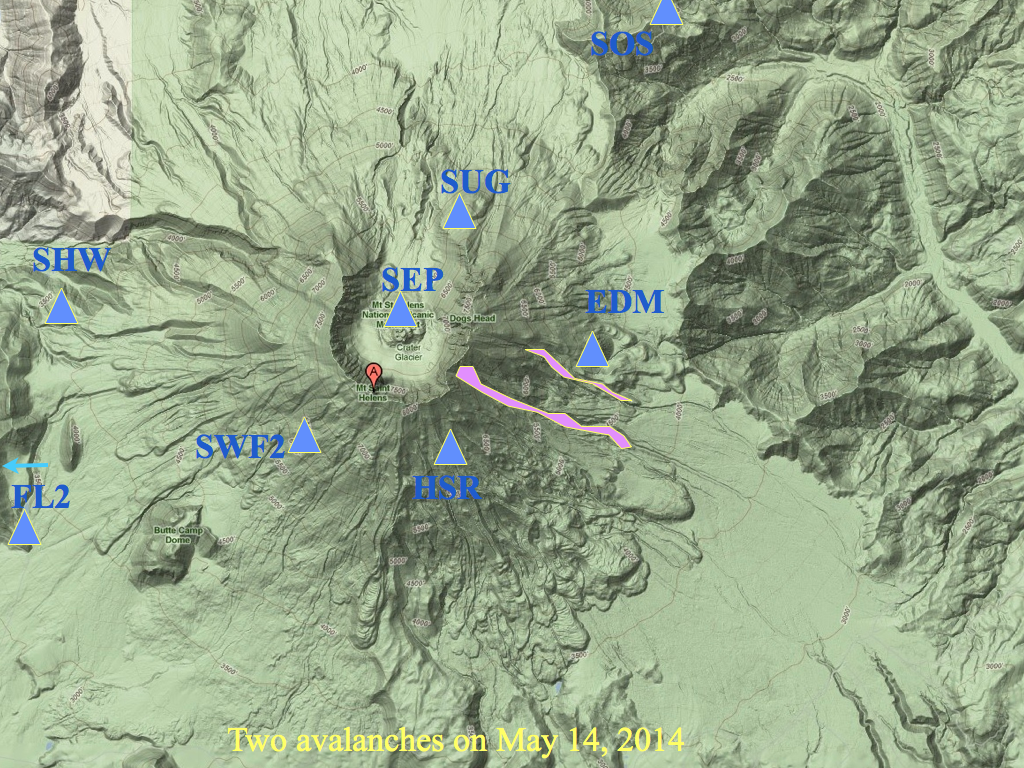 Today I received some photos taken by C Dan Miller, a retired volcanologist with CVO who flew over Mount St. Helens on May 15.  His photos and descriptions and annotations provided by Rick Lahusen, another CVO volcanologist (currently active) point out that my previous interpretation was off a bit.  It seems these avalanches were not as big as I previously thought and certainly did not travel nearly as far as I estimated before.  Below is one of several photos provided by Dan.  I have added arrows showing where the two avalanches start (upper arrows) and terminate (lower arrows).  The second and larger avalanche is on the left with right pointing arrows and the first and smaller one is on the right with left pointing arrows.  The approximate locations of seismic station, EDM is shown as a circle.  Clicking on the photo will provide you with the original higher resolution version. 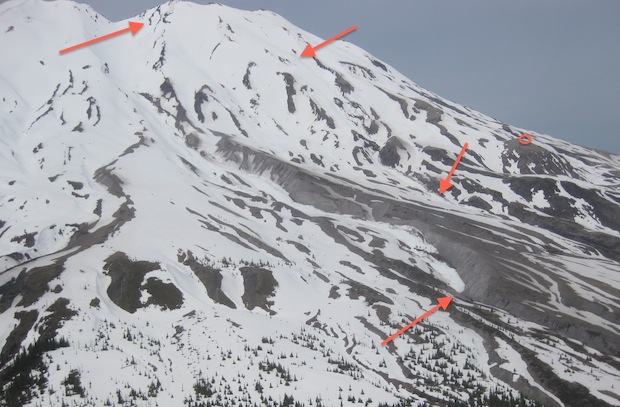 Thus the photos confirm the two avalanches and their relative sizes but my previous interpretation of the distance traveled by the second avalanche was greatly over estimated.

Now, in response to the comments posted by John McBride, as far as I know there is not a comprehensive catalog of all seismically observed avalanches.  Of course, such events would be only a small set of the actual avalanches taking place.  I think that the Northwest Avalanche Center maintains a catalog of reported avalanche observations.  This also would be a small subset of all that take place since many avalanches are not observed and many that are observed are not reported.  We do have some other avalanche observations in our PNSN notes and catalogs and I may try to recover those in some useful way for future reference.  Thanks for your suggestion. I do think the recent ones at Mount St. Helens will have no effect on the trail system since they probably terminated above the trail.

I don't know how to respond to the comment of Beej Baily since our work is actually based on observations and data analysis and her comments don't seemed to be based on anything that I know of.  There currently is no evidence that there is anything unusual going on in the Cascades or anywhere else based on actual observations.