Historical Earthquakes in the Portland Area

Historical Earthquakes in the Portland Area

Between 1877 and 1961 four earthquakes with modified Mercalli intensities of VI or VII (in 1877, 1892, 1941 and 1953 occurred near Portland, OR. Please remember that earthquake intensities are not the same as magnitudes. Intensities are a complicated function of earthquake magnitude, distance from the earthquake and local geologic conditions. 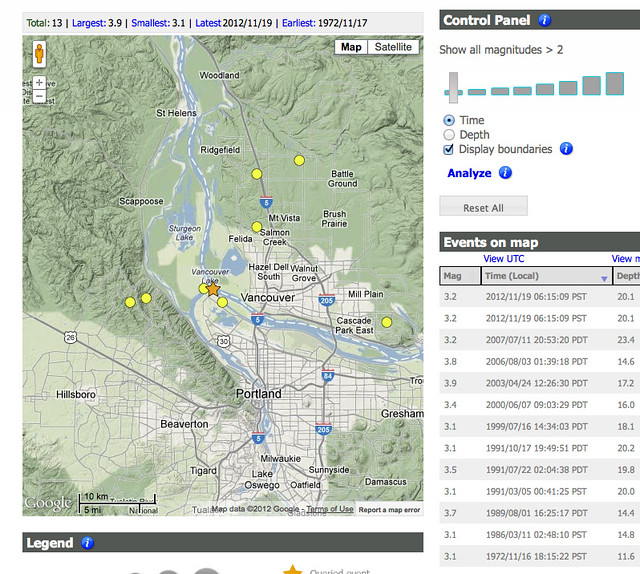 In the time period 1980-2011 fourteen earthquakes with magnitudes between 3.0 and 3.9 occurred within a radius of about 35 miles from downtown Portland.
Over this 32 year period there has been a persistent zone of earthquake activity extending about 1.5-2.0 miles northwest and southeast from the epicenter of today’s (19 November 2012) earthquake. Since 1999 this zone has been the source of four earthquakes with magnitudes of 3.0, 3.0. 3.1 and 3.9, and now a fifth, with magnitude 3.2. For convenience, we refer to this zone as the Sauvie Island zone, though it extends southeast beyond the end of Sauvie Island.