It has mostly been seismically quiet recently, although last night and this morning a swarm has been active in southern Oregon.  With four events above M2 and one above M3, it is notable.  On a map, little detail is resolvable because our seismic network is thin in this part of the Pacific Northwest. 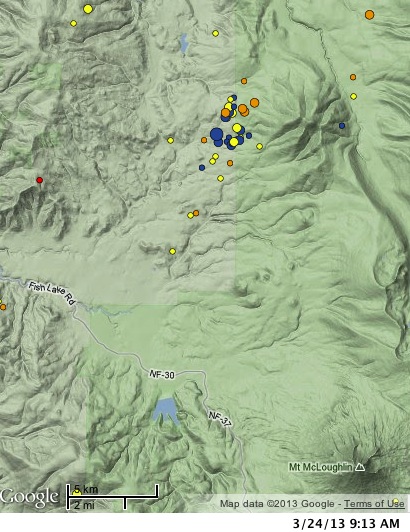 This plot shows the earthquakes in the region since the 1960s, there is clearly a concentration just west of a slight bump of a mountain, with no name that we can identify.  One guess is that the bump is an exhumed throat of an ancient volcano.  Note Mount McLoughlin in the lower right for reference.  We cannot resolve details of the earthquake pattern, nor even the depth, except to say the quakes are in the upper 20km, due to the fact that the nearest station is 35 km away. 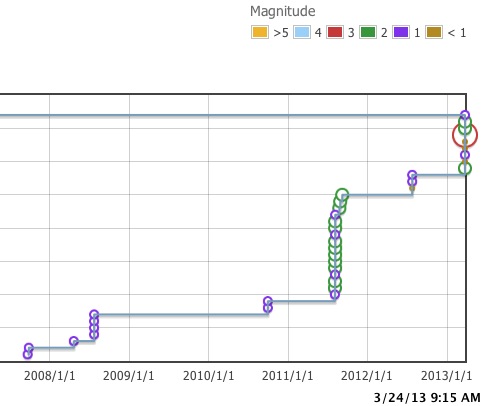 The plot of cumulative numbers of earthquakes shows the 9 so far in the latest sequence, and a greater number in 2011, and lesser swarms in 2008 and last year, with a few even more minor episodes.

The plot of earthquake magnitude vs time shows events only exceeded M2 this year and in 2008, and the event event last night of M3.1 is the largest.

So I've described the earthquakes, but what is driving them remains a mystery.  We scientists now have more tools at our disposal, and could look at InSAR maps to search for surface deformation, do precise locations to better identify seismicity patterns, and rush out with portable instruments for a closer look.

But for a small swarm in a relatively sparsely populated region, we'll probably just do the usual, keep an eye on it.