iMUSH: Adventures in the Field

iMUSH: Adventures in the Field

As of the 1st of September, the iMUSH project (Imaging Magma Under St. Helens), a seismic experiment that used 70 temporary seismometers to collect seismic data around Mt. St. Helens, is finished and all stations have been removed. iMUSH has been a great way for perpetually desk-bound seismology graduate students to get outside, wrangle with nature and get some hands-on experience working with the instruments that collect the data we use in our research. It’s also been a unique opportunity to come up with creative solutions to the unforeseen obstacles we encounter along the way.

Our job as volunteers during the installation was to survey sites, install seismometers and recording equipment, and the power sources to keep them up and running (solar panels and batteries).  Servicing required less lugging around heavy equipment and a lot more driving from site to site, collecting data cards and repairing damage acquired over the winter months or by the local wildlife.

I’ve been lucky enough to participate in the entire process from install to removal, periodically berating myself when having to deal with the consequences of my own overzealous burying of cables and liberal use of zip ties. Our experiences over the last couple of years have ranged from rewarding (amazing views of Mt. St. Helens, Mt. Adams, and Mt. Rainier) to frustrating (road washouts, flat tires, and broken side mirrors). But the worst sites make the best stories, so I would like to share a couple of my more comical experiences during the removal process.

On the first day of the removal, Ian and I made our way to a site located in a clear cut on Weyerhauser land.  The site was close to the road and I had been there before, so I figured removing the site would be pretty easy.  Then we encountered our first obstacle.  Wasps.  Lots of wasps.  And they had decided that the back of a solar panel was the perfect place to build a nest. 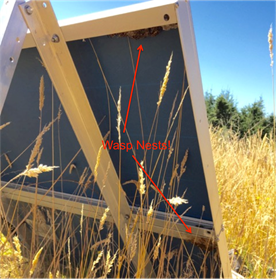 So, Ian bravely decided to try and remove the nests with a shovel, but not before suiting up in appropriate wasp-wrangling attire, which involved lots of duct tape and a plastic garbage bag. 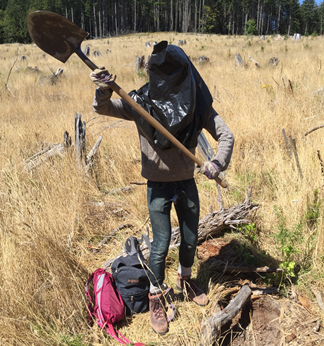 He then proceeded to slowly sneak up to the solar panel and gently placed the shovel beneath the first nest.  He was doing great, but right as the nest fell into the shovel he lost his nerve and dropped it.  Now, instead of a nest of sleepy wasps, we had a swarm of angry wasps right under the solar panel.  So we decided to leave and complete the next site and return later with a can of Raid.

We returned to the site appropriately armed later in the afternoon and were able to spray the 2 nests. Unfortunately, Raid only works when the wasps are in the nest and there were still a quite a few hanging around.  I should add that we were feeling extra cautious, since Ian had just been stung twice while trying to unlock the gate to the Weyerhauser property (apparently those make great nesting places too). So we decided to tie a rope to the panels and drag it away from the swarm.  This proved successful and we were able to disassemble the solar panels after dragging them about 20 feet from the original spot.  The whole process took about 4 hours.  So much for an easy site removal.

The third day of the site removal, Carl and I made our way to a site in the Gifford Pinchot National Forest.  When we turned off the main road you could barely see the dirt road we were to take to the site, it was so overgrown with saplings.  So we put the car in 4-wheel drive, folded in the side mirrors, and proceeded slowly down the track.  About halfway to the site we encounter a fallen tree. 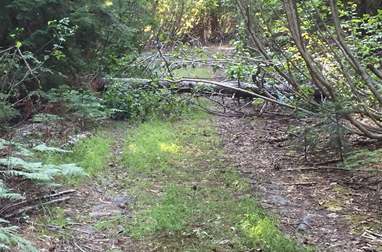 There is no way we were driving over that.  We then had to decide whether we would park the car and hike about a mile to the site or cut up the tree.  He and I both agreed that we would rather cut down a tree than hike back and forth several times carrying batteries, solar panels, and other awkward heavy things.  So, Carl and I set to chopping up the tree with hedge clippers, a handsaw, and an ax.  We sawed and hacked at the tree for about an hour (both saw and ax were pretty dull).  We managed to get one end free but the other wouldn’t budge. 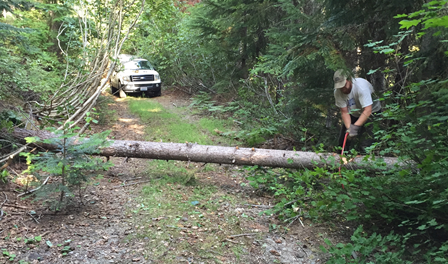 We tried jumping up and down on it for a while and then eventually realized we had one big tool that we hadn’t tried yet: 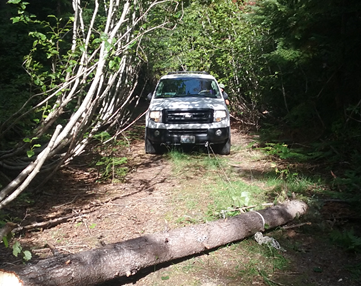 Finally! We were free to continue on our way.  And then 50 feet down the road… 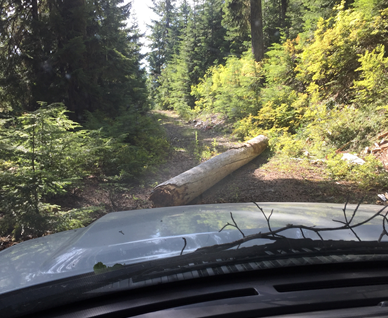 *Sigh* well, at least we didn’t need the ax for that one.

Hope you enjoyed reading about our adventures in the field!  If you would like to learn more about the iMUSH project, click this link the iMUSH webpage http://imush.org/.