The event on Saturday night (well, early Sunday morning), and its half dozen aftershocks big enough to locate, were typical of Seattle region deep seismicity.  The events broke the ground 20-25 km deep, in a region that has had similar small earthquakes before during the 40 years that the PNSN has been running. 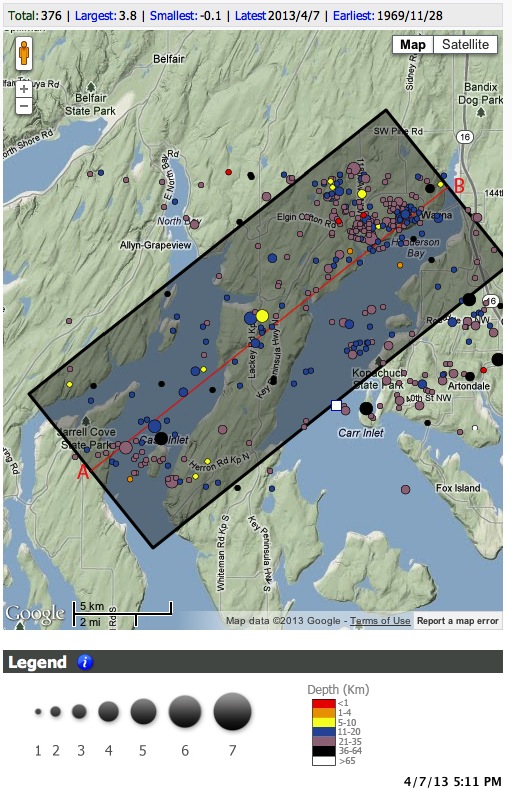 The earthquakes last night are the blue ones in a cluster in the middle of the map.  More details about last night's activity may be seen on our usual seismicity page.  A few have been in the area previously, and many have been nearby.

The A-B cross section through the seismicity (all the earthquake hypocenters projected at right angles onto the red A-B line, then their depth plotted vs their A-B position) is shown below, and the depth of the earthquakes is typical.  Last night's events are among the cluster of about 10 events around the one marked by the mainshock with a green circle, in the middle of plot.  The events have several km uncertainty in their location, so we cannot interpret the pattern observed beyond that the events all locate quite close together.

In 1972, another M3.4 event was observed in the area (the nearby green circle shallower in the cross-section, at 5km depth, and the yellow symbol on the map).  You can make similar maps, too, with the Custom Search function on our web page.

The events last night and in 1972 are in the neighborhood of the Tacoma fault, but whether the fault extends that deep and locates precisely there are not clear.

The complexity of interpreting the fault geology may be judged by glancing at the study at this link.  One idea of the surface traces of the faults in the region may be seen in this 2008 50 Mbyte map.

The potential for activity on the Tacoma Fault is serious, as pointed out by this review, but an M3.5 does not indicate much danger.  As usual, we seismologists just watch a little more carefully following such earthquakes, but consider that nothing too alarming is happening.