The New Yorker article, “The Really Big One,” did more than inform people around the country of the threat of the large, impending earthquake that will happen off the coast of Oregon and Washington.  It brought Pacific Northwest earthquake hazards to the attention of the White House.  On Tuesday, February 2, President Obama’s Science Adviser, John Holdren, invited earthquake scientists and other stakeholders to the first ever Earthquake Resilience Summit. One of the main goals of the meeting was to discuss the potential for fully funding a west coast earthquake early warning system.

The idea of earthquake early warning is not new.  Japan’s earthquake early warning system launched in 2007 and provided alerts during the 2011 M9.0 earthquake off the coast of Tohoku. The United States Geological Survey has been working on a west coast early warning system since 2006.  The system, ShakeAlert, began sending test alerts to selected California users in 2012.   The goal is for ShakeAlert to be developed into a system that will provide earthquake warnings to companies and residents along the entire west coast.  One of the main obstacles to the implementation of the system is that it costs money.  The estimated cost of upkeep is ~$16 million per year.

What exactly is an earthquake early warning?  It is not an earthquake prediction—a warning can only be issued once an earthquake has already started.  An earthquake produces two types of seismic waves that travel through the earth.  The less damaging P waves, which compress the earth like an accordion, arrive at earthquake sensors, or seismometers, first.  After four seismometers pick up the P waves, the system registers that an earthquake occurred and issues an alert that the more damaging S waves are coming.  Depending on your distance from the earthquake’s starting location, you could get anywhere from a few seconds to five minutes of warning.

To get alerts out as quickly as possible the earthquake early warning system needs two things: a wide distribution of seismometers and short data processing times.  With a wide distribution of evenly spaced sensors, there will be a higher chance that four seismometers will be close to any earthquake source.  In addition, it takes time for data to be collected by the sensor, transmitted to the computer at the PNSN, and processed.  For faster alerts, we want to minimize this time, or system latency.

The figure below shows the warning times (for an ideal network) that Seattle (left) and Portland (right) would get for any earthquake at 15 km depth.  To find the warning time of an earthquake, look at the contour line closest to the earthquake’s location. For example, if an earthquake occurred at the location of the yellow star (map view location of the 2011 Nisqually earthquake) Seattle and Portland would get 10 and 40 seconds of warning respectively.  The red triangles indicate the locations of current PNSN seismometers. 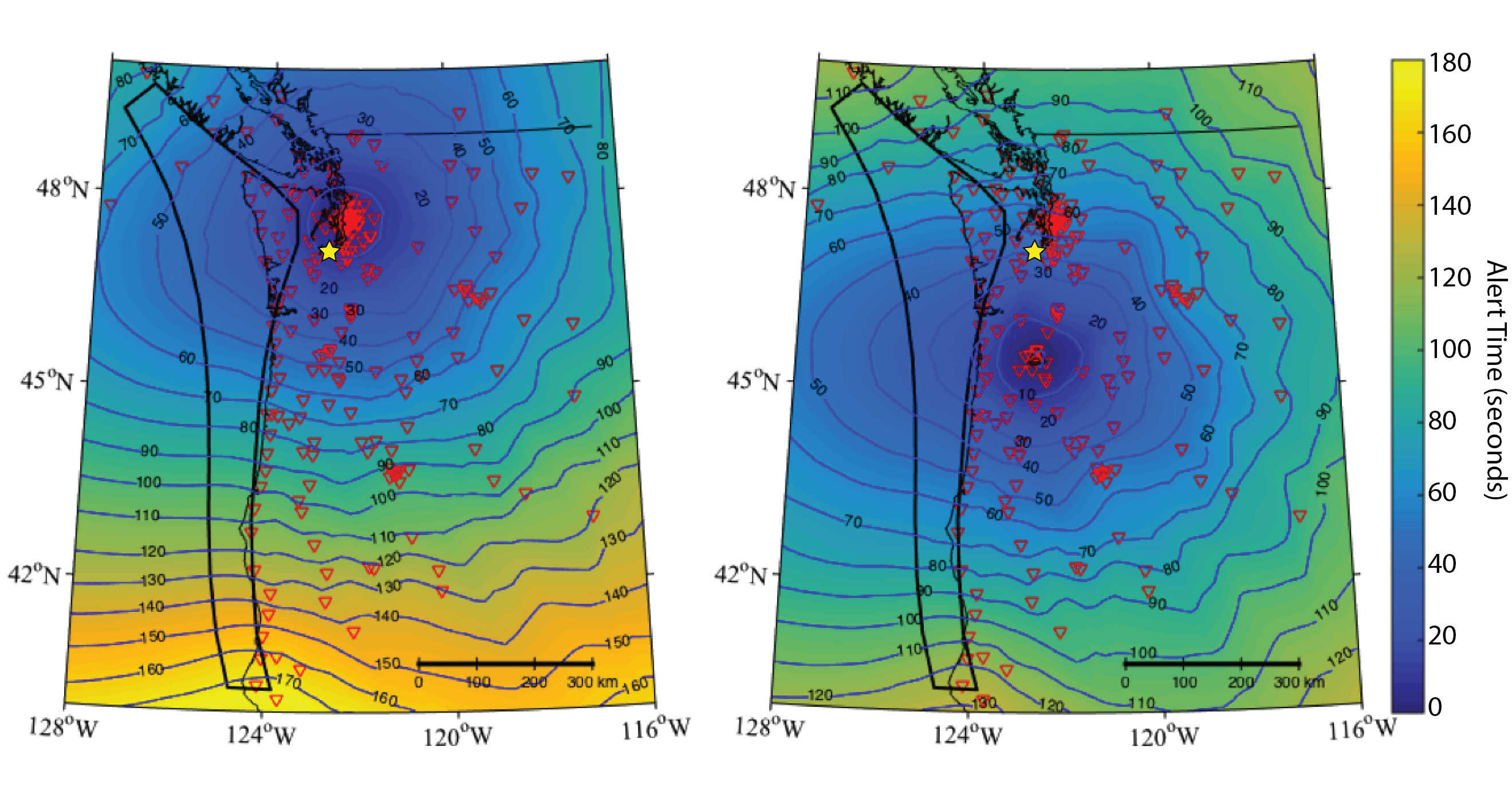 To create the ideal network configuration used to calculate the times in the above figure, we need to both improve and maintain the current network of earthquake sensors.  This will require additional funding.  Luckily, after the Earthquake Resilience Summit, the White House, state and local governments, and many private stakeholders have committed both time and money to improving earthquake preparedness.  This includes a $3.6 million grant from the Gordon and Betty Moore Foundation to advance the ShakeAlert system and additional pledges from many Pacific Northwest businesses.

What could you do with 10 seconds of warning? Though it doesn’t seem like much, 10 seconds is enough to drop, cover, and hold, pull over your car, or turn off your stove. Other benefits of a warning system are numerous; doctors could stop operating on patients, businesses could stop critical operations, and transit systems such as the BART in San Francisco could brake their trains.  So, stay alert.  With increased funding, the implementation of a west coast earthquake early warning system is on the horizon.