Our role model for a science blog, Cliff Mass's fascinating Weather Blog, suggests slushmageddon for this week.  Snow has been suggested to set off earthquakes, as well as traffic jams, discomfort, and discontent with city emergency managers. 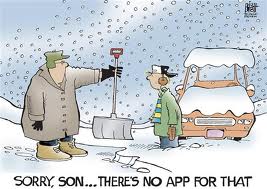 There is a real possible way for snow to trigger earthquakes - the weight of the snowfall changes the stresses in the ground.  Basically, if a steep enough pile of material is formed, the pile will spread laterally, just as happens when one is too ambitious with a tall sand castle.  Of course, adding snow to our mountains only "steepens the slope" a tiny amount, but the principal is the same.

We think the ground already is loaded with about as much stress as it can bear without rupturing in an earthquake, so a tiny amount more might have an effect.  The same argument can be made for rain, wind, ocean currents, atmospheric pressure variations, erosion, and even adding buildings to a patch of ground like downtown.

A heavy snowfall could be 30 cm (about a foot), and snow has about 10-20% water, so that is considerable weight dropped on the land.  Heavy to us, at least, although not heavy compared to the massive rock underneath.  We don't know exactly how close the ground is to spawning an earthquake before the snowfall, so the best way to tell the effect is to see whether snow has caused earthquakes in the past around the world.

Several reputable studies have seen an effect.  In one by Kosuke Heki, also described here, the rate of big earthquakes over the last 1500 years in Japan were three times higher during the six months when the snowload favored fault movement than when it didn't.  The snow in the studied area was deep, equal to a meter thickness of water.

The figure shows snow depth through a year at three places, and a map of maximum snow depth.

If we believe this study, snow can affect the rate of earthquakes.  However, the effect is small.  In the study, 10 to 20 times as much weight is laid down as is likely in our local Slushmageddom, and it persists for the winter, stressing the ground for months.  Also, even in the Japanese winter in the mountains, the danger is not high - a winter rate three times the summer rate just means 50% higher risk than average in the winter and 50% lower risk than average in the summer.

So yes, a big snowstorm can raise the expected rate of earthquakes, but only ever so slightly, and far, far too little to warrant action.