Repeating Earthquakes on Mount Rainier - are glaciers the culprit?

Repeating Earthquakes on Mount Rainier - are glaciers the culprit?

Though Mount Rainier looks serene and quiet viewed on a nice day the Visitors Center, it is actually a very active and noisy place. Regular tectonic earthquakes occur several times a month, but glacier quakes, avalanches, wind, landslides, icefalls and rowdy mountaineers also shake the ground and are picked up by our seismometers. There is an astounding amount of seismic activity on the seismic stations high on the mountain any day of the year (for an example, view Webicorders of RCS, STAR or RCM on PNSN site). The image below shows a sampling of what these different signals look like (click to zoom in). The left side of the figure shows the seismograms, the right side shows the frequency content of each seismogram. 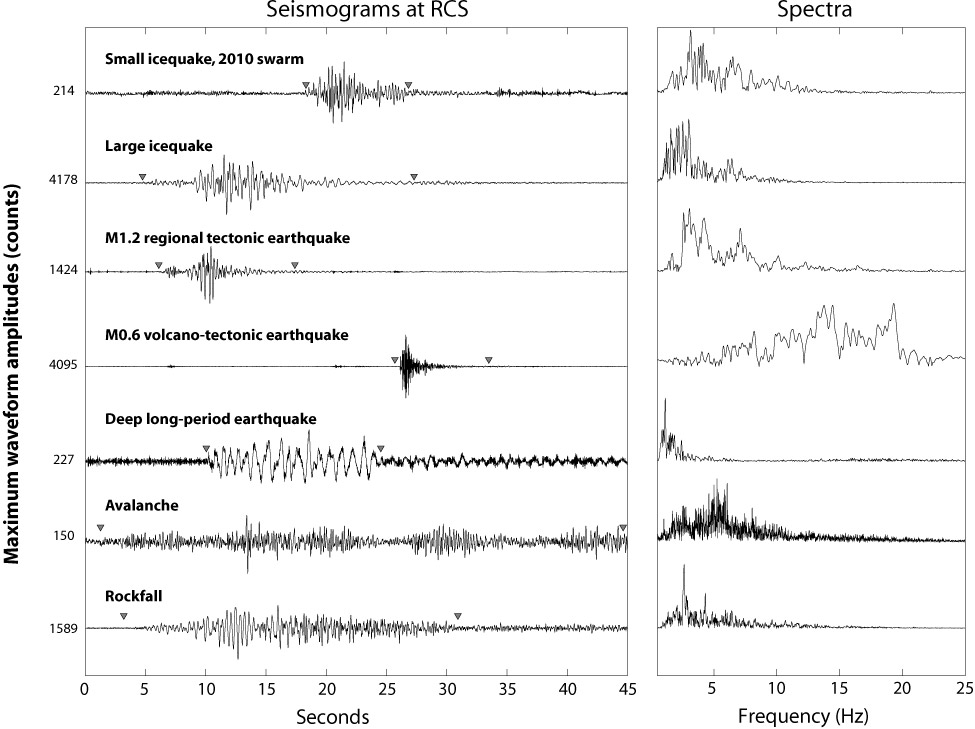 Over the past few years, however, a new type of seismic signal has emerged: sequences of repeating earthquakes. One of these sequences started a few days ago on December 28th and continues up to the present. These earthquakes are tiny, smaller than Magnitude 0. Earthquakes this small are usually ignored because they are too small to locate or do anything useful with. What makes these quakes special is that the same earthquake occurs over and over again, up to thousands of times. The plot below is a timeline showing the occurrence of the repeating earthquakes in the current sequence. Each horizontal line represents one set of earthquakes with near-identical seismograms. Each circle represents when an earthquake occurred. The number at right indicates the number of earthquakes in each set.

When more than one earthquake have nearly identical seismograms, it means that the source is the same for both and their location remains stable over time. Though individual earthquakes are much too small to locate, when we align the seismograms of hundreds of them and add them together, the noise is canceled out, making the seismograms clear enough to get a location. The locations of the three largest sets of events in the current sequence are shown on the Google Earth image below. The blue triangles are PNSN seismic stations, Paradise is at the bottom of the image (click to enlarge):

The current sequence and those in the past have shown correlation with passing storm systems, spring melting, fall snowfall, and other weather transitions throughout the year. This points to changes in glacier behavior as a likely culprit. Glacier behavior can be modulated by the weather and they can also make a lot of noise.  Glaciers actually generate most of the seismicity on the mountain. Repeating earthquakes have been observed on other glaciers around the world so it is not a revolutionary idea. However, as any Western Washington resident will tell you, there are nearly always weird weather transitions going on, so the correlation weather with these earthquake sequences could be purely coincidental. There are many other arguments against a neat and tidy classification as a glacial source. In addition, hydrothermal activity can generate repeating earthquakes, as can the movement of magma prior to and during eruptions. The possibility of a hydrothermal or magmatic source cannot yet be completely eliminated in this case. The good news is that these sequences have been happening on and off for the last two years as well as a few times in the 1990's and there hasn't been any volcanic activity, and there are no other signs that the volcano in our back yard is rewakening.

In the meantime, we continue to monitor the activity, hypothesize about the source, and try to test these hypotheses with our limited resources. The rugged conditions on Mount Rainier makes testing difficult. Last spring we planned a field campaign to deploy instruments to test the glacial source hypothesis. We carried heavy instruments and batteries on the backs of graduate students high up on the mountain and deployed them. But Mount Rainier put up a fight, giving us an extra month of bad weather, blowing a seismometer off Disappointment Cleaver with a freak gust of wind, and nearly hitting another expensive instrument with a big landslide only for it to be eaten by a crevasse later that month before we could safely retrieve it. Round 1 goes to Rainier.