January nights are long in the Pacific Northwest and most of the thousands of residents of the Cascadia Coast had gone to sleep by 9:00 PM on January 26, 1700 before the the events began that would change their lives forever. This was the night of the last great Cascadia earthquake that rocked the ground for 5 minutes or more beginning at about 9:00 PM. Camps and villages near the where the earthquake started would have awakened to the vibrations of the "P'' or primary compressive waves followed 10s of seconds later by truly strong shaking from the "S" (secondary or shear) waves. Tribes more distant from the onset would experience the ground shaking becoming more violent over time as the Cascadia fault unzipped in their direction. Unknown to the people who scrambled to help their children and neighbors, a column of water, having been thrust up by the sea floor in the earthquake had collapsed into a tsunami wave train now headed for the coast. 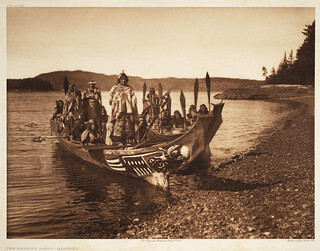 No one knows how many lives were lost that night, certainly hundreds, possibly thousands. Over one hundred died in Japan from the "orphan tsunami" that eventually hit their coast with out warning about 9.5 hours later. The stories of the survivors, passed generation to generation through oral traditions, remain as powerful and relevant reminders to us who await the next great Cascadia earthquake.

Ruth Ludwin, a research seismologist, joined the staff of the PNSN in the 1980s. Ruth began reading and exploring archives for Native American stories that seemed to reference earthquakes, ground failure, and floods first from personal interest and later with grant support. She produced a number of important papers providing references to original documents and her insights into possible layers of meaning contained in these stories. We have reorganized and adapted Ruth's original web pages on this subject and have published this material in "Native American Stories" under the Outreach and Discovery section of the PNSN Web site.