Tremor detection is an evolving science without any established standards. As time goes on new techniques incrementally improve our ability to monitor the phenomenon. The underlying algorithm detecting tremor at the PNSN was last updated in February 2018. For the major changes that took place then see the description about the updated tremor processing system.  But like any completely automated process, it was not fool-proof, and sometimes erroneous results can sneak in, usually through bad input data (think: misbehaving seismic station or telemetry). Problems began surfacing in June of last year with many bogus tremor detections in southern Washington that were the result of a few misbehaving stations in that region that gave the detection algorithm fits. This prompted us to go back to the drawing board and figure out how to automatically exclude this kind of noise so false detections don’t make it into the catalog (as much). As a result, a few key changes were made to the underlying algorithm to improve accuracy and reliability.
The search grid was changed to actually match the curvature of the subduction zone (seen below) 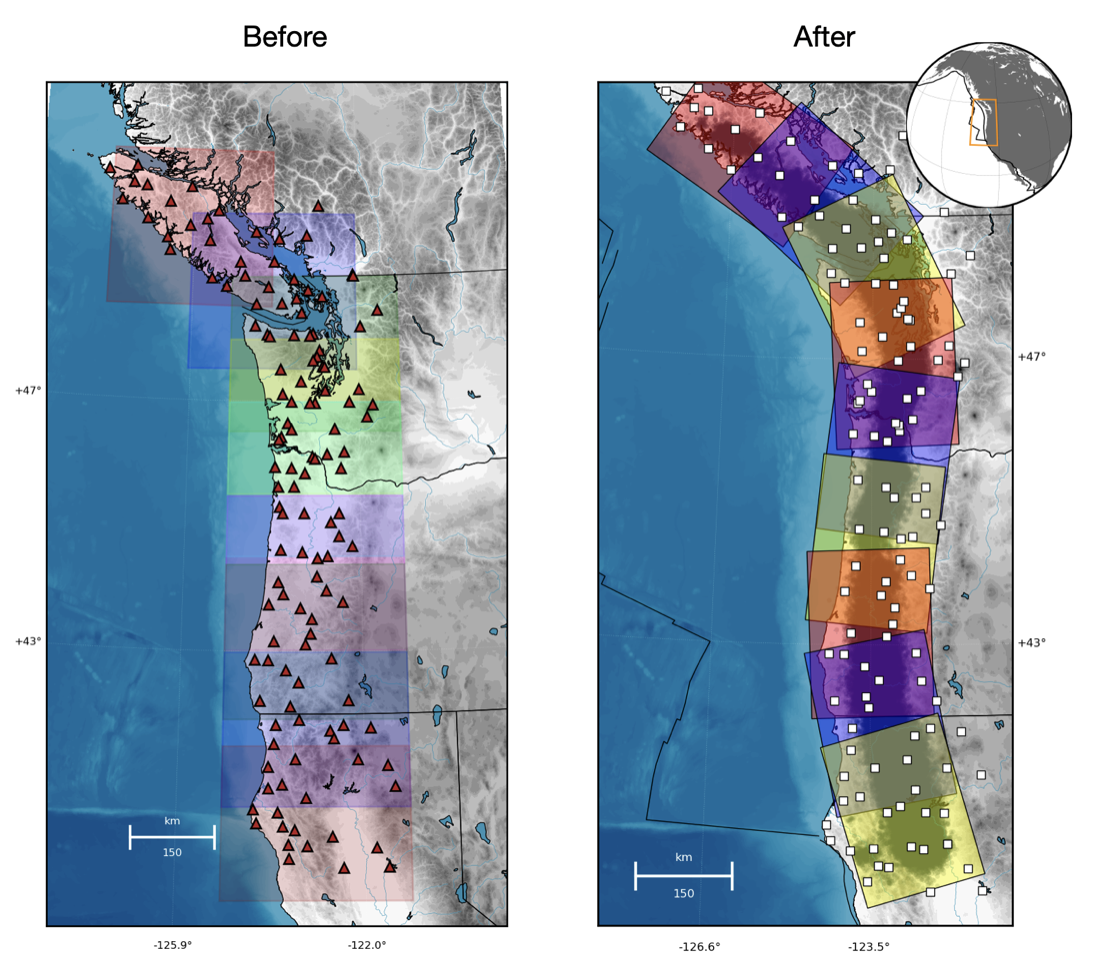 Left: Overlapping polygons represent grids previously in the original tremor search algorithm. Red triangles are stations used. Right: Overlapping polygons represent new grids used in the tremor search algorithm. White squares are stations used, and the faint blue dots underneath the polygons show the tremor catalog.
Some filtering and pre-processing parameters were changed to reduce false positives. More stations from California were added (seen map above) to extend the footprint and capture some tremor that was previously missed.
The past 4 years of data (starting in January, 2017) were reprocessed with these changes. The result is a reduction in false events in southern Washington (seen in the blue ovals below), and an increase in tremor detections in northern California (examples in green ovals below). The changes also result in a lot less scatter, at least partially because very weak tremor with poorly defined timing and thus larger errors in location are now excluded from the catalog. 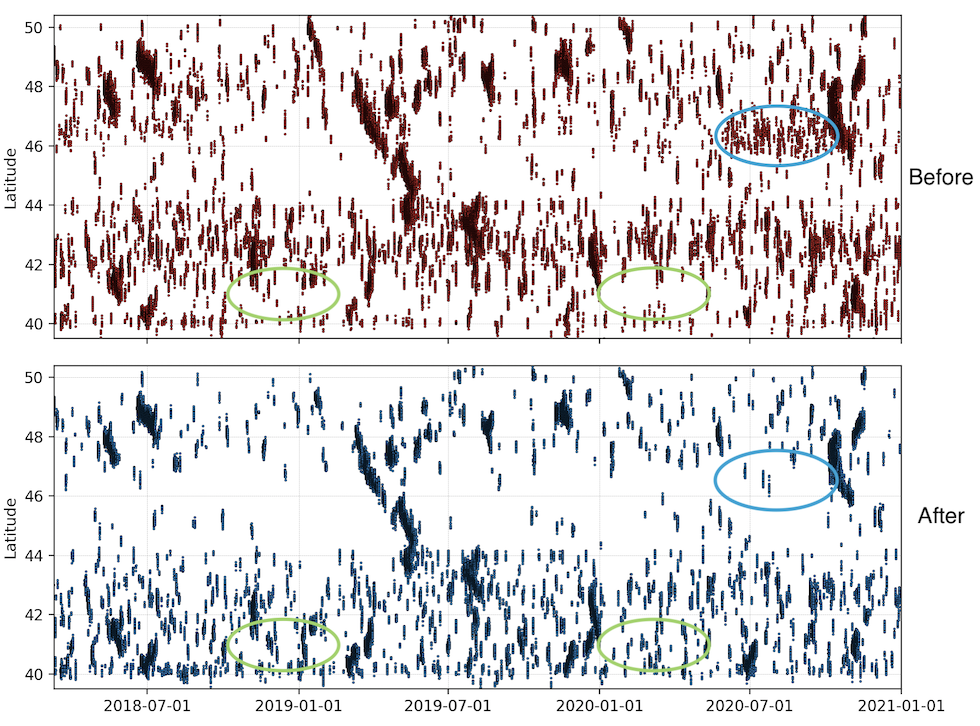 Latitude vs time plot of tremor before (top) and after (bottom) the recent algorithm changes. The blue oval highlights erroneous detections that disappear in the new catalog, and the green ovals highlight new tremor detected in the new catalog.
Ultimately these changes result in an improved tremor catalog product. But it also means that the data plotted on the website will change. The old catalog was replaced with the new one today, March 10, 2021. The changes only apply going back to January 1, 2017.  Changes in the reported magnitudes have also been made since these values are being calculated directly by the tremor detection system and reported directly in the catalog rather than as a part of the display system. The new processing algorithm will also be implemented daily going forward.  As demonstrated in the figure above, the catalog will change. Some previous detections will go away, and some new ones will appear. It might be disappointing to lose some of your favorite tremor epicenters, but we feel this change is necessary to more accurately reflect both past and current tremor activity.
However, keep in mind that things can go wrong (and probably will) with any system so never trust any specific tremor location alone.  It is general patterns and their changes that we are mostly interested in and we hope that these latest improvements will let us see those changes more reliably.

I must add a bit more explaination to Aaron's above note since some of the problems needing correction in the new system were, at least, partially my fault.  Traditionally I am the one who keeps an eye on the day-to-day operations of the tremor system and reconfigures it as needed due to changes in the sources for seismic data.  I have been too lazy over the past few years to always make sure that the best available set of stations was being used.  Particularly for data from networks outside the PNSN it takes vigilance to keep track of when stations die or change character and when new stations are added. The previous versions of the tremor system depended on data we received at the PNSN from our stations and from neighboring networks such as the Northern California Seismic Network.  It turns out I was often not aware when changes were made by other networks and so we were loosing access to data.  To make the configuration issue easier on me Aaron has made the new version of his code capable of directly extracting data from any and all relevant data centers rather than it needing to be first put into our data servers at the PNSN.  Thus, it is now much easier to keep up with configuring the best combination of stations to use for detecting tremor.  Thank you, Aaron.