The CAscadia Seismic Imaging Experiment 2021 (CASIE21): All Aboard the R/V Marcus G. Langseth!

The CAscadia Seismic Imaging Experiment 2021 (CASIE21): All Aboard the R/V Marcus G. Langseth! 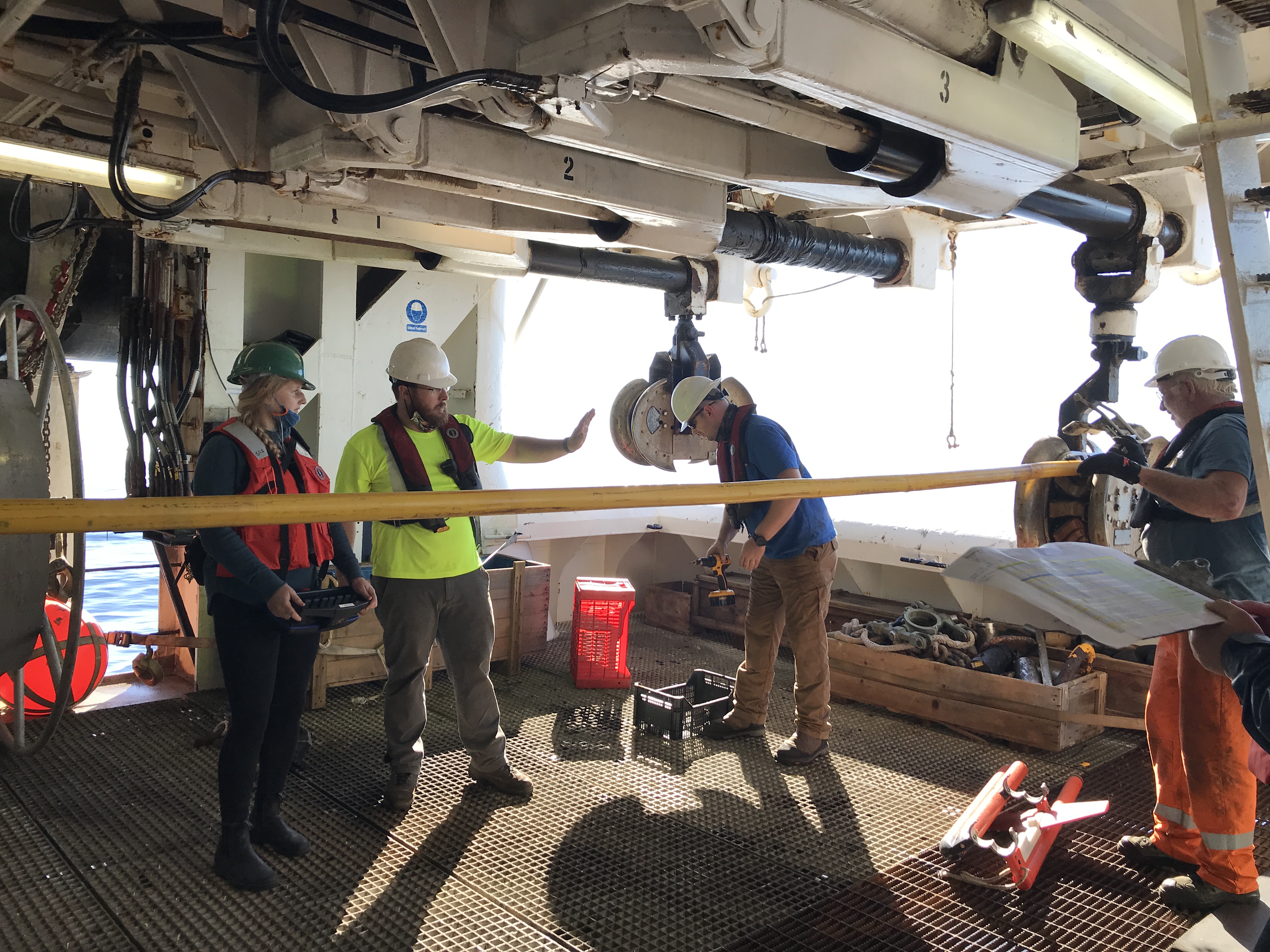 This past June, I hopped aboard Columbia University’s R/V Marcus G. Langseth to participate in the CAscadia Seismic Imaging Experiment 2021 (CASIE21), a 41-day research cruise funded by the National Science Foundation. Our mission: to image the Cascadia Subduction Zone, where the Juan de Fuca plate collides with and dives beneath the North American plate offshore the Pacific Northwest coast of North America.

This collision of tectonic plates results in megathrust earthquakes, the largest earthquakes in the world, capable of producing damaging tsunamis like those of the 2004 Mw 9.1 Sumatra and 2011 Mw 9.1 Japan megathrust earthquakes. The seismic images of the Cascadia subduction zone collected by the CASIE21 cruise will allow us to "see" deep beneath the floor of the Pacific Ocean to observe the structures and physical properties of the megathrust fault zone, accretionary wedge, and downgoing Juan de Fuca plate.

My PhD research will be focused on splay faults, which are steeply-dipping thrust faults that branch off the megathrust fault and cut through the accretionary wedge up to the seafloor. It is important to understand splay faulting in Cascadia because if these faults are activated in future megathrust earthquakes, they can significantly increase tsunami size and, therefore, should be considered in tsunami hazard assessments.

Overall, scientific studies using the new seismic images collected by the CASIE21 cruise will allow us to develop a better understanding of earthquake and tsunami hazards at the Cascadia subduction zone. 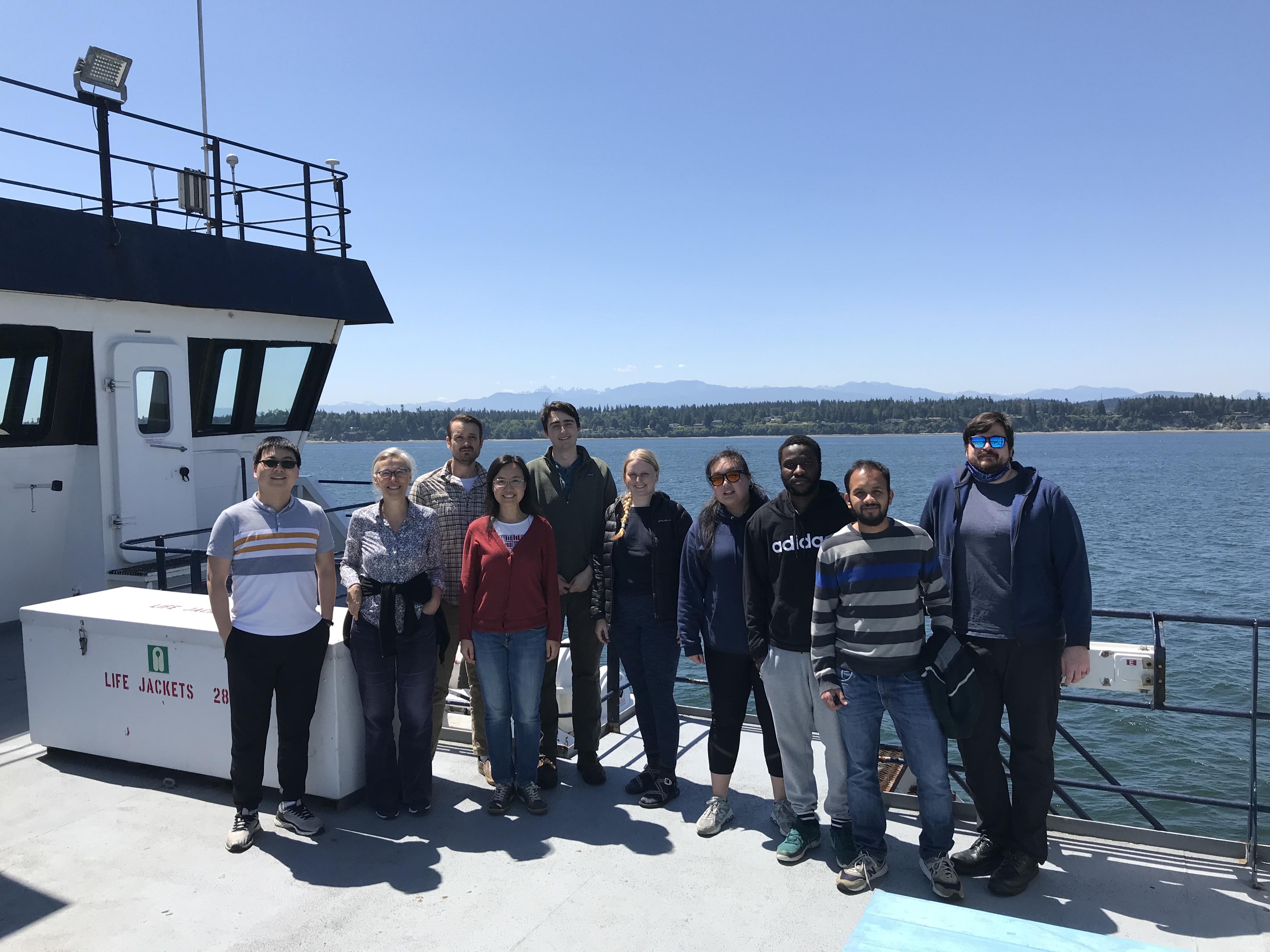 During my time on board the Langseth, I had the opportunity to work with an incredible team of scientists from research institutions across the country, led by chief scientist Suzanne Carbotte of Columbia University’s Lamont-Doherty Earth Observatory (LDEO) and co-chief scientists Brian Boston of LDEO and Shuoshuo Han of the University of Texas, Austin Institute for Geophysics. 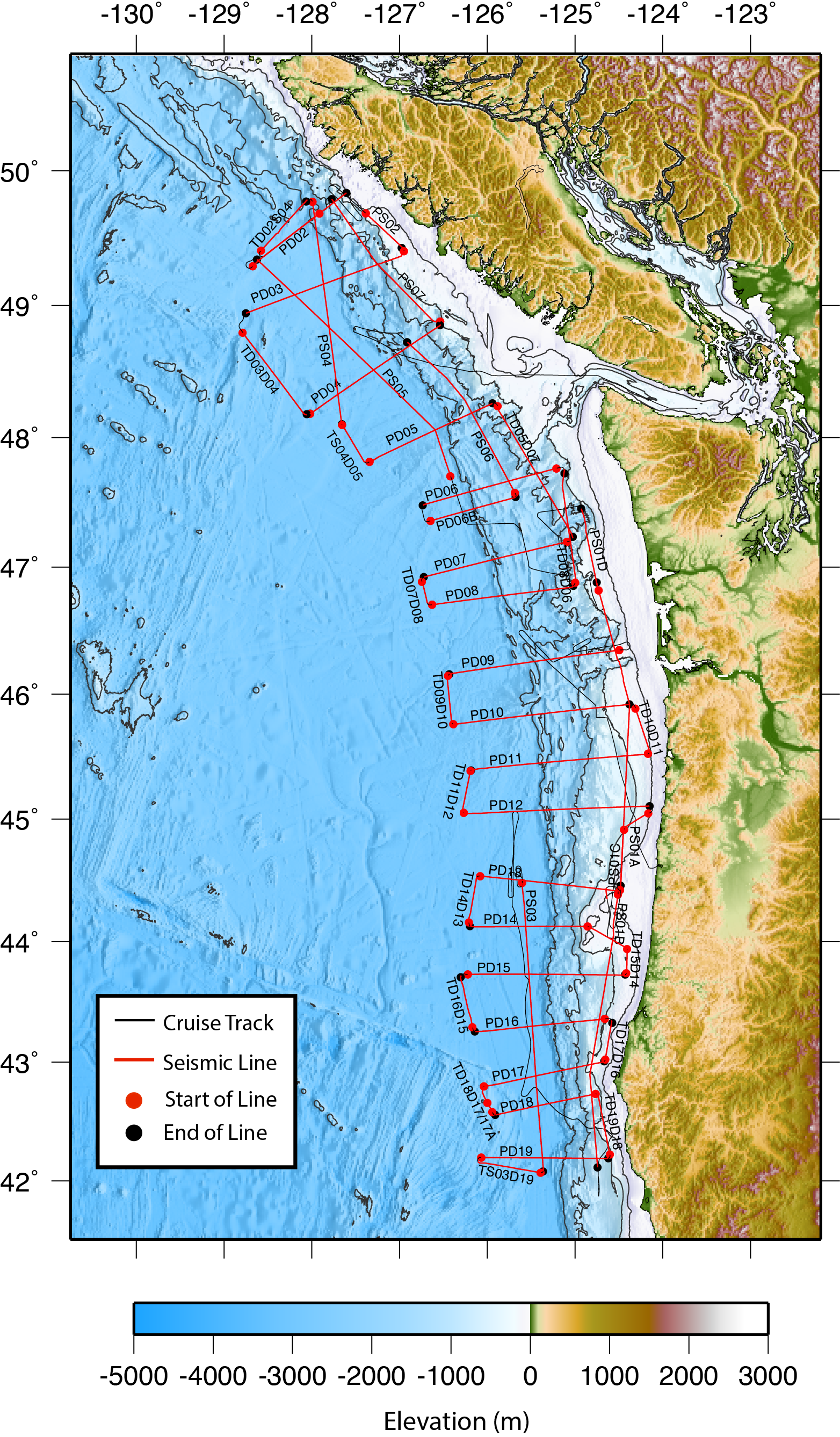 As a part of the CASIE21 science team, I assisted in the collection of seismic and seafloor bathymetry data along 18 dip lines and 7 strike lines over the Cascadia subduction zone from southern Oregon to Vancouver Island. This involved deploying our 15-km-long steamer cable of 1,200 hydrophones which recorded the seismic waves created using our array of 36 air guns after they bounced off layers of sediment and rock in the subsurface. 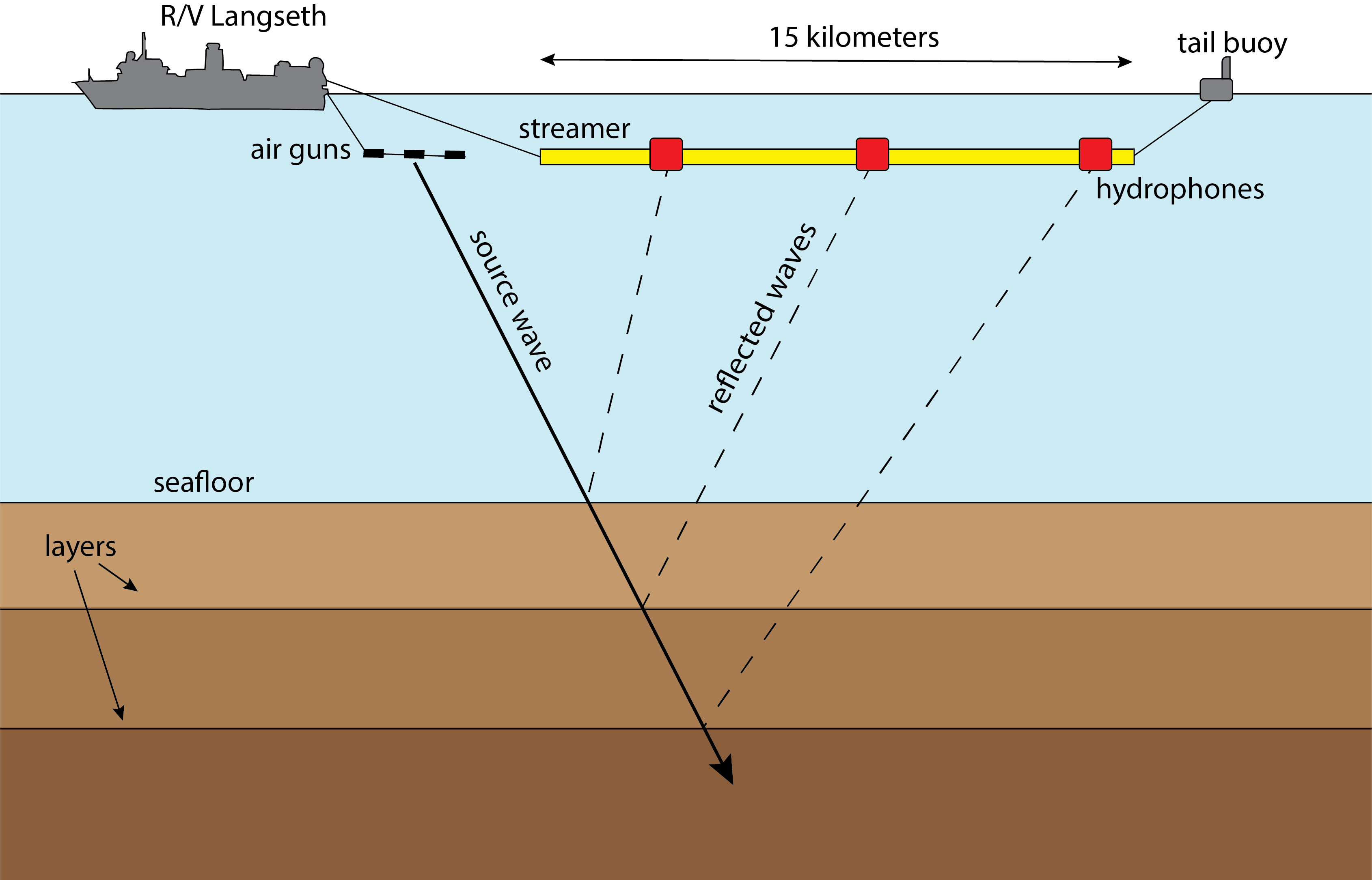 Once our instruments were deployed, I spent my much of my time on-duty in the Langseth’s science lab monitoring and processing the incoming seismic data and building the CASIE21 website and blog. In my off-duty time, I often went up the Langseth’s observation tower to hang out with the Protected Species Observers (PSOs) who were tasked with monitoring for protected species such as whales, dolphins, sea turtles, and birds. If the PSOs detected a nearby protected marine animal, we shut down our air guns and waited for the animals to move a safe distance away. You can learn more about this important work on our blog post. 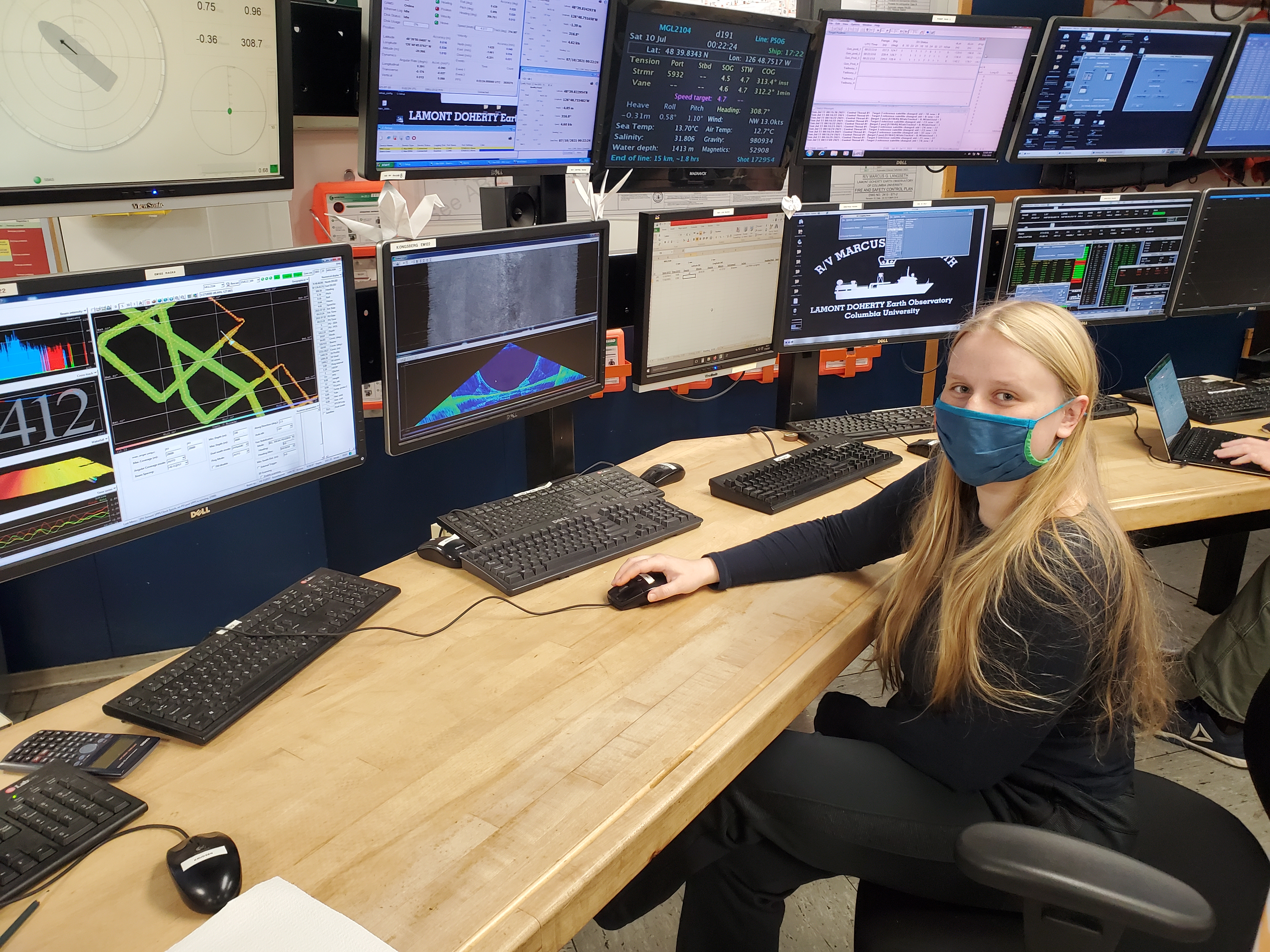 With millions of people living along the Pacific Northwest coast, it is vital to understand future megathrust earthquakes and tsunamis at the Cascadia subduction zone. As the first modern, region-scale marine seismic imaging survey of the Cascadia subduction zone, the CASIE21 research cruise provides a foundational dataset for future studies of earthquakes and tsunamis in the region. I am grateful for my experience onboard the Langseth and look forward to working on this new dataset and sharing the results with the community!