On Monday morning (April 10) the Pacific Northwest Seismic Network (PNSN) was buzzing with activity, but not seismic activity. Network employees were sporting PNSN t-shirts and there were numerous outside officials wearing splashes of University of Washington purple. Reporters from The Seattle Times, KIRO News, the UW Office of News and Information, and more where crowded into the small lab room, surrounded by recording equipment. The lab room itself, with its old school, drum seismograms, was accessorized with extra monitors, a podium, and a clean, purple tablecloth covering the long table, normally cluttered with various earthquake demonstrations.

What was the occasion? The Seismic Network hosted a press conference to announce the rollout of a new version of the earthquake early warning (EEW) system, ShakeAlert, which is now fully integrated across the entire West Coast of the United States. Speakers included the Dean of the UW College of the Environment, Lisa Graumlich, Dave Applegate and Doug Given from the United States Geological Survey, U.S. Representative Derek Kilmer, Washington State Seismologist, John Vidale, Maximilian Dixon from the Washington State Emergency Management Division, and Dan Ervin, chair of RH2 Engineering. 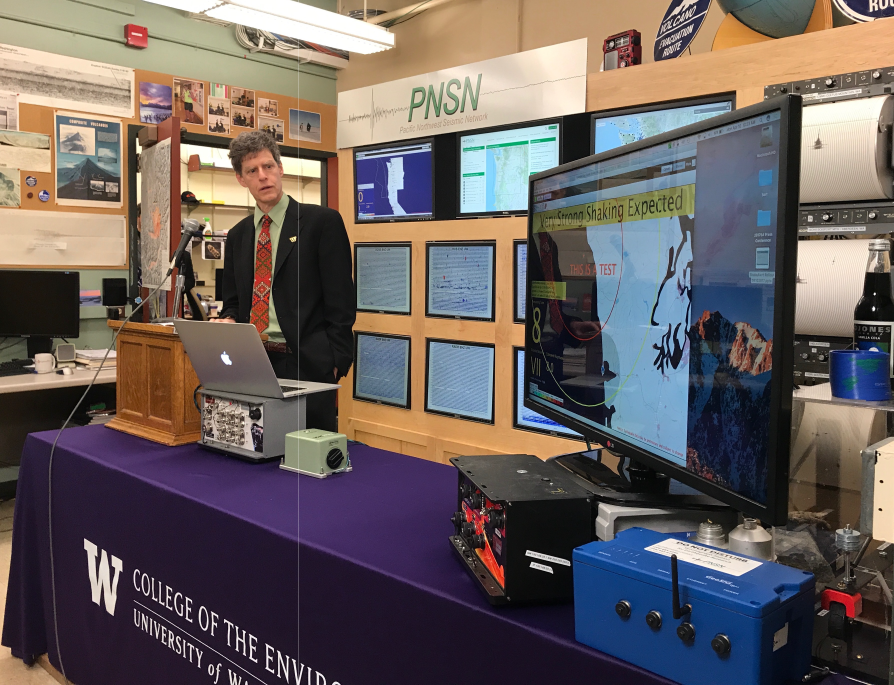 Previously the EEW system in the Pacific Northwest was detecting earthquakes and issuing warnings to a beta test group, but the warnings were not being utilized. Now, while the system is not yet ready to send alerts to the public, warnings issued to pilot users will be used to test earthquake response systems. Users include RH2 Engineering in Bothell, WA, which will use the alerts to secure municipal water and sewer systems, and the Eugene Water and Electricity Board in Oregon, where alerts will be used to lower canal water levels above a residential area and turn off turbines at a power plant.

While the release of the updated system marks a large step forward for West Coast earthquake early warning, there is still more work to be done to allow the system to reach its full potential. Both Applegate and Given emphasized that the system only has about half the funding needed in terms of annual support. The development of the system has so far been funded by a combination of public and private grants, including support from the Gordon and Betty Moore Foundation, Amazon Catalyst, and Puget Sound Energy.

Kilmer believes that Monday’s press conference highlights the value of the EEW system. He hopes that Congress will realize the benefits of having an EEW system across the West Coast and respond. Additional funding will go towards installing new earthquake-recording stations, improving telecommunications between stations and network computers, continued testing of the system, and hiring new staff.

Currently, the system only includes 700 of the 1700 stations needed to cover all the hazards and populations on the West Coast. While the EEW system can move forward with the existing stations, earthquakes in some places, for example parts of Eastern Washington, will be detected less quickly than with the full station set or not at all. Unfortunately, installing new stations is not like “planting flowers” reported Given. Not only do new stations cost money, getting permits to put stations on private, state, and federally owned land is time consuming.

Another critical component needed to expand the system to be able to issue public alerts is education. Receiving a warning on your cellphone is not useful unless you know what the alert means and how to respond. While there is no funding for education yet, reported Dixon, the ultimate goal of EEW education is for the public to be able to react to warnings with a practiced, automatic response.

Despite the fact that a fully-fledged West Coast EEW system still requires more time, work, and funding, all the press conference speakers emphasized the utility of having earthquake warnings.

“(The earthquake risk on the West Coast) cannot be overstated,” stressed Given.

The EEW system will save lives, preserve infrastructure, and mitigate the loss of productivity post-quake. The release of the West Coast integrated system marks a milestone in earthquake preparedness.

Other articles about the West Coast early warning system: