It just goes to show you that an old, retired seismologist should NOT make geodetic interpretations based on GPS data... when he doesn't have access to or maybe understand the data sources.  My previous post asserted that there were no observable displacements associated with the recent ongoing tremor in the northern and southern Puget Sound area.  These "observations" were based on my using plots from two US Geological Survey systems that I did not properly interpret.  Dr. Heidi Houston (previously of the UW but now at USC) pointed out to me that the most recent data shown in my graphics only went up through mid-March.  I had assumed that they went through the end of March.  I also drew inaccurate conclusions based on my limited understanding of data provided by the USGS Earthquake Hazards GPS monitoring page. At the risk of sticking my neck out again I am now going to say that it turns out that there are observable displacements in the GPS data.

The operators at Central Washington University for the PANGA geodetic network provided plots yesterday that I (even a retired seismologist) can interpret as showing typical ETS displacements (I hope I am interpreting them correctly). I still see no significant GPS displacements in the northern Puget Sound (north of Seattle), but there are small displacements near Seattle and significant ones in southern Puget Sound all the way south to the latitude of Mount St. Helens.  I show two sections of plots illustrating this below, the first from central Puget Sound, the second from farther south.

Central Puget Sound Stations. Note that in the above plot one can easily see the ETS-related displacements of May, 2018 particularly on stations, SSHO, KTBW, ELSR and P419.  For the most recent times (up through early Apr. 2019) displacements are also seen, particularly on SMAI and OYLR and perhaps a small one on KTBW. All of these stations are in the Seattle area.  Stations to the north of these show no to very little displacement. Even here the displacement signals are fairly short and small, perhaps in agreement with the short duration of tremor in this region (Mar 9 - Mar 14).

Southern Puget Sound and farther south Stations. In this case some stations show the displaements due to the end of the Oregon ETS that progressed into southern Washington in Jan. 2018.  But also several stations have very obvious, fairly large recent displacements (THUN, CPXX, P420, and P421).  Thus, at least the south end of the Puget Sound zone seems to be having a significant ETS while to the north it doesn't seem to really be much, yet.

Those who would like to see exacly where these stations are and more position traces can find the very good set of web pages at regionally grouped daily plots done by PANGA.  There was a problem with their automatic plotting routines over the last several months until they got it fixed yesterday.

In my previous post I said there were three obsevations that indicated we were not yet having a real, classical ETS: timing, tremor strength and no displacements.  The timing still seems too early, and the strength seems too weak.  Of course, that strength observation was only very qualitative from visual inspection of some envelopes.  It could easily change once the new version of the wech-o-meter is ready and producing data for this period.  Thus, I am starting to agree more and more with Dr. Wech's comments about the system being more of a continuum such that total slip in a limmited area will average out over a longer period, but the nature and timing of each slip period can vary.  Indeed, the past few "classical" ETS events have not been as "classical" as those between 2005 and 2012.  While still on the roughly 12-14 month interval they have extended over different areas and propogated in different ways.  The current period may just have some additional differences in how it will develop with a much earlier than normal, hesitant start.

In asking several others about their thoughts on the current situation I got the following from Dr. Houston that I include with only minor editing.  She has studied tremor in this region quite extensively with a number of published papers on aspects of the way tremor propogates and its relationship to observed Geodetic slip.  Her comments:

Interesting.  Well, this event is low on hours of tremor (thus far) and apparently has weak amplitudes, so conventional wisdom would predict that it will also be low on slip.
I guess the question is how low, and probably we can't tell yet. But we may yet see some signal (maybe ratty) in the GPS, once it is processed and more is available.
Others could address the relation between hours of tremor and inverted moment for
the six events in 2007, 2008, 2009, 2010, 2011, and 2012. As you have discussed, after 2012, the propagation of many (all?) of the ETSs was complex and jumped then backtracked etc. This makes inverting for time-dependent slip, or even just total slip more difficult because it is harder to define and estimate the total offset in the GPS.
Is this a 'real ETS'? It is too soon to say right now. If it doesn't resume, I would expect some more activity to make up some slip, but it might not be a 'real ETS' either. Maybe we will have 2-3 small ones. Also I wouldn't be shocked if none of the above happened. I more or less agree with Aaron's point of view and would emphasize that each one (big ETS) is somewhat unique, some more than others. Most or all of the last five have seemed significantly more complex than 2007, 2008, 2009, 2010, 2011 (except it was preceded by an ETS thru Oregon), and 2012 (which propagated south and initiated updip).
In a way, the situation is similar to that of regular earthquake foreshocks, which can't be identified until the mainshock happens...
In brief I would say the '14-month ETS' has not been that regular in time, size, or space,
and, additionally, as Aaron said, all that tremor means (some) slip was occurring, so I dont really take to the acronym eTs.
OK, I am becoming more convinced than ever that it is unwise to make "predictions" about what tremor-slip may or may not do and what a "classical ETS" might be. I take back the 'eTs'  acronym, particularly when I miss-interpret data outside my specific area of expertise.  Even though it is hard to resist, in the future I promise to only report what has been observed and not try to "predict" what might come next.  I should have learned by now.  If one goes back to many of my previous posts you will see that I was wrong almost all of the time, at least in some aspect of a prediction.
Again, does this "correction" have any implications for earthquake hazards?  No! Nothing has changed here.  One thing we can all agree on is that a "normal" ETS is almost never normal. Not only do we not understand why they have some similar aspects and other things change, but we don't understand their relevance to earthquake hazard either.

I have had some notes sent to me by two REAL geodesists.  I feel these are worth adding to this blog, maybe to help clarify details of the GPS type data and their interpretations... at least for me.

The following is from Brendan Crowell, a Research Scientist, with the PNSN specializing in Geodesy and earthquake early warning who addresses specifically the issue of the northern Puget Sound ETS:

I wouldn't feel too embarrassed about this one, this is certainly a tricky one to spot on the GPS. My opinion is only 4 of the stations on Tim's plots have a decent signal (CPXX, P420, P421, and THUN). In the north, maybe SMAI but none of the other stations (I could see getting tripped up by OLYR but that one looks like long-period colored noise to me). I looked at an array of time series last week when you asked and either nothing was there or the most updated positions were unavailable.  P421 is probably the most historically clean, with really nice ETS signals in 2009, 2011, 2013, 2014, 2016, 2017 but showing nothing for this recent one.
Hopefully as more final orbit solutions come onboard, we can say more definitively whats going on.
OK, I feel a little better.  Yep, what is going on in the north is subtle.  But, in the south, I think it is pretty clear.  I got the following note from Tim Melbourne who is the head honcho at PANGA and just got back in town on Monday and has appologized for not having his nice regionally grouped plots by component avallable to the public before yesterday. He writes refering in particular to the south of Puget Sound area:
All time series on the CWU plots are PPP, they've just been detrended, deseasoned and destatic-offset'ed for all earthquakes and hardware changes (except SSEs) in order to better show spatial correlation of the SSEs.  This is why they look flat over 10+ years.

It's fairly clear an event is ongoing, if not just finished up, mostly down SW of southern Puget Sound.  Look at this cluster: http://www.panga.cwu.edu/data/wusdaily/WWH/

Below I show a recent  section of this web page that illustrates very well what Tim is talking about.  Some of the stations with offsets are actually pretty far west, not too far from the coast.  Interesting. 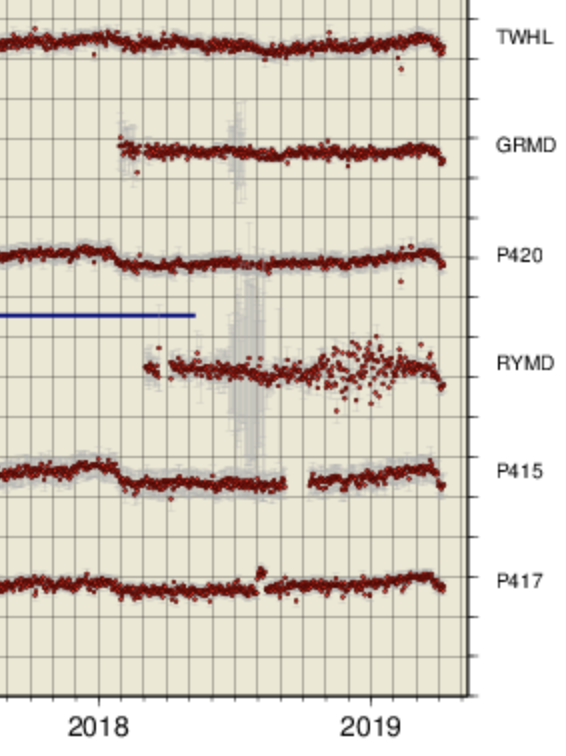 I plan to wait at least a while to see what if anything happens in the next week or so but then document things in the future as I have done in the past at the regular: ETS event of Summer 2019 blog type page.