Before people start running around yelling "eruption" after seeing the title of this blog I might suggest that they yell "boring" instead.  Indeed there has been a bunch of small earthquakes taking place just south of Mount Hood starting today (Feb 23, 2012) just after noon local time.  In the following three hours there were about 25 detectable earthquakes on the nearest seismic station, TDH.

Of these 14 were well-enough recorded to locate and have magnitudes between 0.1 and 1.8. 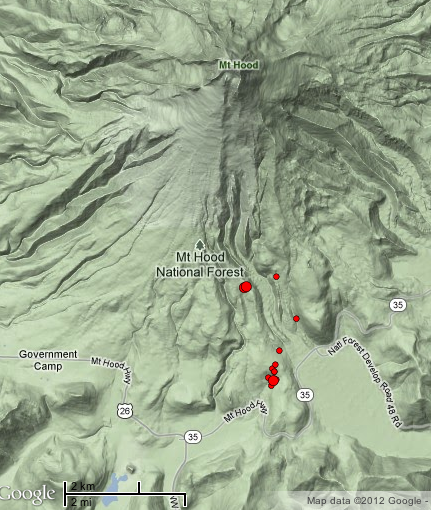 HOWEVER, this swarm is not that unusual.


The area just south of Mount Hood is known for a pocket (or nest, or school or hive) of earthquakes that occur in what we call, swarms.  Over the past couple of decades there have been many such swarms.  We have a brief summary of such swarms over the years including one swarm that had a few earthquakes greater than Magnitude 3.  A paper published in 2005 (J. Jones and S.D. Malone, Mount Hood earthquake activity: volcani or tectonic origin, Bull.Seis. Soc. Amer. #95, 818-832, linked here) studied the early swarms in great detail.  While not being able to absolutely rule out a volcanic connection to the generation of these earthquakes, this study concluded that these events were most likely due to regional tectonic stresses just like most earthquakes in the Pacific Northwest.

I would not be surprised if there were more events in this swarm.  Some past Mount Hood swarms have lasted for only a few hours but most have gone on for at least a few days. We will be keepng an eye on it to make sure that nothing truly unusual takes place, but in the meantime....... boring.