Where are the earthquakes in the Pacific Northwest?

Where are the earthquakes in the Pacific Northwest?

With the software and website we're building here for the PNSN, it is easier to review our entire earthquake catalog. Below I take a quick pass at the overall variation in frequency of earthquakes across Oregon and Washington.

Shown below are the 423 earthquakes since 1969 with magnitude bigger than 4. 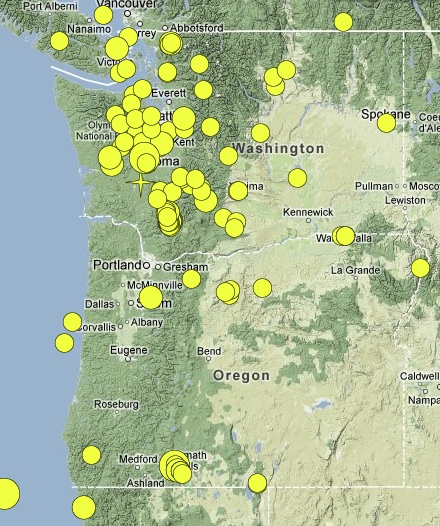 The catalog of M4+ events should be mostly complete, even though the network has been sparser in Oregon and in the east. It is clear that Washington is much more earthquake-pocked than Oregon, and the west has more to fear than the east. Puget Sound is particularly rumbly. One feature that is misleading is the tranquil region at and off the coast, where we know great strain is accumulating and M9 and M8 earthquakes strike every few hundred years.

400 events is about 1 per month. 2/3rds are at Mount St Helens in 1980, so 1 every 3 months is the average the rest of the time. Well, one M4 explosion (the cross) snuck into the collection, and a few are just outside our boundaries. This is more clear in the plot that shows cumulative number of events up to a range of times.

The tool that made these plots will be available on our website in a few weeks for the public to play with. We plan to put in an option to leave out the Mount St Helens seismicity in making plots, as its numbers overwhelm other patterns we may wish to investigate.

When I plot an west-east cross-section (left is west, right is east), the tectonic pattern starts to emerge.

The pattern is more easily understood with the addition of a cartoon cross-section showing the tectonic features controlling the location of earthquakes. The deep events plus the shallower events to the west are marking the subducting Juan de Fuca slab, indicated in the cartoon by the shaded region. The events from the middle of the plot east are occurring in the overriding North American plate.

Finally, we can plot when earthquakes of significant magnitude have occurred, below. There are two periods with more big earthquakes - 1974-1981 and 1990-2005, with fewer before, between, and afterwards. It could be random.

In any case, it illustrates that since Paul Bodin and I arrived in Seattle in 2006, we have significantly tranquilized the seismicity, allowing nothing larger than M4.5 in the entire region.