Entiat area earthquakes and other seismicity

Entiat area earthquakes and other seismicity

A persistent producer of small earthquakes is located near the town of Entiat, WA just south of Chelan.  This area has been known to be active since 1975 when the first set of seismic stations were installed near this area.  While the largest earthquake in this area was a magnitude 3.7 event in July, 1997 the PNSN locates about 55 earthquakes here each year, most less than magnitude 2 and thus not felt.  Below is a detailed map color coded by event depth (red- <1 km, blue- > 10 km) of all located events over this 46 year period.  The main zone of activity is centered on Entiat and is slightly elongated stretching about 24 km in the E-W direction and 16 km in the N-S direction.  Most events have a depth between 2 and 8 km.  Looking at cross-sections at many different angles there are no obvious structures indicating a single or few faults. 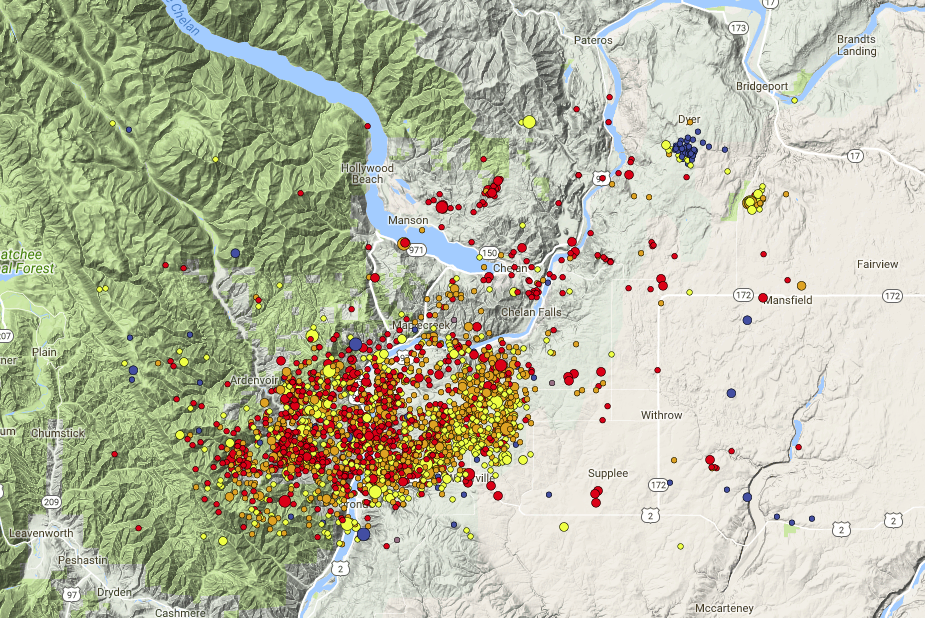 Unlike other places, particularly in eastern Washington the seismicity near Entiat does NOT take place in strong, isolated swarms.  While some of the larger (Mag > 3) events may have a few aftershocks most seismicity just putters along at a fairly uniform rate with minor fluctuations over weeks to months.  Here is a cumulative seismicity plot over the 42 years showing a nearly straight line over this whole period.

So the question has always been, why are these earthquakes here?  Why do they have a different time sequence than most other sequences in the Pacific Northwest?  Also, why have there been no larger earthquakes during this period. Based on a normal Gutenberg-Richter size distribution there should have been at least 2 earthquakes greater than magnitude 4 in the past 46 years.

While always suspected as being possibly related to a magnitude ~7 earthquake that took place somewhere in north central Washington in 1872, it is only in recent years that there has been increasing evidence that the Entiat zone is the location of that large earthquake.  Bakum and others (doi: 10.1785/0120010274 Bulletin of the Seismological Society of America December 2002 vol. 92 no. 8 3239-3258) using modern techniques for interpreting an extended set of felt reports suggested the area south of Chelan as the 1872 earthquake source zone rather than areas in southern British Columbia and the north Cascades as pervious studies had suggested.  More recently Brian Sherrod presented a paper that used LIDAR images to pinpoint a suspected surface fault just to the north-east of Entiat.  Close up investigations suggest this fault had a 2.5 m off-set sometime in the past few 100 years.  Just this year Brocher and others presented a paper examining the historical (felt report) catalog of possible earthquakes in this area to suggest that the on-going sequence is consistent with it being largely aftershocks from the 1872 event.  Both of these latter studies have not yet been published though the Brocher study is currently "in press".

Thus the Entiat earthquakes of the last few weeks are nothing new and there is no reason to think that these sorts of events will not continue for years if not longer.

Those that keep a close watch on our recent earthquake page may see a very recent event (red on the map) change its magnitude from that first reported; usually getting smaller.  Our automatic detection and locating system will often get the location of an earthquake quite accurately but does a poorer job with magnitude.  Any event located where there are few seismic stations or ones that are noisy or problematic for other reasons can get an artificially inflated automatic magnitude.  A duty seismologist (human eyes) can easily spot the problems with such errors and then make appropriate corrections.  In some cases the magnitude (and even location) may change hours later.  Our master analyst reviews all events sooner or later.  There are about 6 or 8 rotating duty seismologists who are tasked with responding quickly to review the automatic events.  For consistency we have one super expert review everyone elses work some time later.

Since we are on the subject of correcting errors, some may have noticed a scattering of isolated tremor events on the tremor monitoring page (Wech-o-meter) up and down Cascadia.  Most of these recent isolated events are bogus; ie false locations.  We have been having trouble with one of our wave-form storage systems that seems to generate small data gaps now and then.  Normally, this would be no problem but when many occur at nearly, but not exactly the same time it can generate an apparent set of wiggles in filtered data that fool the wech-o-meter locater.  Our policy is to just leave these locations in the catalog unless there are lots of them and are clearly all bogus.  Recently that is not the case.  In fact there has been a very typical southern Oregon - Northern California ETS going on for the past several weeks.  Here is a map of the tremor locations from Jul 22 to Aug 8 color coded by time (blue - oldest, red- newest).  Note that this ETS started just west of Weed and spread both south and north and then jumped farther north with a small gap near Grants Pass.  It may still be going on.  However, note that there are a few isolated locations north near Corvallis and others near and south of Eureka.  Looking in detail at the data during these events it seems that most (maybe all) are due to these data gap glitches and are not real tremor locations.  One of our engineers may have solved the problem yesterday and we are waiting to see if it is a long term solution. 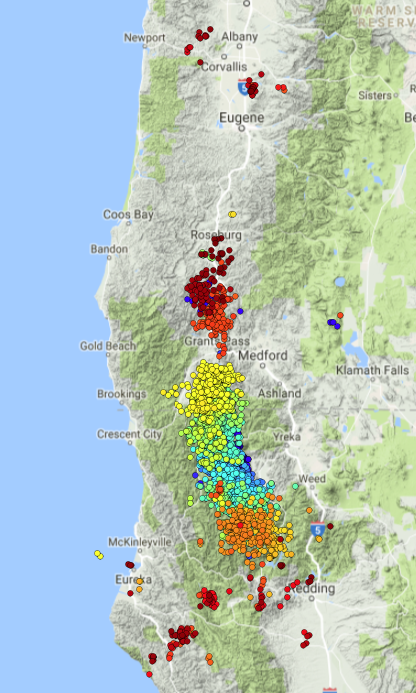