A new study, Time dependent changes in volcanic inflation rate near Three Sisters, Oregon, revealed by InSAR, offers a clear look at an intriguing and ongoing episode of activity during the last 15 years.  The study was written by Susan Riddick and David Schmidt of the University of Oregon, and appeared two months ago in the journal G-Cubed.  I show some of their figures and outline their conclusions here. 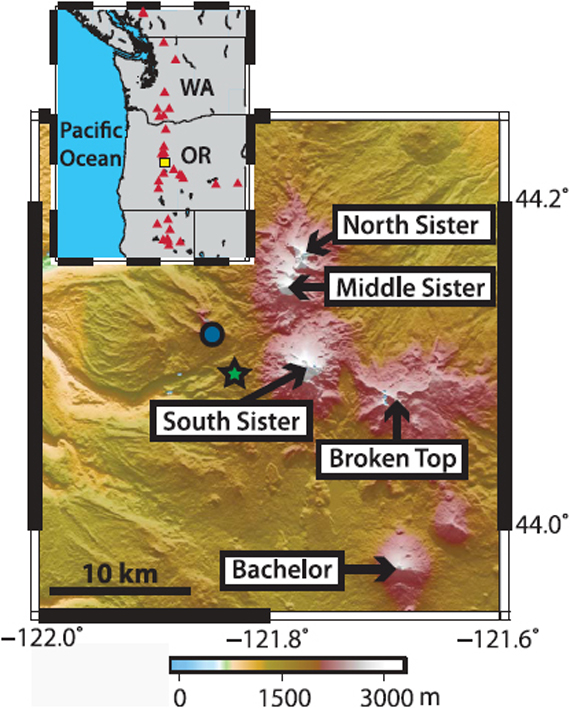 The first figure locates the Sisters volcanos, showing a green star for the location of the center of uplift.  Note that the uplift is not centered on any of the existing volcanoes on the surface.  The uplift is estimated by satellite-based radar measurements - suffice it to say they are sophisticated and cutting edge. 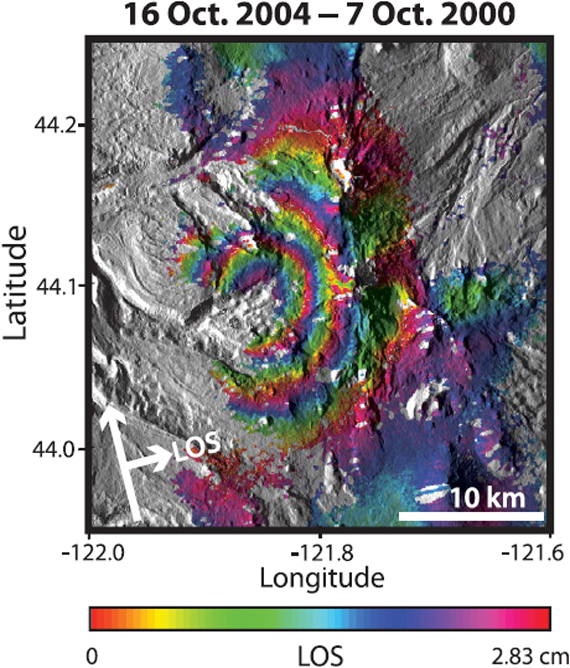 The second figure shows a good single image of the uplift.  The concentric rings are contours of uplift.  The total uplift in the center is about 25 cm between 1996 and 2010, which was the end of the study.  Tree-covered mountains are a difficult target for radar, so some areas do not allow useful measurements. 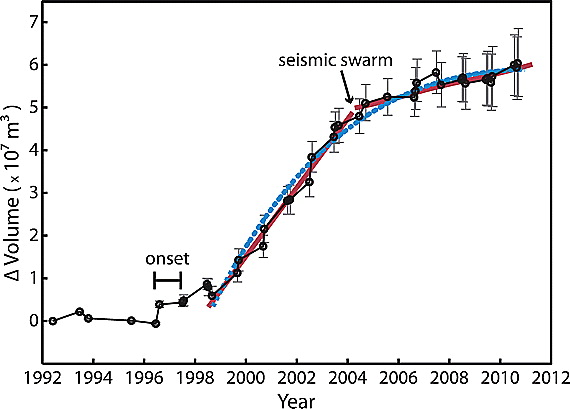 Combining almost 1000 radar images taken from different angles in different years with various satellites, the timing of the uplift, and hence the amount of magma injected over time is shown in the third figure.  The uplift started gradually in 1996, accelerated in 1999, then slowed in 2004, and continued through the end of the study period.

The only earthquakes in the region, in 2004, came around the time when the uplift slowed, for reasons that remain obscure.  It is notable however, that the earthquakes did not provide a clue to the duration of the uplift.  The authors speculate that the magma intruded so deep, about 7 km down, that the action was beneath the depth at which earthquakes normally occur.  Just one "low-frequency" earthquake, a special kind of earthquake associated with magma movement, occurred beneath the region at 12 km depth in 2006. 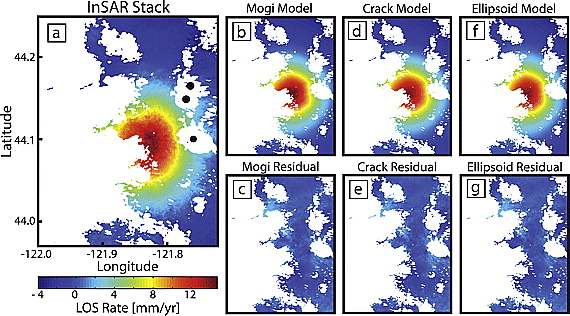 The very symmetrical pattern of uplift indicates simple inflation.  It could be explained by injection of a spherical volume of magma (Mogi Model), injection of a more complicated ellipsoid, or the opening of a horizontal dike or crack.  Injection of about 100,000,000 cubic meters of magma would explain it, which is the size of typical dike injection events inferred in the Aleutians and elsewhere.

Several conclusions are apparent.  First, Sisters is active and bears close monitoring.  Second, were this injection to lead to an eruption, it might form a new vent, however it is important to remember that much more magma is injected into the crust than erupted on the surface.  Third, the volume injected is modest, so that it would take many such injections to provide the magma for a significant eruption.  Fourth, we cannot count on seismicity to provide clear signals of injection - study of deformation is a critical complement to seismic monitoring.

To read the unadulterated original, the entire article is here.  If you are seeking even greater detail, the USGS page with articles about Sisters is here: USGS web page.

"the seismic monitoring of this area is NOT uniform.  There were almost no seismographs near 3-Sis until 2001 when one was added near by and then 2002 a couple more.  Thus, the beginning of the inflation could have had seismicity that we would have missed.  All earthquakes near 3-Sis that have been detected and located since then would have been missed before 2001.

One other comment is that volcanism in this area is often monogenetic (i.e., new vents for each eruption) so that is to be expected and also that eruptions of basaltic magmas are known to have sometimes (often) only brief and comparatively weak precursory seismic sequences, thus vigilance is even more important here than in Washington."

"I agree with Steve's comment that the volcano hazards in the Three Sisters area are quite different than other stretches of the arc given all the monogenetic cones.  This is particularly relevant to the current inflation given that it is distinctly off-axis of the stratovolcanoes."