Very small seismic events have recently been detected at and near Newberry volcano getting the attention of volcano seismologists at CVO and the PNSN. Five new seismic stations were added to the network this fall with a sixth coming on-line more recently. Previously only one, rather noisy station (NCO) was in this area and very few earthquakes had ever been located near here. The discovery of these recent events is due to the greatly increased sensitivity to small earthquakes that the new stations provide. Even with these new stations the seismic events recently detected are too small to be located by our routine procedures but are detectable by looking at webicorders or spectrograms, which we do routinely for all the volcanoes. Many only show up on three stations. 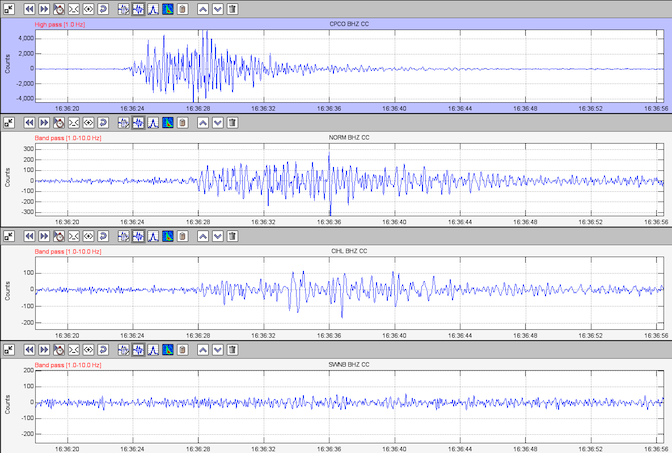 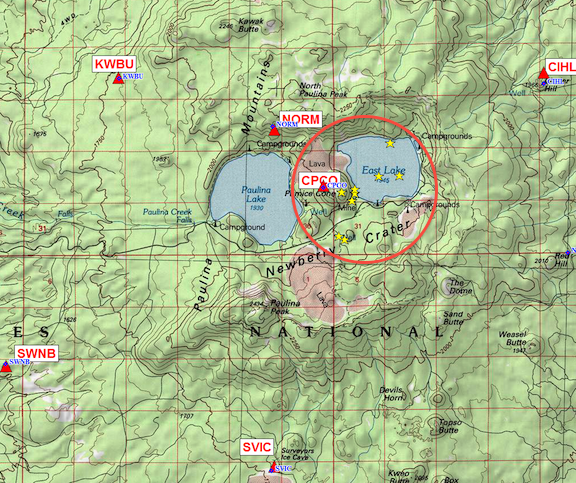 Careful analysis by Seth Moran, a CVO volcano seismologist  suggests that these tiny events are not even earthquakes but are likely ice-quakes taking place in the ice-covered East Lake. Crude locations put them in the vicinity  the lake and very shallow.

Since the seismic phases for these events are very hard to time accurately and they are only recorded on a few stations, inversions for epicenters vary widely. We feel that they all likely fall within the orange circle on the attached map but can be no more accurate than that. All such events have only been observed since Dec. 8 (after enough cold weather to allow for a lot of ice to form) and their tendency to occur at night (during the coldest temperatures) is also strong evidence for the ice source. Similar events have been reported on ice covered lakes in California, Wisconsin and Wyoming so this is not a first.

Other small seismic events detected in the Newberry area include a few to the west of Newberry near La Pine, Oregon. Some of these are probably due to blasting at a rock quarry. While Newberry is considered an active volcano with the most recent significant eruption only 1,300 years ago, and currently has active thermal features, these newly detected seismic events don't seem to be related to volcanic activity. This exercise does show that with the new station we should be able to detect very subtle precursors to future eruptions. There is more information from CVO on the new stations at Newberry.