May is Volcano Preparedness Month in Washington State

May is Volcano Preparedness Month in Washington, providing residents an opportunity to become more familiar with volcano hazards in their communities and learn about steps they can take to reduce potential impacts. It is a time to commemorate the May 18, 1980 catastrophic eruption of Mount St. Helens, which not only caused massive destruction and loss of life but also became a catalyst for a new era of unprecedented scientific discovery, technology development and community awareness. Partnerships for community awareness have created a variety of products and programs that allow Washington residents to learn about how volcanic eruptions can impact their community, to make preparations, and live with greater safety. 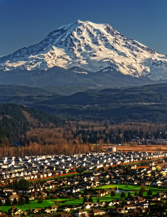 Colombian scientists and emergency management officials who are responsible for volcano preparedness at Nevado del Ruiz, one of the 20th century’s most devastating eruptions, will accompany U.S. counterparts during visits to the Mount St. Helens and Mount Rainier areas. The USA and Colombia share similar volcanic risks, and both have ongoing preparedness programs. By sharing knowledge and experience, both countries enhance their understanding of methods used to protect the public from volcanic hazards. In 1985, Nevado del Ruiz, an ice-clad volcano similar to Mount Rainier, erupted and generated lahars that killed more than 23,000 people. The Columbian delegation’s week-long visit to the U.S. will take place during Volcano Preparedness Month this May. It follows an April visit to the Nevado del Ruiz area by 10 U.S. officials and scientists who are responsible for volcano monitoring, notification and preparedness. This binational exchange of scientists, emergency managers and first responders is sponsored by the USGS and the U.S. Agency for International Development Office of Foreign Disaster Assistance.

A public event on volcano hazards will be held Thursday, May 4 at 6 p.m. at Orting High School’s Performing Arts Center, 320 Washington Ave N, Orting, WA 98360. There will be volcano-related exhibits and presentations by Colombian and U.S. officials about volcano preparedness within their respective nations.

On Sunday, May 18, 1980, at 8:32 a.m., the bulging north flank of Mount St. Helens slid away in a massive landslide. Seconds later, the uncorked volcano exploded and blasted rocks laterally, destroying centuries of forest growth in a span of several minutes. Nine hours of explosive volcanic activity ensued, altering the landscape, and what we know about volcanoes, forever.

Fifty-seven people died during that eruption, and more than $1 billion in damages occurred. Quieter eruptions during 1980-1986, and again in 2004-2008 built lava domes within the crater. Scientists at the USGS and the Pacific Northwest Seismic Network maintain a dense monitoring network on Mount St. Helens and other Cascade volcanoes.

The Washington Military Department’s Emergency Management Division, Washington Department of Natural Resources, the PNSN and the U.S. Geological Survey Cascades Volcano Observatory are working together to provide timely warnings and reduce the negative impacts of future eruptions. Together, the agencies develop and exercise emergency plans with communities, coordinate communications, conduct public education programs and plan for short- and long-term recovery in the event an eruption or lahar should occur.

Keeping up with volcanoes - local resources

The U.S. Geological Survey’s Cascades Volcano Observatory website has information about Volcano Preparedness Month events, as well as the USGS volcano-monitoring program and the hazards in the Washington and Oregon. Register for weekly updates and occasional information statements from the USGS Volcano Notification Service. Find information updates about volcanoes and read about science in action at USGS Volcanoes on Facebook.

Washington state’s Emergency Management Division website contains a section about the state’s volcanoes and volcano preparedness measures. Educational materials for children, families and communities are found in the publications section. Follow the agency’s Twitter feed, and Facebook page for breaking news and information.

The Washington Geological Survey (a Division of the Washington State Department of Natural Resources) has developed a new website that covers all aspects of Washington state geology. They also have a volcano-specific webpage that includes maps, geology, and information about evacuation and preparedness to inform landowners, residents, visitors, and emergency personnel about the hazards related to volcanoes. Check out their Geologic Information Portal to find interactive volcanic hazard layers to learn about the hazards where you live, work, and play. WGS has also developed a new series of postcards for each Washington Cascade volcano for this year’s Volcano Preparedness Month. The postcards are based upon posters developed in conjunction with USGS in 2016, and are available at many DNR offices.

The USGS–CVO, the PNSN, and the National Science Foundation-funded EarthScope Plate Boundary Observatory work to improve eruption forecasting and warning capabilities for Cascade volcanoes as part of the National Volcanic Early Warning System. They continue to monitor Mount St. Helens and other volcanoes in the Cascade Range for signs of unrest. The monitoring network operated by USGS and the PNSN enhances the likelihood of detecting preliminary signs of increasing volcanic activity at any of the Cascade Range volcanoes.

USGS provides science for a changing world. Visit USGS.gov and follow us on Twitter @USGS and our other social media channels.