Slow slip: A new kind of earthquake under our feet

Slow slip: A new kind of earthquake under our feet

As it has been quiet for a few days since the military jets buzzed Mount St. Helens, I'll plagiarize from and link a paper of mine that appeared this past month.

Slow-slip episodes are news because they strike the deeper portion of the Cascadia subduction zone (and many other faults) previously thought to move boringly steadily, they take a long time to complete, and they can recur almost like clockwork. Traditional earthquakes share none of those characteristics. 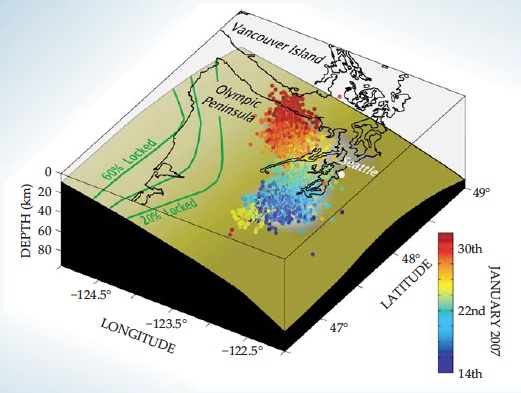 Figure - Evolution of a single slow-slip episode in the Cascadia subduction zone. The episode started with the deep blue dots near the southern end, spread bilaterally for a few days, and continued to the north for the rest of the 2 weeks shown. (Courtesy of Aaron Wech.)

Can slow slip be helpful in assessing the threat of great earthquakes? It’s possible, and that possibility is one of the motivations for the current studies.

The discovery of slow slip has inspired geophysicists and remains the focus of intense attention. Dense arrays of seismometers are being planted in several places, which we hope will resolve many of the questions framed above. As Yogi Berra said, “You can observe a lot by watching”.

But for the full length article, tempered to be easy to read by a capable editor and with professional figures, look at the whole article.