Earth is not expanding

Earth is not expanding

There have been persistent eccentric theories that scientists have missed the boat, and earthquakes, geology, and the history of the Earth can be better explained by an expanding Earth.  Prominent among the iconoclasts are the late Australian geologist S. Warren Carey, who wrote the 1976 book The Expanding Earth (448 pp., Elsevier, Amsterdam), and his followers. 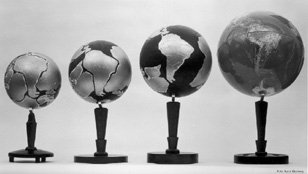 There are 3 forms of the expanding earth hypothesis.

It has been hard to prove the Earth is not expanding for many reasons.  The evidence can be confusing, as many precise datasets come only from small geographic areas, the water in the ocean would slightly expand if the water temperature rises, or appear to change if the ocean currents change.  The time interval over which man has been able to make measurements is very short compared to the history of the Earth.  Individual datasets lack resolution, and scientists are notorious for sometimes underestimating uncertainty, which ascribes significance to insignificant deviations from standard theories.

Here is the latest word, from the journal Geophysical Research Letters last year.  The radius of the Earth is changing less than a mm every five years, and consistent with no change whatsoever.

The International Terrestrial Reference Frame (ITRF) is a fundamental datum for high-precision orbit tracking, navigation, and global change monitoring. Accurately realizing and maintaining ITRF origin at the mean Earth system center of mass (CM) is critical to surface and spacecraft based geodetic measurements including those of sea level rise and its sources. Although ITRF combines data from satellite laser ranging (SLR), Very Long Baseline Interferometry (VLBI), Global Positioning System (GPS), and Doppler Orbitography and Radiopositioning Integrated by Satellite (DORIS), its origin is currently realized by the single technique of SLR. Consequently, it is difficult to independently evaluate the origin accuracy. Also, whether the solid Earth is expanding or shrinking has attracted persistent attention. The expansion rate, if any, has not been accurately determined before, due to insufficient data coverage on the Earth's surface and the presence of other geophysical processes. Here, we use multiple precise geodetic data sets and a simultaneous global estimation platform to determine that the ITRF2008 origin is consistent with the mean CM at the level of 0.5 mm yr−1, and the mean radius of the Earth is not changing to within 1σ measurement uncertainty of 0.2 mm yr−1.

So now exotic theorists will probably take expanding Earth ideas to the next level of complexity - maybe the expansion rate fluctuates, and the current lack of expansion is temporary, maybe our understanding of physics is flawed such that gravity is changing or worse, or maybe the Earth is alive and fooling us.

IMO, the battle against outlandish theories is part of progress.  Despite the lack of merit in the idea of an expanding Earth, one can always hope new ideas will appear.  Plate tectonics was once outlandish, and deterministic earthquake prediction is considered now nearly outlandish.  Time will tell which ideas are wrong, like expanding Earth, and which are not.