A Perspective on Tremor Activity

A Perspective on Tremor Activity

With all the tremor activity occurring in the Pacific Northwest recently, I thought it important to provide a little perspective. 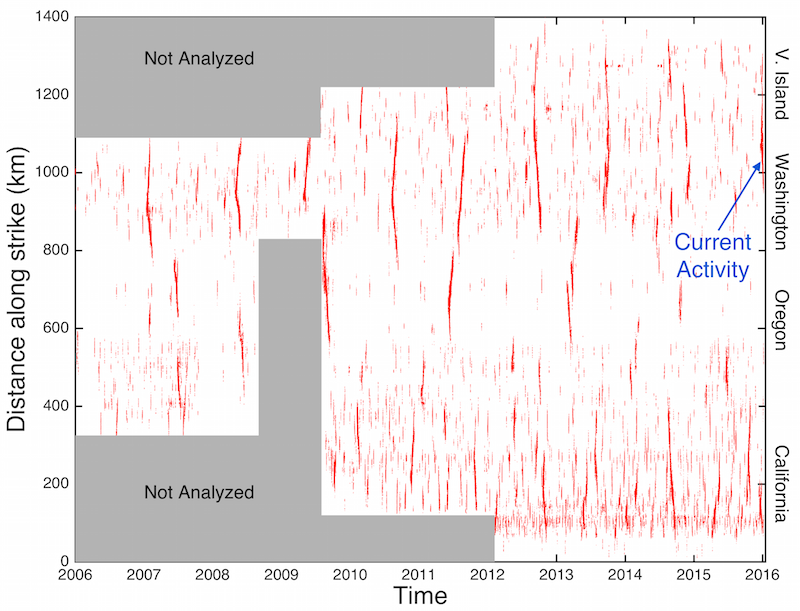 To round out that perspective: the above image shows the entire tremor catalog for the past 10 years plotting time (x axis) vs. distance along the coast (y axis) from northern California to Vancouver Island. When viewed this way we see that this activity is business as usual. These things, large and small, happen all the time. There are over 300,000 tremor dots plotted there. The big vertical stripes are major tremor episodes that have migrated hundreds of km, like what we’ve observed for the last 3 weeks from Vancouver Island to Washington (seen as a tiny sliver on the right hand side). There have been 9 such events in Puget Sound since 2006, but that’s nothing compared to southern Cascadia. Northern California has tremor activity constantly, and hardly a day goes by when there isn’t tremor somewhere in the subduction zone.

The relationship between slow slip and megathrust earthquakes is unresolved and very much an area of ongoing research. However, a large body of work from Cascadia as well as other subduction zones worldwide (e.g. Japan, Mexico, Alaska, Costa Rica, New Zealand) suggests that these events are an integral part of the greater earthquake cycle. That doesn’t mean they have no effect. We honestly don’t know and need more than 10 years of data to answer that. But it does mean they are neither anomalous nor acutely ominous. The activity is a good reminder that we are sitting on an active fault and need to be prepared, but it’s important to keep a broad spatial and temporal perspective. The current episode isn’t distinctly more anomalous or sinister than the previous one. Or the 8 before that. Or the dozens we’ve observed in northern California. Or the likely hundreds that have occurred all along the subduction zone since that last great earthquake. It isn’t necessarily good. It isn’t necessarily bad. It just happens.