The seismic signals (ground vibrations) generated by the motion of the Oso landslide were very well recorded by the Pacific Northwest Seismic Network (PNSN), indicating it was a very rapid and energetic event (though this is apparent from the tragic consequences and eyewitness reports). Signals at the lowest frequencies (long periods), which travel farthest before attenuating, have been detected up to ~274 km (~170 miles) away from the landslide (station DAVN) though this distance may increase as more data are analyzed.

Recordings from seismic stations that recorded the event well can be used to determine the timing of the sequence of events (see Timeline section and Figures 2-3). Seismic signals from landsliding are distinguished from other noise such as vibrations of distant earthquakes and human and natural noise local to the seismic station by the frequency content, duration, shape and other characteristics of the waveforms.

Seismic signals from landslides are distinct from those generated by earthquakes (Figure 1). Energy is generally concentrated at lower frequencies (<5Hz) and the signal emerges gradually from the noise. Earthquake signals, on the other hand, have a broader range of frequency content and arrive suddenly with the sharp onset of P waves followed by often distinct S wave and surface wave arrivals. These distinct arrivals are typically not observable in landslide seismograms. The reason for the differences are different physical mechanisms that generate the waves. Earthquakes are generated by brittle slip along a fault plane deep in the earth that starts suddenly and lasts a very short time whereas landslides typically last several minutes or longer and energy builds up more slowly as the material accelerates and begins to break apart. The peak seismic amplitudes will be reached often toward the middle of the signal, peaking, and then gradually fading back into the noise again.

Not all landslides generate strong seismic signals observable at large distances. The event must be large and energetic for the resulting seismic waves to be observable tens to hundreds of km away. Most if not all of the Oso landslide subevents that were recorded seismically were probably generated by material breaking off the source area and moving rapidly downslope, not by slow creep or mud moving slowly in the valley. 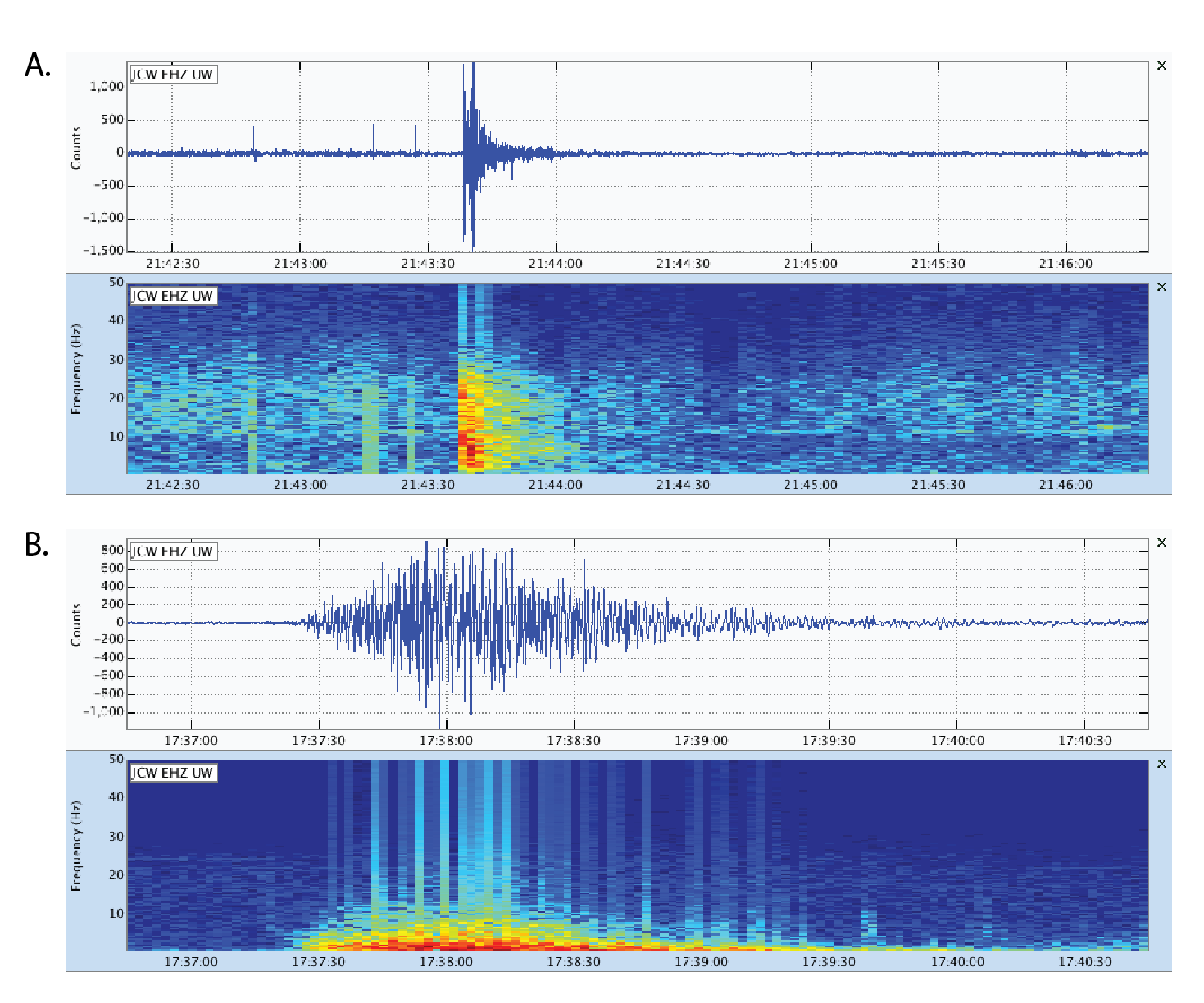 Figure 1: Comparison between seismic signals characteristic of A.) a regular small earthquake signal (this is the M1.1 that occured on March 10th near the Oso slide) and B.) a landslide (this is the first slide from the Oso sequence). Note the x-axis is of equal duration in both cases. Click to enlarge. 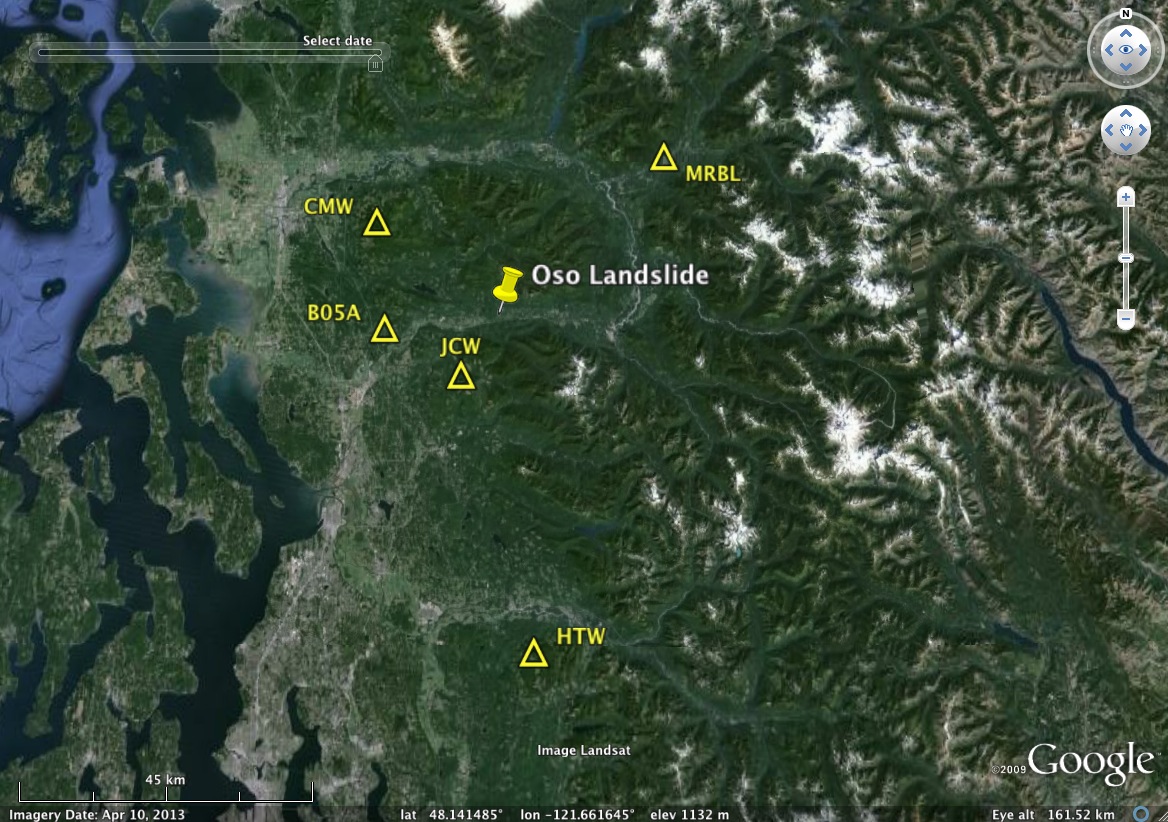 Figure 2: Google Earth map of landslide location relative to seismic stations referred to in this report.

The seismic data recorded at the closest station, Jim Creek Washington (JCW, Figure 2), is displayed in webicorder format on Figure 3. This figure can be read like a book, each line shows 30 minutes of conitnuous seismic data collected at 100 samples per second. Notable events are labeled. 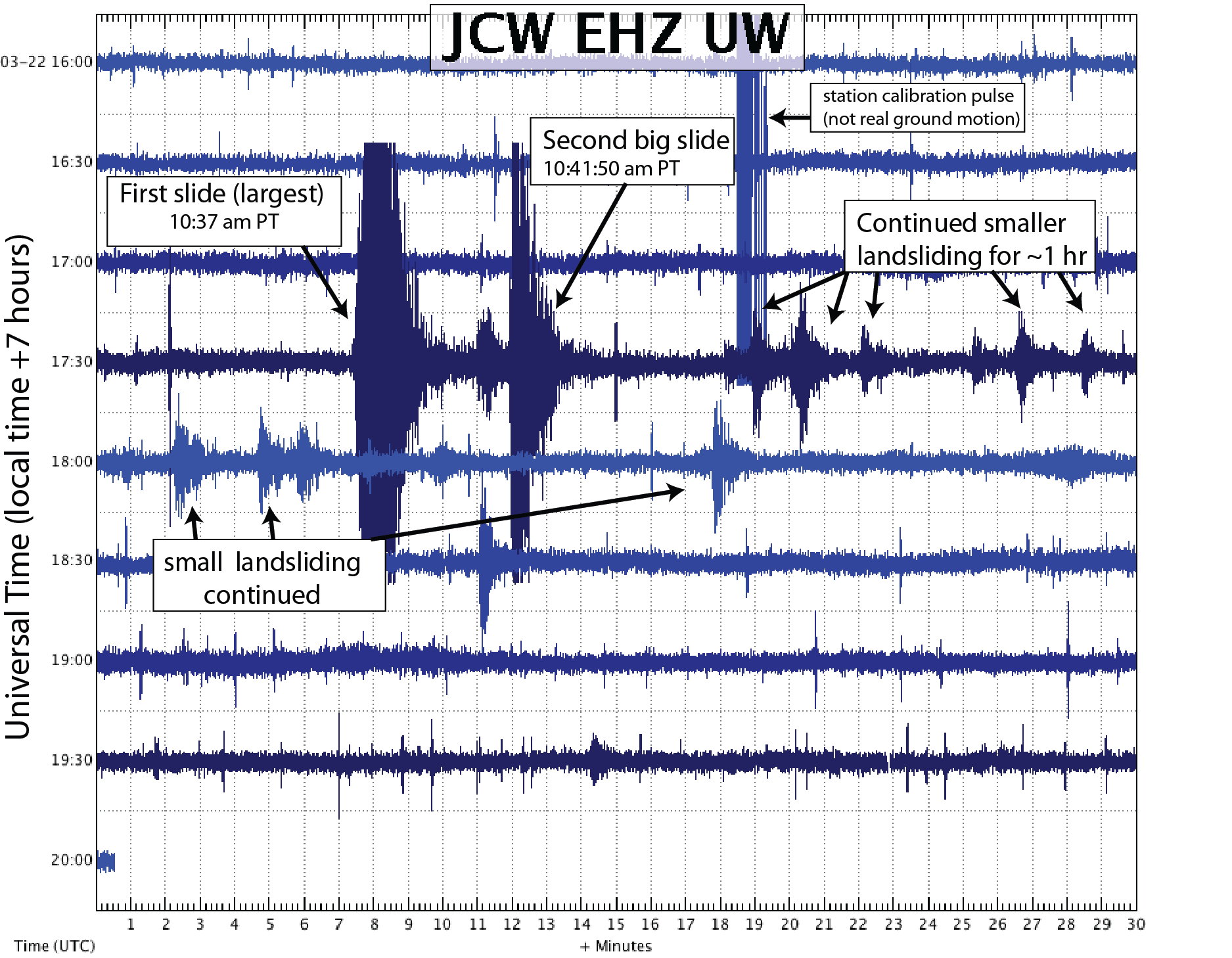 Figure 3: Timeline of landslide seismic signals as recorded at the closest seismic station (~7 miles/11km away). Each line represents half an hour of continuous data recorded at JCW. See text for details, click to enlarge.

The sequence began at 10:37:22 am local time (17:37:22 UTC) with the most energetic and longest duration seismic signal, lasting about 2.5 minutes. This subevent generated strong long period motions observable over 270 km away, which suggests the acceleration was very rapid and a large amount of material was involved (See Figure 7). This was most likely the rapid collapse of the old slide material that was previously disturbed and weakened in 2006 (Figure 4, 2006 slide area) and was the initial slide that impacted the neighborhood below at high velocities with no warning. After a brief interlude with one minor discrete slide at 10:40:56 am, the next large slide occurred at 10:41:53 am. This was slightly shorter in duration than the previous signal, and did not generate such strong long period motions as the first signal, suggesting the movement was less rapid. This may have been the newly unstable area upslope of the 2006 slide area (Figure 4, New slide area) slumping down onto the debris below. Continued rumbling and discrete smaller landslide seismic signals continued for more than an hour afterwards, most likely a result of smaller landslides breaking off the headscarp area left unstable by the initial events. 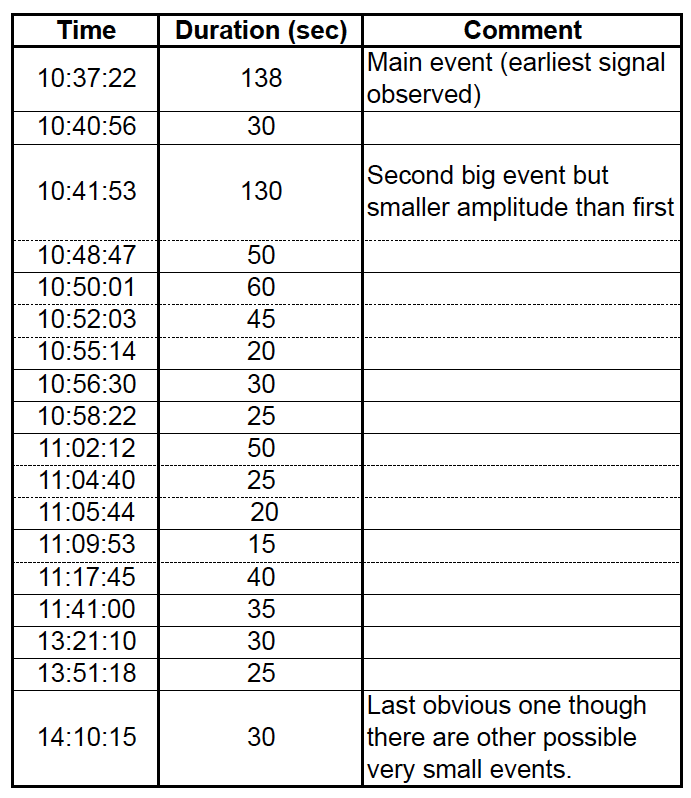 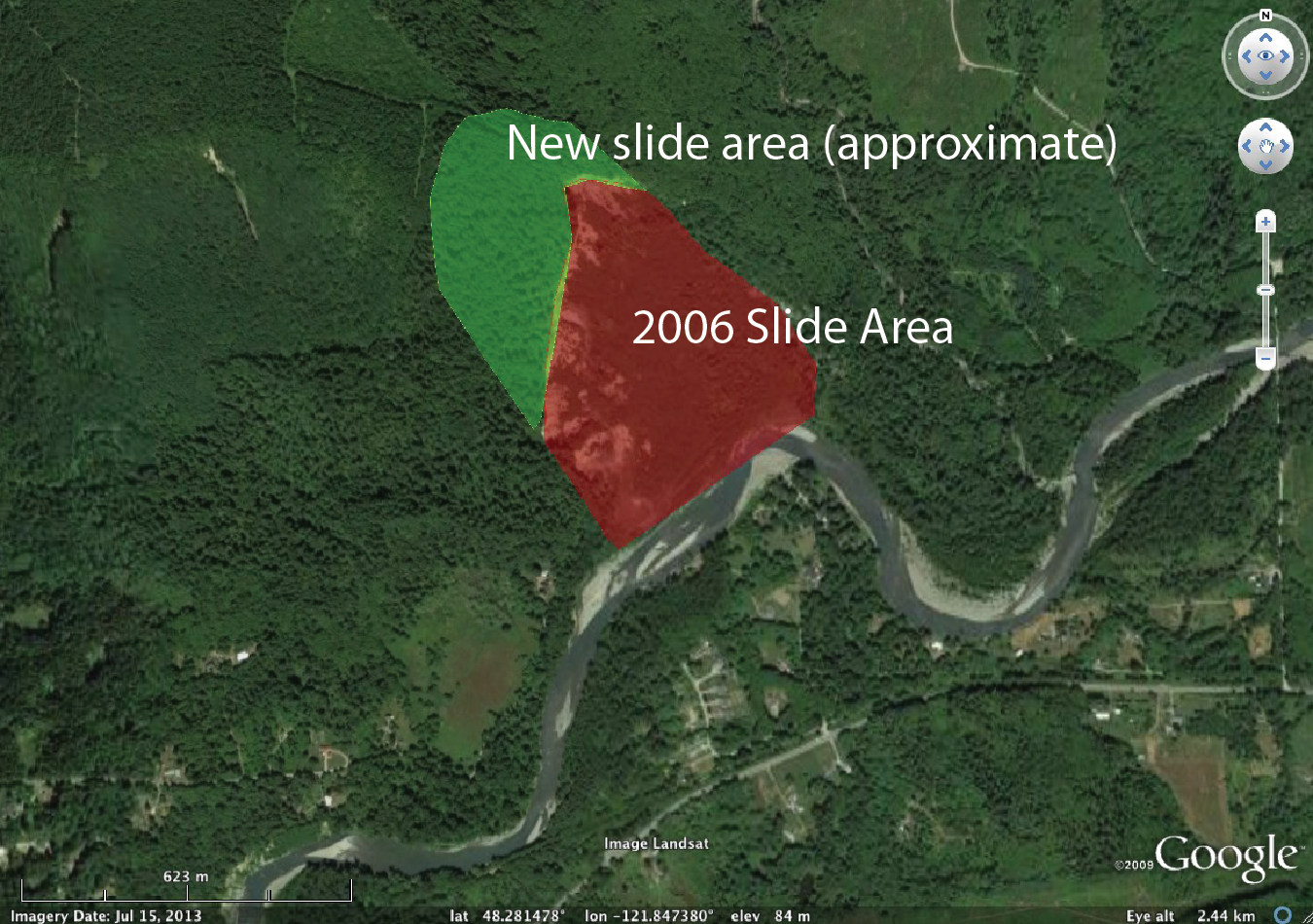 Figure 4 approximate boundaries of Oso slide source area corresponding to what we interpret to be the two main slides observed in the seismic records. See text for details.

Seismic Signal recorded on other stations

The ground vibrations from this event were picked up on a number of nearby seismic stations. Figure 5 shows a record section (seismograms from different stations plotted proportionally to their distance from the source) of the landslide as recorded on the seismic stations shown on Figure 2. The same data, showed in spectrogram form (frequency and energy over time), are shown on Figure 6. Note that most of the energy is concentrated in the very low frequencies (less than 5 Hz).

These ground vibrations are too low in frequency to actually be heard by the human ear, but if we speed up the seismic record by 160x, we can "hear" what the landslide sounded like, as recorded 11 km away at JCW. The following sound file was created by condensing 1 hour of seismic data (10:30-11:30 am PT) into 22 seconds using a tool available through IRIS webservices: 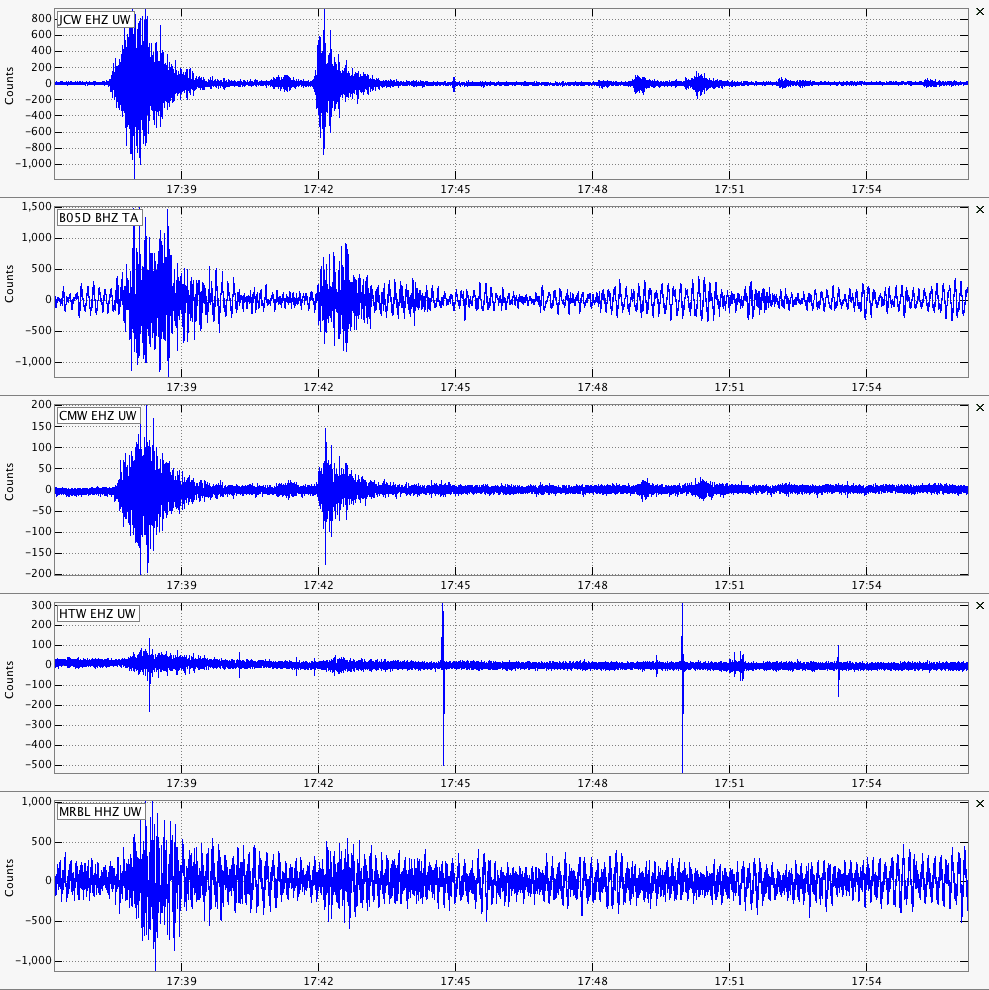 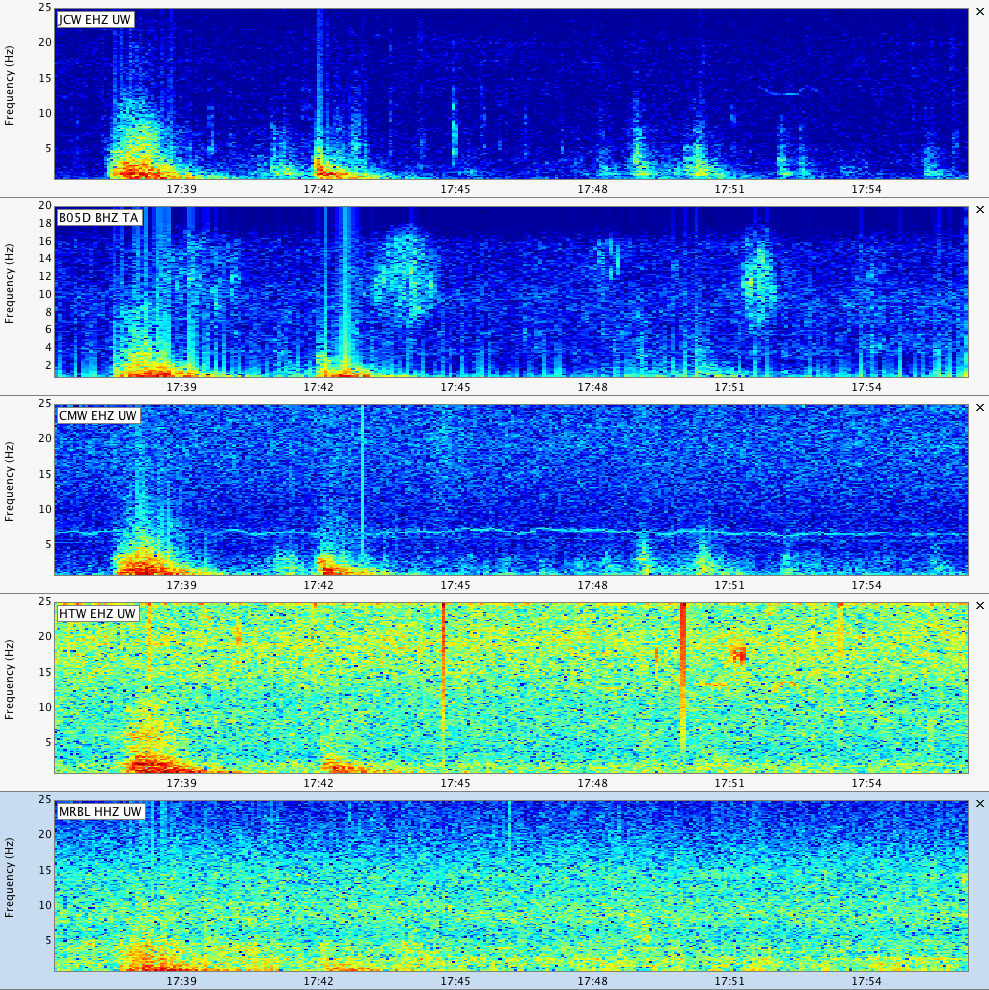 Figure 6: Record section of the same data shown on Figure 5 in spectrogram format. Color indicates the strength of the signal at a range of frequencies over time. Times are in UTC (local time + 7 hours)

Forces Exerted by the Landslide

Very large and rapid landslides can generate a very low frequency (long period) pulses with wavelengths of tens to hundreds of seconds, due to the force the earth feels when the volume of material accelerates. The higher frequencies are generated by frictional processes as well as the impacts of individual blocks as the sliding mass breaks apart and flows. The longest period parts of landslide signals have been used successfully to determine the forces exerted on the earth over time by the moving landslide mass, but this has only been done so far for rapid landslides much larger than the Oso slide. However, the a long period (20-50 second) signal from the Oso event was recorded on at least 17 broadband seismic stations (see Figure 7 for examples) so it may be possible to determine the forces over time for this event which can then be used to better understand the dynamics of this event.  This work is in progress and we don't have results to report yet. 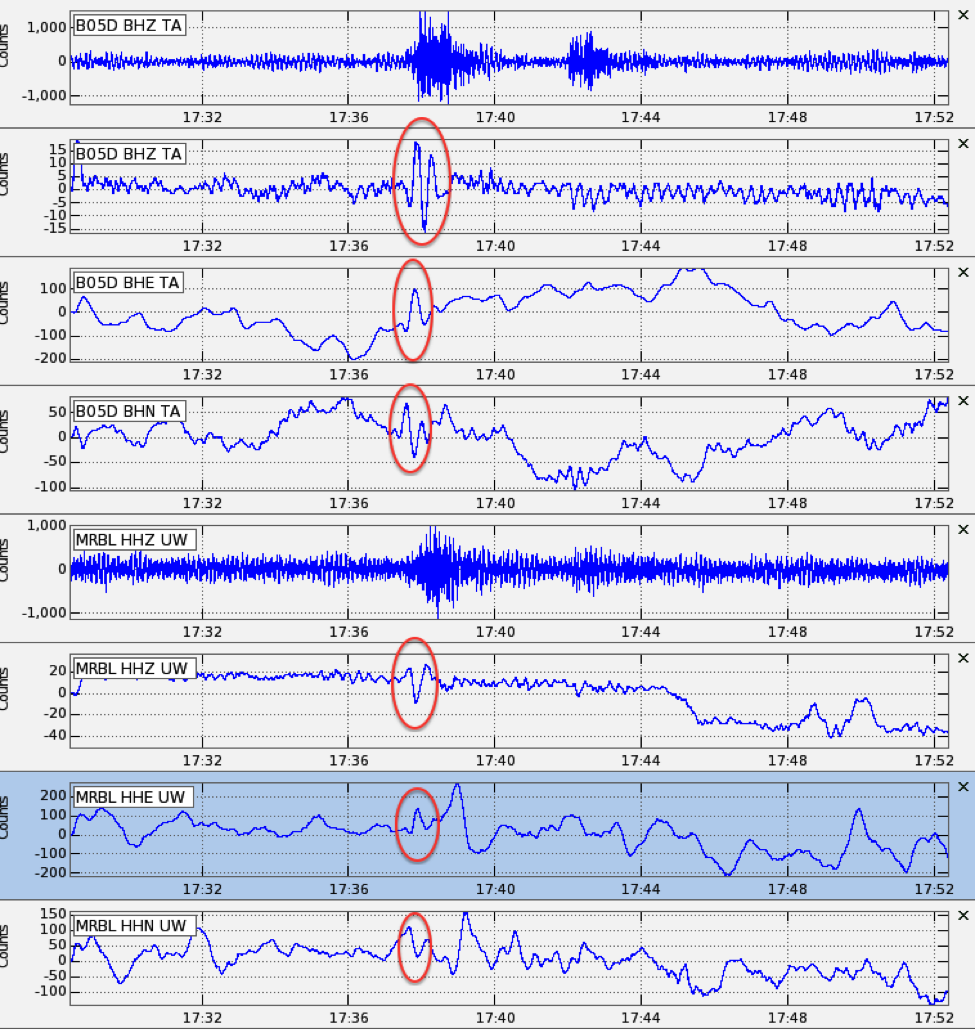 Figure 7: Three component seismograms from the two nearest broadband stations to the slide. The first trace from each is a high frequency filtered version of the vertical component. The three other traces are long period filtered (<0.04 Hz) versions with the slide siganl circled in red. Long-period signals at other times are typical of ambient noise that is particularly large on horizontal components.

Looking carefully at the seismic records from station JCW before (and after) the landslide shows many very small events that started around 8am PDT and stopped in the late afternoon. At first these were thought to be possible precursory slip events; however, we are convinced that they are unrelated to the slide and and probably have a cultural source.  Careful examination of filtered seismograms from the next nearest seismic station, B05D shows no such events.  If they were originating from the slide area they would also have been recorded at this station.  Also, looking at the days before and after March 22 we see the same sort of events only during daylight (working) hours, thus they likely have a man-made source.

A visual scan of the seismic data in the days prior to the event did not uncover any other obvious signs of potential precursory activity.

Magnitude 1.1 Earthquake on March 10th in vicinity of Oso Slide

There was a magnitude 1.1 earthquake detected by the PNSN located About 2 km from the Oso slide ± 0.8 km at a depth of 3.9 ± 1.9km on March 10th, 2014 at 21:43 UTC (14:43 local time), twelve days prior to the landslide that has received some attention from the press as a potential trigger. However, the shaking from a M1.1 is extremely weak and would not have been enough to trigger the landslide. Crude estimations of ground motions at the slide site from such an event would be less than 0.01%g, far below what would be expected to have any effect whatsoever. Earthquakes of comparable magnitudes occur on a daily basis all over the state so a M1.1 is not unusual in and of itself. The only thing that makes this event notable is that it is located close in space and time to the eventual Oso landslide.  In the previous 25 years, only 5 or 6 events in the PNSN catalog were as close to the slide location, however the seismic network is not sensitive to events much smaller than M1.1 in this area. Using the waveform from the March 10th event as a template we searched for previously undetected smaller events with similar waveforms (meaning they occurred nearby) and found 7 additional events in the past year located very close to the M1.1 (Figure 8). There is no indication of accelerating activity prior to the slide.

Swarms of small earthquakes like this happen regularly in Washington state and have historically occurred along the Devils Mountain Fault that runs through the valley. The physical meaning of swarms of similar small earthquakes is not well understood, but they can sometimes be related to slow deformation. Because the computed location of the M=1.1 earthquake was close to the top of the slide zone and almost within the formal error estimates of the location we ran some tests to see if it could have been mis-located by that much.  By fixing the location at the top of the slide zone and computing arrival times at the recording seismic station we determined that the time residuals from such a source are clearly outside any possible picking errors. Thus we feel that it is highly unlikely that this event and the others like it are related to the slide itself.

In the remote case that the M1.1 earthquake (and/or the other small similar quakes) is related to the Oso landslide, the most plausible explanation would be slip related to ongoing slow deformation within or below the unstable hillslope. A typical magnitude 1.1 earthquake would have a slip plane with an area on the order of 900 square meters (~17 m radius for circular plane, estimated using empirical relations in Wells and Coppersmith, 1994) with slip on this plane of less than 1 mm and the shaking cannot be felt except by sensitive seismic instruments, so this was a very small movement in any case. The other similar earthquakes found were even smaller. 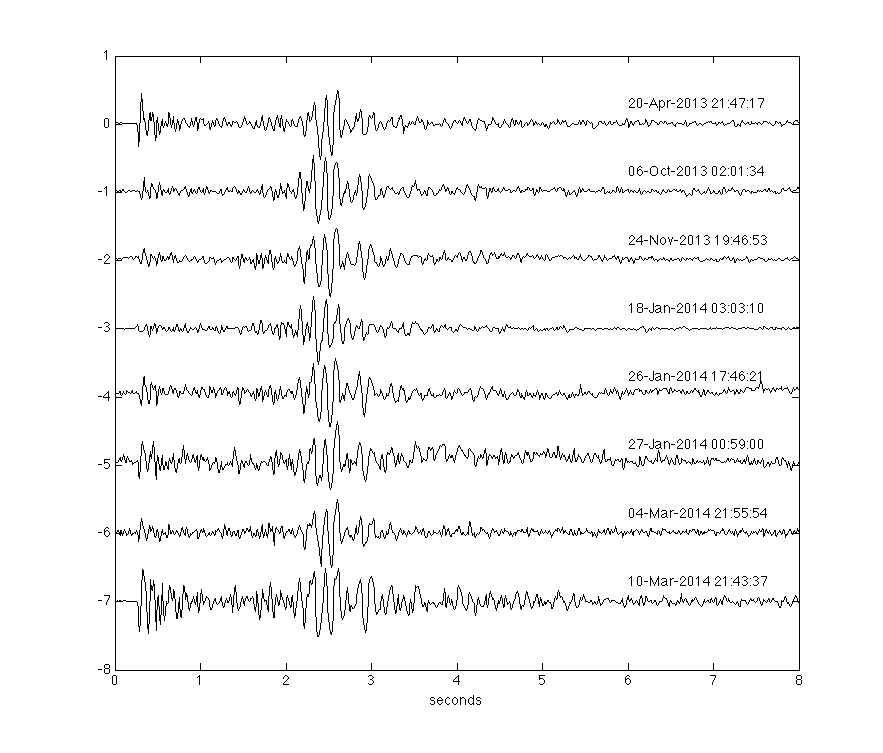 Figure 8: Waveforms and event times of earthquakes with similar waveforms to the March 10th M1.1 event (thus having similar locations and mechanisms) that were previously undetected. These events were detected by scanning the past year of data at station JCW for matches to the waveform of the March 10th event (correlation coefficient of 0.5 or greater).