NOTE: An even newer update is now available but one might read the one below first.

Tremor monitoring at the PNSN has continually evolved over the last 10+ years. The first incarnation of the tremor monitoring page was developed in 2008 for internal use only, and it focused solely on northern Washington. Demonstrated success with that initial system enabled the expansion to include Oregon and southern Vancouver Island, as well as a public facing web page in 2009. The system expanded further in 2012 to include the northern- and southernmost extent of the subducting Juan de Fuca plate. Since then, very little has changed – neither with the webpage interface nor the underlying algorithms detecting and locating tremor.

The current system works, and is relatively robust, so why change things? For that, a little background… I’m a USGS seismologist at the Alaska Volcano Observatory in Anchorage, AK. I created the system and webpage en route to a PhD at UW. This isn’t about me, but it’s relevant for a couple reasons:

For the past ~1.5 years, we’ve been working on a new version of the system – complete with a new webpage user interface and improved methodologies under the hood. The basic tremor detection methodology hasn’t fundamentally changed, but the parameters chosen and some of the logic in discriminating tremor from noise has been improved. I’ve also changed the output to a more holistic, integrated catalog that isn’t broken into the 9 subregions of the old system. The details of these changes are too dry and boring to spell out here (they’ll go into a technical journal), but the most significant result of these changes is a lower detection threshold – that is, we can detect more tremor than before. This change creates a break in the catalog (on 18-Feb-2018), such that comparing activity levels before and after the change must take this into account. These changes have also resulted in the tremor being spread over a slightly larger area.

Here is a comparison of a ~month’s worth of tremor this spring shown for both the old and new version on the new map interface.  Besides detecting more tremor (half again as much in the new version), there is also more spatial resolution now. Note  the tremor is spread over a larger area in the new compared to the old (legacy) system. We are working to understand the significance of this difference. 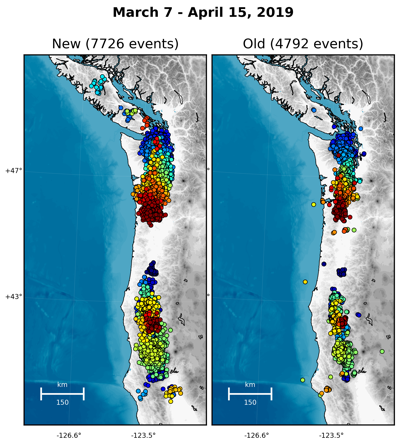 The other significant addition to the methodology doesn’t affect the amount or location of tremor, but rather the characteristics of tremor. The original catalog has always suffered from an inability to say how strong a tremor burst was. By comparing the radiated seismic energy with that of earthquakes recorded by the PNSN I have developed an empirical energy magnitude. So we can now automatically compare tremor strength from day to day or place to place (magnitudes range from 0.5 – 2.2). For now the magnitudes are displayed, but not included in catalog downloads. The details for calculating energy magnitude (Me) aren’t 100% settled and would very much benefit from peer review before being publicly released for interpretation or comparisons with GPS data.

The tremor client (web interface)  is also a complete rewrite. Most notably, the Google Map has been replaced with Leaflet, which is an open source web map interface. The tremor client is compliant across all modern browsers and mobile devices and does not rely on any third party proprietary libraries such as Flash. Arbitrary geographical selections can be made rather than the fixed regions of the old version. There are several different color palettes for plotting events by time and the density plot is now a much better “heat” map emphasizing where most of the tremor is located. To guide the transition, a tour feature has been added that walks the user through all of the features (see upper right corner).

One thing that is being discontinued is the so-called “real-time” or “hourly tremor” plots available in the old system. These used a pared down, quick-and-dirty method that often resulted in erroneous tremor locations unsubstantiated in the daily processing. The page too often proved to be inaccurate and unreliable to justify maintaining it.

As always, it is important to remember that the tremor monitoring system is 100% automatic and not human-reviewed. Manually reviewing 100s of epicenters daily for erroneous locations or spurious data is untenable. A lot of work goes into performing internal quality control checks on the original data, but no system is perfect, and the sheer volume of data and required calculations means that errors are going to sneak through. Even if the false-positive or mislocation rate is <1%, that can still be several per day. Gross patterns and activity rates are largely trustworthy, but individual locations and magnitudes should be interpreted with care.

It may be useful to compare the new web interface map with the old one for the same day's tremor.  Besides the new bells and whistles available (see the tour in upper right corner for a complete run-through) the new appearence is much nicer and has better resolution. 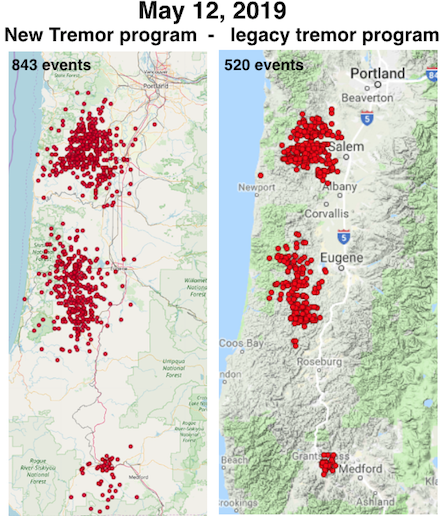 The old (legacy) tremor monitoring system will be run along with the new one for a while, but only until we are satisfied that the new one is doing everything we expect it to and is stable.  If we find bugs and/or decide to add additional features these will only be applied to the new system.