Just after midnight last Thursday I woke up to the jingle of multiple text messages followed by several pages. DUBIOUS ALERT M3.0, DUBIOUS ALERT M4.4, DUBIOUS ALERT M4.4... Multiple earthquakes in very close succession may happen in movies but are uncommon in real-life, so I immediately suspected that our network was set off by the seismic waves from a large earthquake far away (a so-called teleseism). This is in fact fairly common.  The DUBIOUS qualifier in front of the pager messages meant that the earthquake information had not been released yet and that I needed to review the waveforms to see if these were real, local earthquakes.

I immediately went to the U.S.G.S. website earthquake.usgs.gov and saw that there was a bright red, large, dot in Alaska indicating that a very recent, large earthquake had just happened there. There was the culprit!  I also saw one small red dot in Washington State and a larger red dot in California.  My first thoughts were, "Shoot! We released a smaller bogus event" and "I wonder if that event in California is real?". I called into the conference line in case others also had woken up and wanted to know what was going on. There were three of us on the line, John Vidale, Erin Wirth, and I, and we sat there waiting for waveforms to show up in the desktop analysis program so we could take a closer look at the smaller event that was distributed to the U.S.G.S. and the world.  I tagged the bigger false events as teleseisms via our Duty Review Page. Meanwhile, it was clear from seismograms on our PNSN webpage that the small event had been real (see the Figure below, recorded near Mt. Shuksan in WA). When the system was finally done harvesting all the waveforms (took extra long this time because it saved almost every channel in our network multiple times because multiple solutions had been generated) we quickly re-analyzed the one real earthquake and confirmed that indeed it was small.  We were lucky, none of the bogus solutions had left our building. The California event (initially estimated as a M5.1 earthquake), however, also turned out to be a bogus solution for the large Alaska earthquake and was therefore cancelled.

This is why earthquakes disappear. 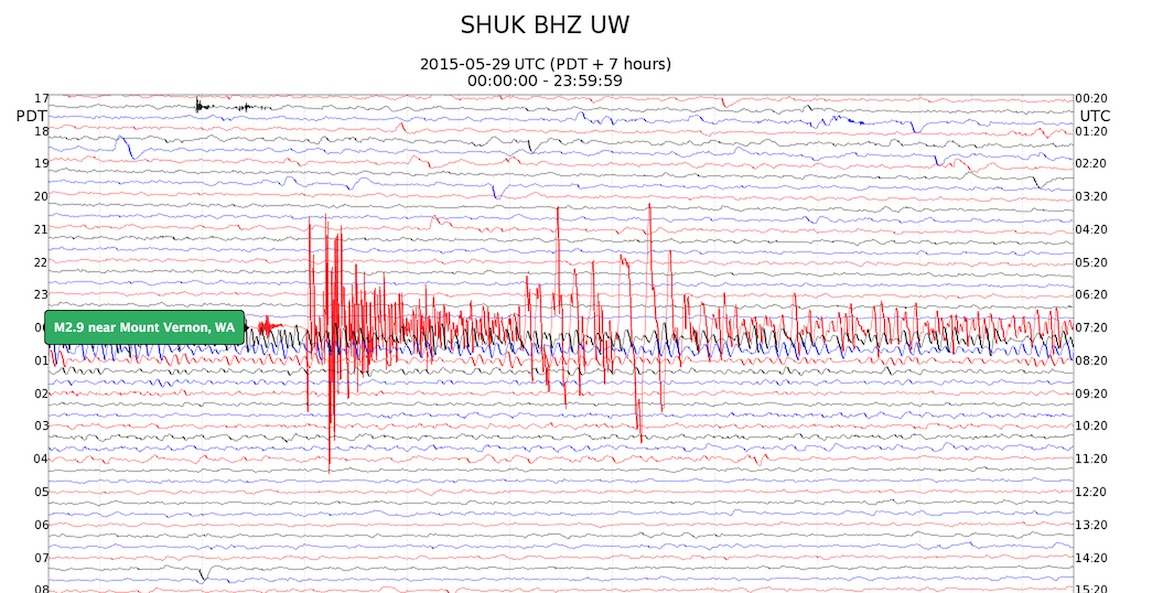 Very, very early this morning the pager started going crazy again. A DUBIOUS M5.2, DUBIOUS M5.0, DUBIOUS M4.1, DUBIOUS M4.2, and a DUBIOUS M5.3. Our system had been tricked again! It immediately started saving waveforms for each of these big events which bogged down the system. This time my fellow seismologist on the conference line to commiserate with was Steve Malone.  The U.S.G.S. page showed a big red dot south of Japan (Bonin region), which was labeled M8.5 at the time (it was later revised to M7.8) and there was a red dot in California, again. I knew to be skeptical about that one! We had gotten lucky again and our DUBIOUS filter had trapped our poor earthquake solutions in our building and never let them escape. The California event later was cancelled because it too had been a wrong solution for the Bonin earthquake.

Our Demo Earthquake Early Warning System did send 5 false warnings, it claimed that five magnitude 5 to 6 earthquakes occurred in a region spanning from northern Vancouver Island, Washington, Oregon, into northern California. Hopefully all the beta-users slept through the alerts or had their computers off.  If we could have, we would have cancelled all those events because NONE of them were real!

This is why earthquakes disappear. 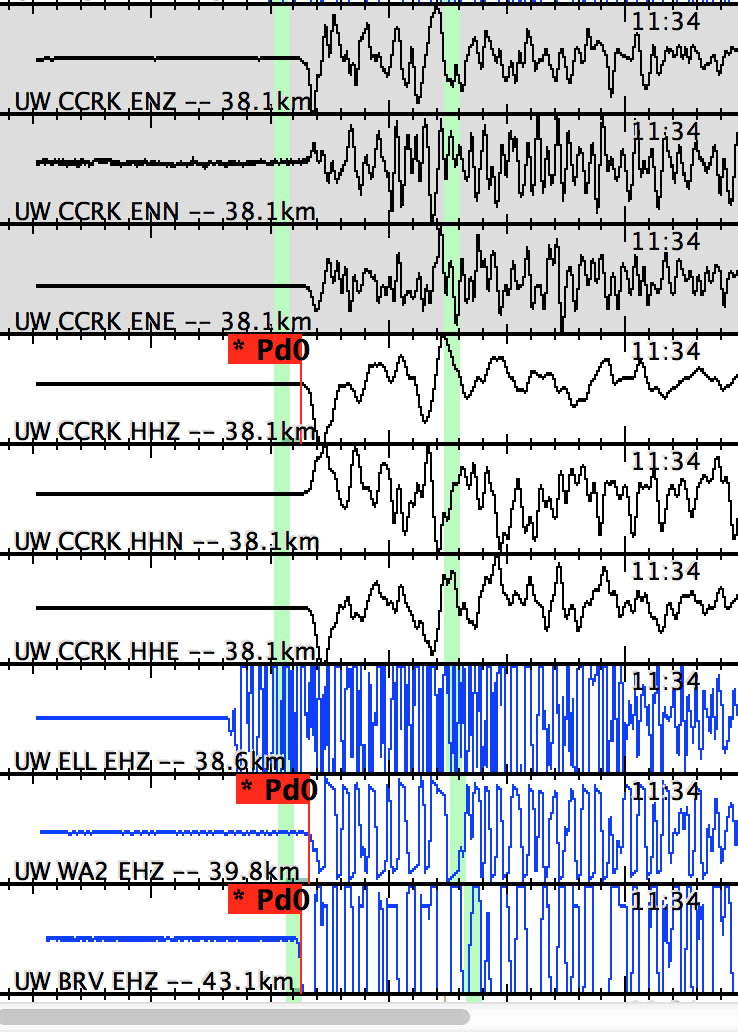 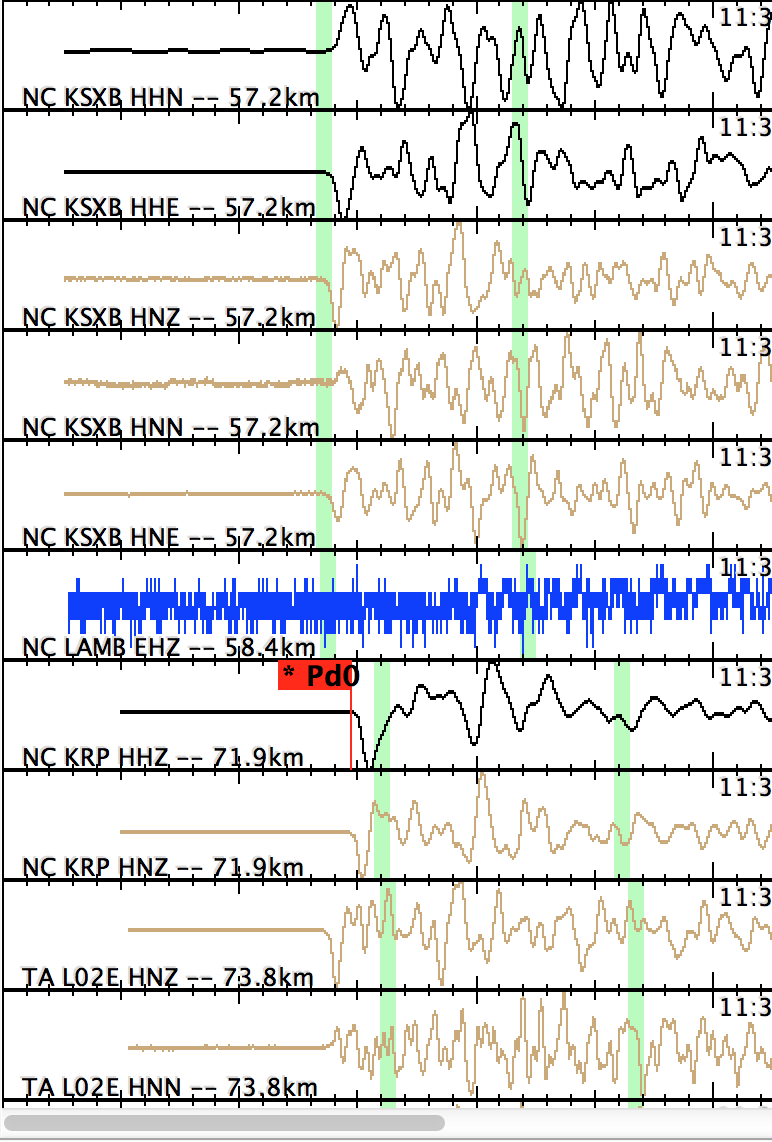 Earthquakes disappear because automatic systems are computer algorithms that cannot think for themselves.  When waves from distant earthquakes or anthropogenic noise sources create waveforms that look similar to  those from local earthquakes, the system may get it wrong. Look at the waveforms from the Japanese earthquake recorded in Washington (top) and northern California (bottom) in the Figure on the left and you'll understand why the computer algorithms thought they were from local earthquakes!!! To a trained seismologist it is completely clear that these are waves from a distant earthquake (although it is impossible to tell from the lower three, clipped, records in the top panel).

Because we aim to notify the public as soon as possible, we typically send our automatic solutions out without review by a person.  At the PNSN we do require that the automatic solutions have relatively small uncertainties before we send them out. This is what protected us from sending out the poor solutions for these teleseisms. The California networks have their own way of preventing notifications of bogus earthquakes caused by far away events and it usually works.  However, just like our system is not completely fool-proof neither is theirs.  This is the downside of open science; if you want to see everything our systems detect, you will also see its mistakes. Hopefully this post helps clear up some confusion! If people are interested in how often teleseisms trigger our network and how often our bad solutions make it out into the world, let me know in the comments and I'll write a different post about that.