As reported in a blog shortly after the central Oregon ETS began it seemed like Cascadia had tremor going in many areas.  This has continued and seems to still be going on even though the Oregon ETS had its last tremor burst on Mar 31.  The Oregon ETS covered a similar area and lasted about the same length as the two previous well-recorded ETS in the region.  These three figures show a blow up of the central Oregon ETS region for these three ETS events.

Colors are time sequence from early (blue) to late (red)

Note that for the 2009 event it started in the north (just south of the normal Washington ETS area) and progressed uniformaly southward.  The 2011 and 2013 ETSs started in the middle (between Salem and Portland) and spread from there, sometime hopping back and forth but ending in the north.

It is interesting to compare the amount of tremor during this latest ETS to that in the rest of Cascadia during the same 36 day period.  There were almost 300 hours of tremor during this ETS and just under 200 hours during the same period over the rest of Cascadia.  The figure here shows the rest of Cascada (Oregon ETS removed) again color coded by time.  Note that in each area tremor only lasts for short time periods (mostly one or two, separated colors).  We think these represent small slow slip events, usually too small to be detected geodetically and thus are not true ETS.  See the previous blog on when is an ETS an ETS. 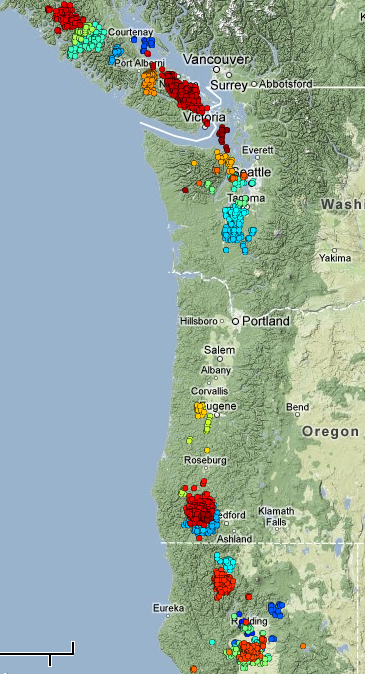