Debunking another SEC football myth by the PAC-12

Debunking another SEC football myth by the PAC-12

Ironically, reports of the Seahawk thunderclap (see previous blog entry) led some to claim it was just a late copycat an SEC original.  They said the 1988 LSU-Auburn game registered on a seismogram following a game-winning touchdown.  In order to give the Seattle signal its proper place in history, it is important to dismiss the prior claim.

Here is a patched-together piece of the seismogram from the “Earthquake game”.  The wiggly lines record the ground motion, with the little bumps showing the passage of each minute.  Each revolution of the seismic recorder takes ten minutes – we are seeing five minutes in the image.  The black blur in the middle is reputed to be the fans cheering, recorded 1000 feet away in the Geology Department.

Here is a close-up, with the arrow showing one minute’s time. 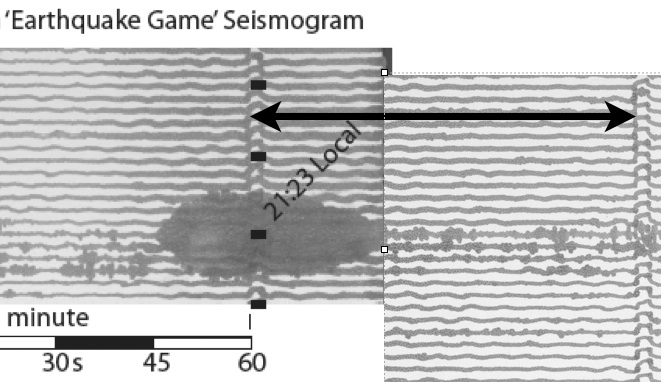 The claim does not bear up, and likely was not the roar of the crowd.  No signal even a tenth as big was seen at the time of the extra point 50 seconds later, which actually won the game.  The time of the noise on the seismogram was 9:23 pm, while the one reference to the time of the touchdown found by us is 9:32 pm.  The game up to that point appeared nearly silent to the seismometer, except for some noise 11 minutes earlier and a short burst at 1:15, in the half of the time that is visible (5/10 minutes per revolution) for the prior 2.5 hours.  And the bursts afterwards do not have the tempo expected for a football game, so just a mistake in marking the seismogram of reversing time wouldn't help much.

This week, while writing up this clearly erroneous reporting, I found a 2007 blog from the losing side, Auburn, offering a rebuttal of the official story.  The blog suggests that ESPN essentially created the earthquake hype out of a dubious seismogram a year or more after the LSU-Auburn game.

Perhaps the stands had a special resonant personality that night, and jumping in them both drove the especially strong vibrations and destroyed the seating that fostered it, as the second comment on the blog claims.  I don’t believe it either, I think the signal did not come from the stadium, but can’t think of an obvious way to prove it wrong.

I must admit the Lynch Seahawk signal is not the first football-related noise captured on a seismogram.  No doubt it has happened numerous times, even in Seahawk games earlier in the season, as could be seen on the graphic of all the home games in the last blog entry.  Boise State has had well studied recordings of the roar of the crowd, for example.

However, the Seahawk signal was real and really loud, a signal the PNSN is proud to have reported.  The hype from the SEC often is just that.